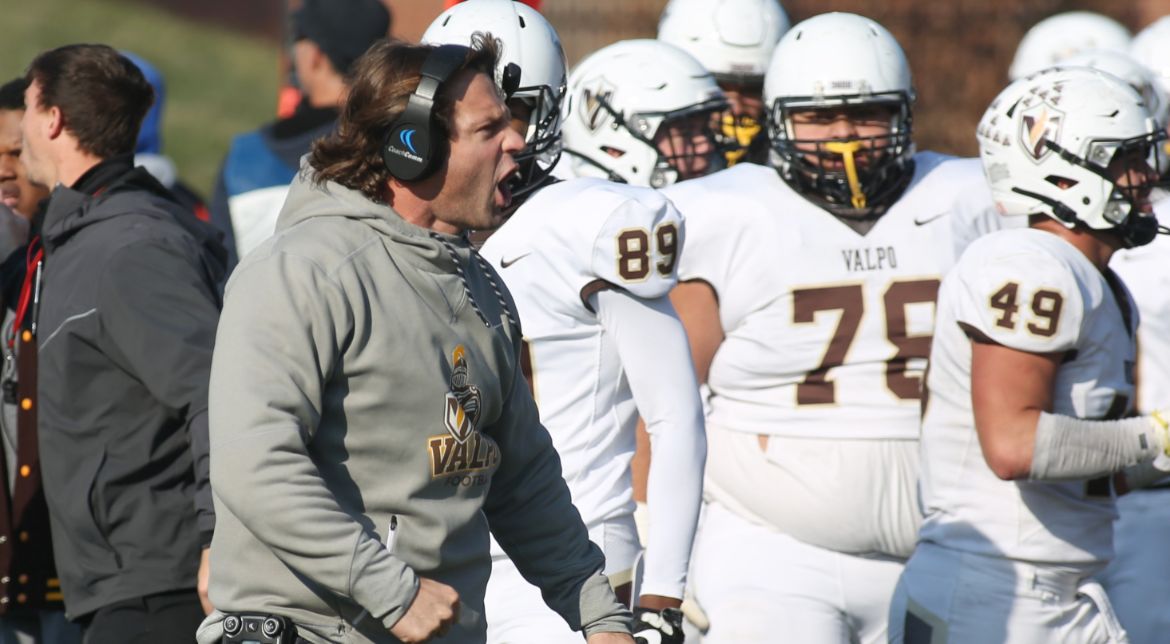 The early signing period started with the addition of 13 players to the Valparaiso University football program on Wednesday. Head coach Landon Fox has announced the first batch of recruits who are set to join Valpo’s program for the 2020 season.

“The first thing we were looking for is players who excel in the classroom and on the football field,” Fox said. “As you can tell based on the academic backgrounds of these players, we put high emphasis on success in the classroom. We knew we had a heavy need on the offensive line as we’re continuing to build depth at that position. It was important for us to participate in the early signing day, and we’re thrilled these 13 players are excited about the academic and athletic opportunities they will have here at Valpo. Many of them participated in our summer camp, and we’ve been able to build those relationships. Many of these players were also team captains in high school, an important attribute as we add young leaders to our program.”

A three-year varsity letter winner in football, Carpenter also earned four letters in rugby. The team captain is a two-time all-conference honoree and a Chicago Tribune all-area performer in football. The son of Maureen and David, Carpenter has two siblings: Kathleen (21) and Kelly (21). He will continue a family trend of competing in collegiate athletics, as sister Kelly plays basketball at Edgewood, and the following cousins have also competed collegiately: Ryan Assmusen (Cornell basketball), Michael O’Laughlin (West Virginia football) and Casey O’Laughlin (Northwestern baseball).

Fox on Carpenter: “We saw Sean in the summer and have really enjoyed building our relationships with him. He is versatile and has played both offensive and defensive line. We’re excited to welcome a team captain and multi-sport athlete to our program.”

A two-year varsity letter winner, Heinrich earned numerous prep accolades including all-conference, all-county, all-state, academic all-state and All-American Central Indiana Super Team Honorable Mention. After earning first academic honors in high school, he plans to major in mechanical engineering at Valpo. A team captain as a senior, Heinrich is the son of Laura and Erick and has two sisters, Allison (20) and Meaghan (24).

Fox on Heinrich: “Daniel is an accomplished student in the classroom, and on the field he’s a player who moves well. He has good feet and will continue to put on weight when he arrives on campus. We’re thrilled to add another instate recruit to our program.”

A four-year varsity letter winner in football, Vickers also played two years of varsity basketball. The two-time football all-conference performer served as a team captain on the field and was an honor roll student in the classroom. The son of Ryan and Heather, Vickers has a 15-year-old brother, Cole. He intends to major in biology at Valpo.

Fox on Vickers: “Jake is a tight end who has the ability to play both on the ball and off the ball. He’s physical in the run game but can still get out in routes and make catches.”

A three-year varsity letter winner in football, Kelley also earned four varsity letters in track & field and two in wrestling. An honorable mention all-state and first-team all-conference performer, Kelley was twice on his school’s honor roll. The son of Christina and Gerald, he has a 14-year-old brother, Matthew. He intends to major in mechanical engineering at Valpo.

Fox on Kelley: “Jonathan is a big offensive lineman who is physical in the run game. We’re thrilled to add the physicality he brings up front.”

A two-year varsity letter winner on the gridiron, Covert also earned two varsity letters in track & field. The 2019 team captain is the son of Kim and Tom Covert and has three sisters: Libby (15), Emily Kate (13) and Meghan (9). He plans to major in nursing at Valpo.

Fox on Covert: “Andrew is another big offensive lineman who has the ability to get people off the ball. He’s an eagle scout, which is a good accomplishment that speaks to him as a person. He’s a great academic fit for our institution as well.”

A three-year varsity letter winner in football, Garrard added one letter apiece in golf and baseball. The 2019 team captain is a member of National Honor Society. His family includes parents Heather and Kevin and sister Emerson. Garrard plans to major in business upon his arrival on campus.

Fox on Garrard: “Nolan is a tall offensive lineman who is 6-foot-8 but has played center. We like his feet, which is no surprise since he’s another multi-sport athlete.”

A three-year varsity letter winner in football, Kessen also earned four letters in baseball and two in powerlifting. His football accolades include all-region and all-county (twice) honors, while he was also named his team’s defensive MVP on two occasions. Academically, he is Utica’s valedictorian and is a three-time Top STEM student and an all-academic honoree. He will pursue a mechanical engineering degree at Valpo. Family members include parents Kelly and Mark and sisters Alexa (20) and Brooke (15).

Fox on Kessen: “Kurt is a very strong student. He has the ability to play on both sides of the ball. We recruited him as a defensive end, but he also has the skills set to play tight end. He’s a good all-around athlete.”

A three-year varsity letter winner in football, Folkestad also won one varsity letter in track & field. His long list of football honors includes the coaches’ award, the 2019 NFL Cardinals Corey Peters Lineman MVP Award, the Arizona Varsity Rivals Beast of the Week and his school’s 2019 defensive lineman of the year. He has great success in the weight room, where he is a member of the 500, 1000 and 1300 pound clubs. He set the 2019 Arizona Max Bench Press record for ages 16-17 in the 220-pound weight class. The son of Lisa and Bradley, Folkestad has a sister Tatum (15). His father Bradley played soccer at California Lutheran University from 1979-1982 and his grandfather David Folkestad played football at St. Olaf College from 1953-1956. In the classroom, he is a member of National Honor Society, has received the varsity football honor student high GPA award three times, has been on the honor roll every semester of high school and has received Academic All-Star of the Week from Arizona Republic. He intends to major in engineering at Valpo.

Fox on Folkestad: “Chase is a player from Arizona with a high motor. He has an ability to come off the edge and creates big plays because of his effort.”

Evans helped his team to an 8-3 record this season, earning a varsity letter for the third straight fall. He has nabbed one varsity letter in basketball and hit a game-winning shot against Saint John’s on the hardwood. The 2019 team captain is a member of his school’s honor roll. The son of Lisa and Brett, Evans plans to major in engineering or business.

Fox on Evans: “Preston is another really good student. He is one of the guys who we created a relationship with at summer camp. He can play on both sides of the ball. He runs well, and we’re excited about the flexibility he brings to the table.”

A two-year varsity letter winner in football, Byrd also plays basketball and baseball. The academic honor roll recipient plans to major in education at Valpo. The son of Renee and Kevin, Byrd is the brother of current Valpo offensive lineman Aaron Byrd. He has one sister, Molly Altmyer (29).

Fox on Byrd: “His decision to join our program tells you that his brother speaks highly of his academic and athletic experience at Valpo. Derek is another big-body player. We were at one of his games this season, and we’re excited about his ability to sustain blocks.”

Fortner earned three varsity letters in football while also competing in track & field and baseball. He helped his team to a 32-5 record during his career, earning all-league status as a junior and first team all-league as a senior. The recipient of the Archie Griffin Sportsmanship Award, Fortner also earned the Pat Tillman Faithful Service Award. The 2019 team captain was a Top 10 state placer in DECA (Distributive Education Clubs of America). Both of his parents competed in collegiate athletics as his mother Joy played softball for four years at Hiram and his father Tom played football for two years at Mercyhurst. He has two brothers, Myles (15) and Matt (11). Upon his arrival on campus, Fortner plans to pursue a degree in business sales and marketing.

Fox on Fortner: “Mason has very good feet at the offensive line position. He can get to the second level, and we see him as a potential center for us. We also love the fact that he comes from a winning program and knows how to have success.”

A two-year varsity letter winner on the gridiron, Backes also grabbed two varsity letters in track & field. He also played baseball and lacrosse during his prep tenure. He was a two-time all-conference selection, a captain as a senior and an ESPN UW Summit Credit Union Player of the Week. Backes helped his team to a 10-2 mark during his junior season and an 8-4 record during his senior campaign. Backes has been a member of the high honor roll every semester of high school, earning an academic letter and pin. His family includes parents Gina and Greg and his sister Arianna (8). Backes intends to major in psychology at Valpo.

Fox on Backes: “Dominic is a really high-end student. He can play multiple positions on the defensive side of the ball. He’s very efficient in his movement and runs well. He brings physicality to the table.”

A three-year varsity letter winner, Robbins was named an all-area, all-conference and all-state performer. A team captain during his senior season, he has earned academic all-state honors as an honor roll and National Honor Society student. The son of Bill and Krista, Robbins has one brother: Will (20). He plans to major in mechanical engineering.

“Landon is another very good student. He’s physical to the point of attack and does have the ability to run sideline-to-sideline.”