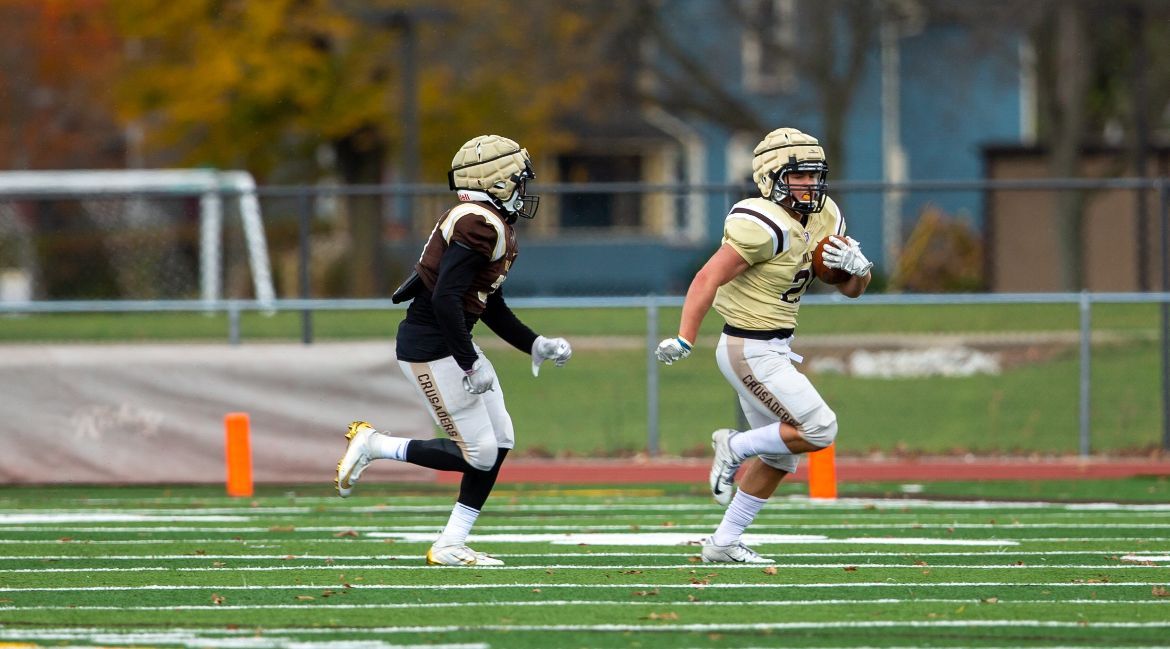 Although it may not have been the typical fall season filled with Pioneer Football League competition, the Valparaiso University football program provided a meaningful experience and opportunities for team and individual growth during the 2020 fall semester.

After the PFL announced that the league slate would not take place as planned this semester due to the COVID-19 pandemic, head coach Landon Fox and his staff pivoted to a Plan B that allowed the student-athletes to experience a practice and workout schedule similar to a typical spring season.

“We were excited to get back together as a team after being apart during the spring and summer,” Fox said. “This fall was an important opportunity for our newcomers to meet our returning players and begin building those relationships. Sure, we want to win football games, but as a student-athlete, it’s the experiences you go through with your teammates that mean the most. One of our program’s core values is competition, so we did what we could to create a competitive environment with several scrimmages this fall.”

Although the barometer of success provided by the scoreboard on a weekly basis during a typical season didn’t exist during this atypical autumn, Fox and his staff were pleased by what they saw on the Brown Field turf each practice.

“I’m excited about the entire team,” Fox said. “Each and every person on this football team performed well this fall. They were able to adapt and overcome uncertainty. We were able to establish a new routine that created a little more normalcy even though this year was different from what we’ve done in the past. I’m excited about the progress each of our student-athletes made from the start of fall practice to where we are now. We accomplished our goal of improving as a team.”

When Chris Duncan (Woodland Hills, Calif. / Woodland Hills Taft) elected to return for one final season and to pursue a master’s in business administration after completing his undergraduate studies, he certainly didn’t anticipate a year like this one.

However, Duncan has continued to lead by example through the adversity faced this fall.

“You have to give a lot of credit to our fifth-year senior captain,” Fox said. “To go through the uncertainty from spring to summer to where we’re at now, he could have decided to graduate and go in a different direction. He didn’t do that. Instead, he’s showed outstanding leadership and even as a fifth-year senior, he made improvements from the beginning of the fall to now. We’re excited about Chris.”

Duncan threw for 1,658 yards and 10 touchdowns last season while also finishing as the team’s leading rusher, netting 386 yards on 113 carries plus six scores. He already ranks eighth in program history in career passing yards at 3,725 and seventh in total offense at 4,374.

Wide receiver is an area of strength for Valpo’s offense, led by the return of a pair of All-PFL Honorable Mention recipients in Ollie Reese (Franklin, Tenn. / Battle Ground) and Deuce Larose (Fort Lauderdale, Fla. / Cardinal Gibbons). Reese had 34 receptions for 545 yards last season, while Larose accumulated 484 yards on 30 catches.

“Ollie and Deuce continued to improve both on the field and in their leadership role,” Fox said. “The talent of our young players will push our more experienced players and make everyone better in this position group. We saw our young players show their ability, and as always practice time is valuable for those players as they get more comfortable with our offense.”

Valpo lost its top three running backs to graduation after last season, creating an opportunity for newcomers and veterans alike to compete for playing time at the position.

“We had the opportunity to give a lot of newcomers chances to run the ball this fall,” Fox said. “They showed us that they can contribute significantly to our program in the future. Running back is one position that is always a concern when you’re not playing games, but we like the progress this group made.”

“I saw vast improvement from our tight end group in the running game this fall,” Fox said. “They also showed better body control in the passing game. Brett did a good job making plays. Alex, Holden and Jake all showed some glimpses to be excited about in the future.”

“We’re young on the offensive line, and that group got considerably better from Practice 1 to the end of fall camp,” Fox said. “Coach Bustle has done a great job of keeping it simple to allow those players to execute at a high level. Aaron did a great job and you could see his improvement from last season. We saw Drew improve throughout the fall, and Jeremiah gave us reasons to be excited about what he can do in the future.”

“We have defensive linemen like Tre, Austin and Drew who were productive last season and we saw them grow this fall and continue to make themselves better players,” Fox said. “We’re trying to build some depth. We’re excited about Evan Satoski; he had a really good fall. He’s consistent, tough and embraces our core values.”

Similar to the defensive line, Valpo has several contributors back at linebacker that played a part in the team ranking in the Top 5 in the PFL in scoring defense, total defense, rushing defense and passing defense in Year 1 under Fox.

Senior Gavin Twigg (Acworth, Ga. / Allatoona) has moved from rush to Will linebacker, while redshirt freshman Evan Annis (Hilliard, Ohio / Hilliard Davidson) had a strong fall camp and is developing into a team leader. Redshirt sophomore Trey Psota (Bay Village, Ohio / Bay) had a good fall and continued to develop.

“Gavin moved to a somewhat similar position and had a really good fall camp,” Fox said. “Evan and Trey performed well this fall also. We have to continue to build depth at that position. There are freshmen who have showed flashes, and we want them to continue to increase their understanding of our system.”

“I’m extremely excited about the depth we have at the corner position,” Fox said. “It will allow us to get into a bit of a nickel package at times. Henry and Kohlton embody what we’re looking for in our program in terms of consistency on a daily basis. DJ and Jadarius will both play important roles for our football team, providing significant depth at that position.”

Junior Michael Scarsella (Valparaiso, Ind. / Valparaiso) and redshirt junior David Hebda (Brighton, Mich. / Gabriel Richard) both had significant playing time in 2019 at the safety position and continued to improve throughout the fall.

“Freshmen and redshirt freshmen are going to have to continue to develop for us to build depth at safety,” Fox said. “There are a number of players all grouped together at that position, so we’re excited to see how that plays out.”

“We saw a lot of improvement from Brian this fall compared to last fall,” Fox said. “We’re excited about him heading into this spring.”

Up Next: Part 2 in our Valpo football fall update features player reaction to the fall season.