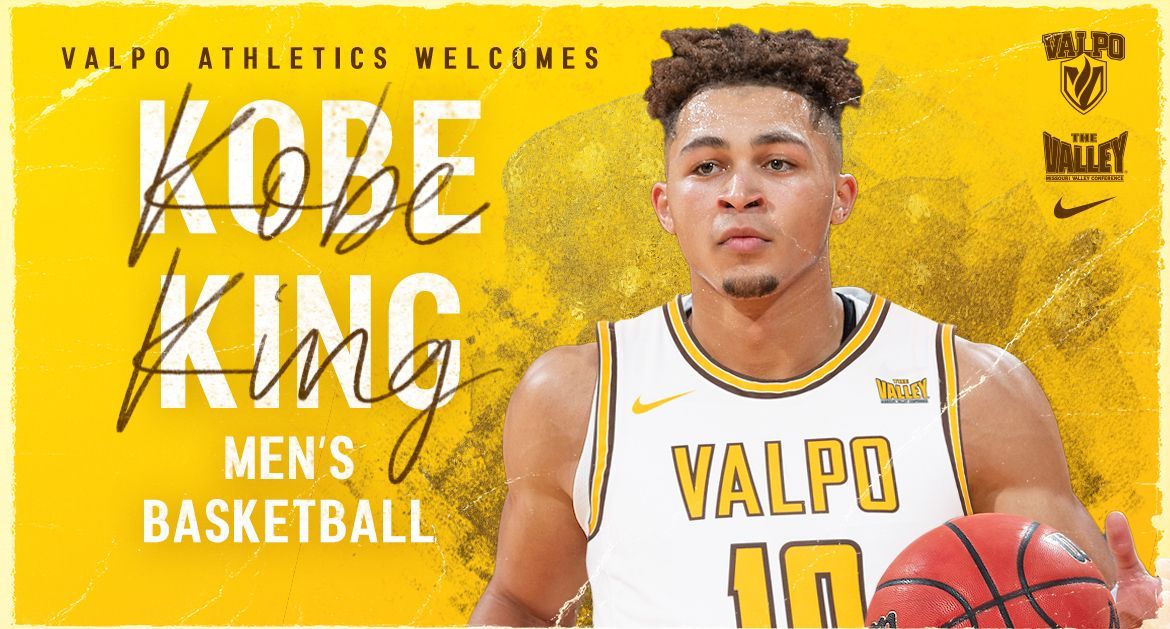 The Valparaiso University men’s basketball team has announced the addition of Kobe King (La Crosse, Wis. / La Crosse Central [Wisconsin]), who has joined the program for the 2021-2022 season.

King appeared in all 34 games for Wisconsin in 2018-19, then started all 19 games he played and averaged 10.0 points per game for the Badgers in 2019-20. During Big Ten games, King averaged a team-high 12.6 points per game over nine contests, all starts. He shot a robust 52.2 percent from the floor in conference action, hitting 48 of his 92 attempts.

“Kobe is someone who we’ve known for years and recruited out of high school,” Valpo head coach Matt Lottich said. “We followed his success throughout high school, and his experience in college basketball is well-documented. We knew Kobe was an athlete who could add to a group that we already liked a lot. He’s very strong and athletic. He has played in a lot of high-level games. If we were going to add to our roster, we knew we wanted someone with significant experience who would be the right fit for our program, and Kobe checked all the boxes.”

King, who made 20 starts and saw action in 63 games during his Wisconsin tenure, was limited to 10 appearances as a true freshman in 2017-2018 due to an injury. He was named the 2016-17 Wisconsin Mr. Basketball, earned Gatorade Player of the Year and was a unanimous selection for the Associated Press Player of the Year after leading his La Crosse Central team to a 26-2 record and the program’s first state championship since 1925.

“I’m excited to be reunited with teammates who I have great memories with,” King said. “The familiarity that we have with each other will help our comfort level on the court. I was on campus as a sophomore in high school and Valpo felt like the right fit. I’m glad it all worked out.”

As a sophomore, King was an all-conference honoree who averaged 16.0 points per game. He scored 2,060 points during his prep career and was also a standout in track & field, winning the Mississippi Valley Conference crown in the high jump (6-8.5) and long jump (22-10).

“I’m a three-level scorer,” King said. “I’m a guard who can also post up. I have the ability to push the tempo and get up and down the floor. I can play the ‘4’ if needed and I bring defensive versatility. My assignment would often be to guard the best player – either the 2, 3 or 4 – on the opposing team. Once I get back into the swing of things, it’ll be like riding a bike. I’m thrilled to get back on the court.”

King’s favorite basketball memories to this point are winning the state title as a high school senior and a 64-54 upset victory over No. 2 Michigan on Jan. 19, 2019 in Madison. Michigan entered the matchup with a 17-0 record. King saw 31 minutes of action and had six points and five rebounds.

King, who is pursuing a degree in sociology of sport, said the Valpo coaching staff played a key role in his decision to join the program.

“I’ve heard many positive things about them and all of my conversations with them echoed that,” he said. “I can tell they have my best interests at heart. The most important thing was the personal conversations that I had with them. They also worked hard to put me in a position to be able to play again. I started working with the coaches and knew that this is where I should be. I’m glad it all worked out.”

King is the son of Julie Platten and Chris King, who played collegiately at Wake Forest and was a second-round pick of the Seattle SuperSonics in the 1992 NBA Draft. Chris played professionally from 1993-2008, spending time with Seattle, Vancouver and Utah in the NBA as well as stints overseas and in the CBA. King’s cousin, Jimmy King, was a member of the University of Michigan’s Fab Five team and played professionally for 10 years.

Off the court, King enjoys making music and writing song lyrics. But his newest hobby is spending time with the 2021-2022 edition of Valpo men’s basketball – rekindling old friendships while laying the foundation for new ones.

“All of my new Valpo teammates are great people, that’s the first thing I noticed,” King said. “The whole team came over for an NBA playoff game as soon as I got to town and we spent time together talking and hanging out before I had seen any of them play. It was clear to me right away that we have high-character players and I think this group can be something special this year.”