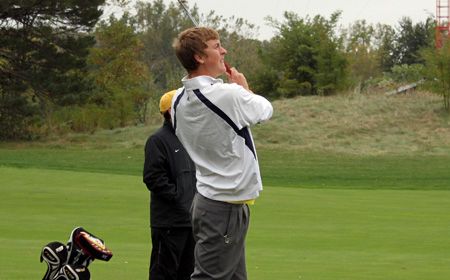 The Crusaders shot a final round 285 to finish the tournament at 860, the best 54-hole tournament score in program history.  Valpo finished seven strokes behind Butler for second place and 11 shots behind tournament champion IUPUI.

Wettstein fired a final round 71 to finish the tournament at one-over par 211, the best three round tournament mark in program history.  Wettstein, playing as an individual, finished three strokes behind champion Andrew Wegeng of Butler and two shots behind Eastern Illinois’ David Lawrence.

Austin Gaugert (Lake Geneva, Wis./Badger H.S.) carded an even par 70 for the team’s low round of the day on Tuesday.  He dropped three strokes off of each round throughout the tournament to finish at 219.

Kyle Henning (Brookfield, Wis./East H.S.) and Brad Winters (Elgin, Ill./Saint Edward H.S.) both posted top-10 finishes overall for the Brown and Gold, both shooting 72 in the final round.  Henning finished at 214 to place ninth while Winters was tied for 10th at 215.

Andy Webb (Bedford, Ind./North Lawrence H.S.) also shot 71 over the final 18 holes and finished at 221 while Joe Harris (Washington, Iowa/Washington H.S.) was one stroke better for the tournament at 220 after turning in a 76 in round three.

Valparaiso will return to the course one final time this fall on Oct. 17-18 at the Dayton Invitational held in Kettering, Ohio.