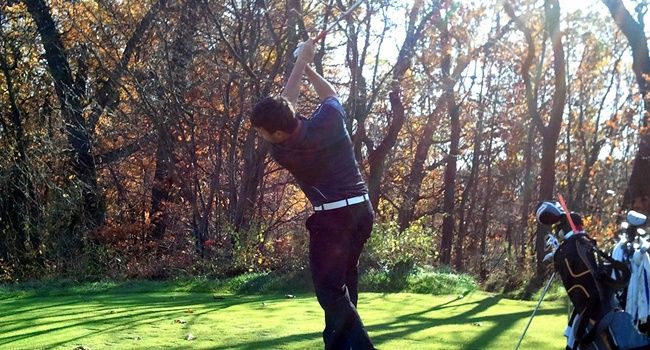 Thomas Wettstein is tied for second after the first round of the HL Championship.
Related Links

Junior Thomas Wettstein (Neenah, Wis./Xavier) fired and even-par round of 72 to be in a tie for second, and the Valparaiso men’s golf team is in third place but just two strokes behind Loyola after the opening round of the Horizon League Championship at the Mission Inn Resort in Howey-in-the-Hills, Fla on Friday.

The Crusaders posted a team score of 301 in the opening round. Loyola leads with a total of 299. Cleveland State’s Andrew Bailey shot a 2-under round of 70 to lead Wettstein and Loyola’s Nick Dennis by two shots.

"The team understands that this tournament is three rounds over three days," Valparaiso head coach David Gring said. "Every day is a new round and we are pleased with our position after day one.

"His round was rock solid with five birdies on a good golf course," Gring said. "His ball-striking today was terrific."

Senior Austin Gaugert (Lake Geneva, Wis./Badger) is tied for sixth after shooting a round of 75. Gaugert made three birdies on his round, including two on the front nine.

Senior Andy Webb (Bedford, Ind./North Lawrence) is tied for 34th place after an opening round 85.

"We lost important shots on the four par-3's today," Gring said. "We need to improve on those. We're looking forward to the second round."

The Crusaders continue play for the Mission Inn Resort on Saturday with the second round of the Horizon League Championship. A link for live stats will be available on www.valpoathletics.com.