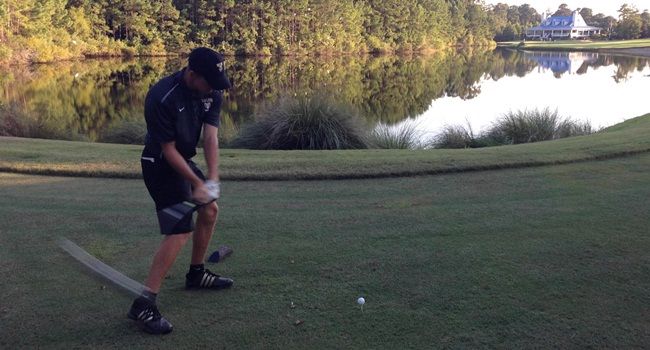 The best single-round performance in team history moved the Valparaiso men's golf team up three spots in the team standings on Monday, as the Crusaders completed the middle of three rounds at the Golfweek Program Challenge at True Blue G.C. in Myrtle Beach, S.C. Freshman Peter Webb (Madison, Wis./James Madison Memorial) enters the final round tied for the individual lead.

Through 36 of 54 holes at the par-72 course, Valpo has posted a team score of 578 (+2) and is tied for sixth place with Western Carolina, a three-spot improvement from where the Crusaders were positioned following Sunday's opening round. Valpo sits just four shots shy of fourth place and seven strokes back of third position.

The Crusaders' move up the team leaderboard on Monday came courtesy of solid rounds from the entire squad, as all four scores which comprised Valpo's team total were rounds of even par or better. The end result was a team score of 283 on Monday, a 12-shot improvement over Sunday's opening round and the third-best team round of the day. The team score of 283 and the 5-under score in relation to par both set new program single-round records, besting by one stroke Valpo's opening round at the Battle in the Tetons in September of 2012.

“Today's round was one of the most steady and consistent team scores that our golf team has ever put together,” said Crusader head coach David Gring. “To have a team score of -5 under par, for our fifth competitive round of this young season, made it a special day. We are looking forward to our final round tomorrow, and continuing some strong play and scoring.”

Valpo was once again led by the efforts of Webb on Monday, as following his round of 67 on Sunday, the rookie followed up with a round of four-under-par 68, placing him in a tie on the leaderboard at -9 through two rounds. The round matched the third-best single-round performance in Crusader history, as well as the second-best individual round in relation to par.

Fellow freshman Nick Seitz (Xenia, Ohio/Carroll) also went under par on Monday, shooting a one-under 71 to enter Tuesday's final round at two-over 146 for the tournament, good for a tie for 29th place.

“For the first two rounds, both of our freshmen have played very solid,” said Gring. “They are leading our team in scoring and have performed very well in a strong field.”

Senior Kyle Henning (Brookfield, Wis./East) and sophomore Matt Ward (Plainfield, Ill./South) both shot even-par rounds of 72 and are at 149 for 36 holes, tied for 35th position. Junior Joe Harris (Washington, Iowa/Washington) rounded out the Crusader quintet with a round of 74 on Monday and enters the final round at 150, tied for 44th place.

Valparaiso closes out the 54-hole event with the final 18 holes on Tuesday.