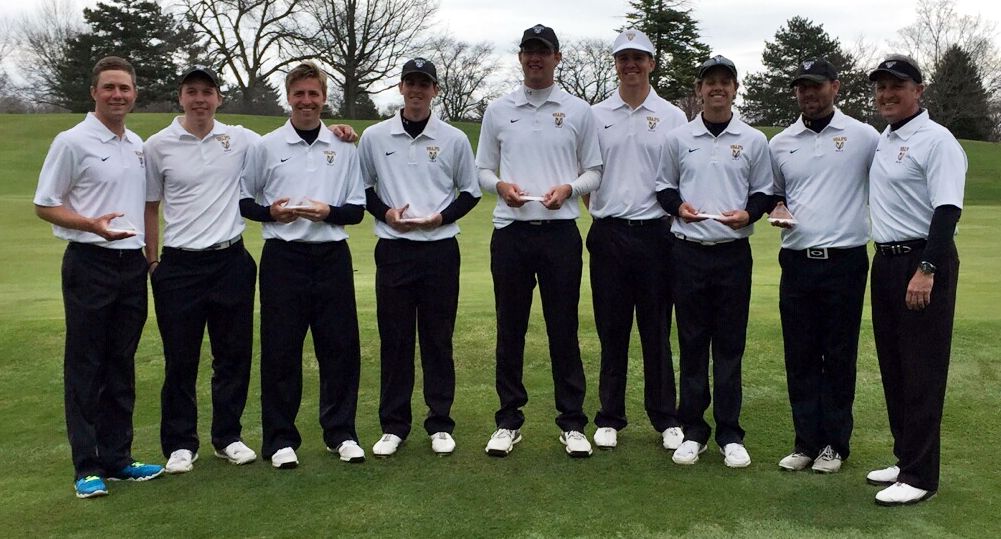 The Crusaders following their title on Monday afternoon.

The Valparaiso men’s golf team claimed its second tournament championship of the season on Monday afternoon, as the Crusaders defeated Northern Kentucky in a playoff by one stroke to bring home the title from the Wright State Invitational.

“This was a terrific team victory with everyone participating across the board,” said Crusader head coach David Gring.  “We had an excellent week of practice leading up to the tournament this weekend.  The attitudes and work ethic of our guys everyday are tremendous, and I'm glad to see their hard work paying off. ”

Valpo shot its best team round of the tournament, posting a score of 291 to make up a seven-stroke deficit on the Norse and finish the 54-hole tournament in a tie with NKU at 880.  The two teams went to a one-hole playoff on the par-five 1st hole, with the Crusaders posting a score of 17 (-3) for the hole to earn the one-stroke win over NKU, which shot an 18 (-2).

“The team playoff was a great experience and the guys were very loose and confident as we prepared for the playoff,” said Gring.  “Eric Winters and Joe Harris, our two captains, led the way with two birdies in the first playoff hole and that set the pace for the other three guys to try to wrap it up.  It was exciting to see the team win the playoff hole, after playing with great desire in the final round.”

The tournament title was this squad’s second of the season, joining the trophy the Crusaders claimed earlier this season at the CSU Cougar Classic.  Valpo now has five tournament championships since the program’s reinstatement prior to the 2009-10 season, as the other three titles came in the 2012-13 season, which culminated in the Horizon League title.

“Every victory is sweet, and this is a tremendous confidence boost to our season as we head down the stretch,” said Gring.  “It was good to get a win back in September and it is great to add this victory this spring.  With two tournaments remaining in our regular season, the guys continue to improve with each event.”

Perhaps just as important as the team victory at this weekend’s tournament was the fact that the event served as a de facto preview of the 2015 Horizon League Championship, which will kick off in less than three weeks.  All seven Horizon League squads were part of the nine-team field, and the Crusaders bested them all, as host Wright State finished in third place, six strokes back of Valpo.

Leading the way for the Crusaders were sophomore Peter Webb (Madison, Wis./James Madison Memorial) and junior Jared Magoline (Fond du Lac, Wis./Fond du Lac [Marquette]), who closed out the tournament in a tie for third place.  Magoline finished out with a round of 75, while Webb matched the Crusaders’ third-best individual 18-hole round of the year with a closing-round 68 as both finished at 216.

The team’s balance helped the Crusaders come from behind and overcome the seven-stroke deficit entering Monday, as all five Crusaders shot final rounds of 75 or better.  Sophomore Nick Seitz (Xenia, Ohio/Carroll) finished in a tie for 16th after 224 after a 74 on Monday, while senior Joe Harris (Washington, Iowa/Washington) shot a 75 to finish at 228, in a tie for 28th position.

Senior Eric Winters (Elgin, Ill./St. Edward) rounded out the Valpo team with a final-round 74 to finish tied for 33rd at 229.  The Crusaders also had two players compete as individuals as well, as freshman Zach Cutler (O’Fallon, Mo./Timberland) finished in a tie for 40th place and junior Matt Ward (Plainfield, Ill./South) closed out the tournament in 60th position.

“After yesterday's 36 holes, we discussed reducing the three-putts, short sides, and playing the par-3’s better, if we were going to have an opportunity to win,” said Gring.  “We only had three three-putt greens, minimal short sides and we played the par-3’s even-par today.  The focus in these three areas was excellent.”

Valparaiso competes in its final tuneup for this season’s league championship event in two weekends, as the Crusaders travel to Raleigh, N.C. to compete in the Wolfpack Spring Open, beginning on Saturday, April 18.