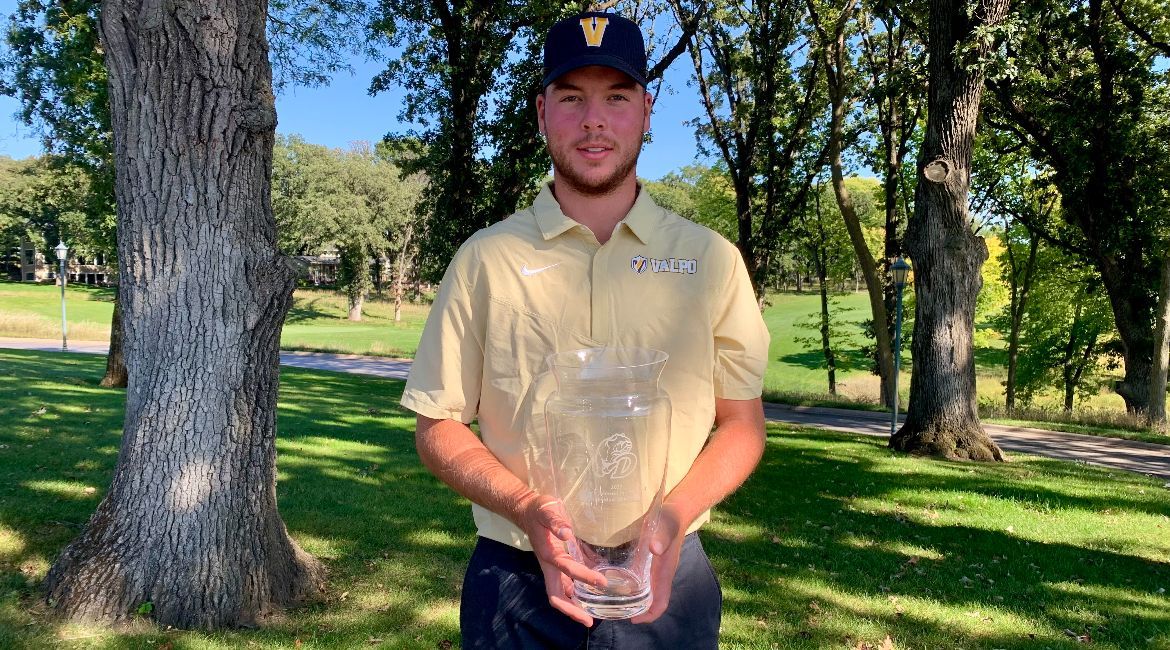 Valparaiso University men’s golf sophomore Anthony Delisanti (Sanborn, N.Y. / Niagara Wheatfield) continued his recent run of success by garnering medalist honors for the second consecutive week as the Drake-hosted Zach Johnson Invitational concluded on Tuesday at the par-71, 6898-yard Glen Oaks Country Club in West Des Moines, Iowa. This time, he shattered program records for both 54-hole tournament and 18-hole round en route to finishing in the top spot in an 81-player field.

“I’m very pleased with our performance this week. The guys played hard and with a lot of determination all three rounds. Coming off our home tournament victory last week and some really good rounds, I didn’t know if expectations would be too high and the team would not play as well. We discussed that and the guys stepped up to the opportunity. North Dakota State is one of the best teams in the Summit League and the same goes for Iowa State in the Big 12. It was good to play with both teams during the final round and have our guys playing head-to-head with them.”

“We didn’t hit as many fairways as we needed this tournament. The green complexes are very solid and trying to get the ball close from the rough was a challenge. Also, we’re still leaving too many five- to 10-foot putts out there on the course, and we’re going to have to improve that range. On the other hand, I thought the guys managed the course well and made a lot of good decisions. We had some poor execution on some holes that led to big scores, so we’re going to need to minimize those. They really affect our overall scores quickly.”

“Anthony is off to a great start to the season. He and the entire team continue to prepare well for our tournaments, not only in actual practice time, but in course review. Anthony hit 50 out of 54 greens in regulation, which is a testament to his shot preparation and execution. He had a few three putts during the tournament, but his putting speed and reading the greens was exemplary. He went about his pre-shot routine in a very disciplined mode for all three rounds and he just stayed focused on the next shot at hand. He pushes our team in practices and the team pushes him, so his medalist victory will be celebrated by all of us.”

The team will be back in action for the Bubba Barnett Intercollegiate hosted by Arkansas State starting on Monday, Oct. 10 at RidgePointe CC in Jonesboro, Ark.