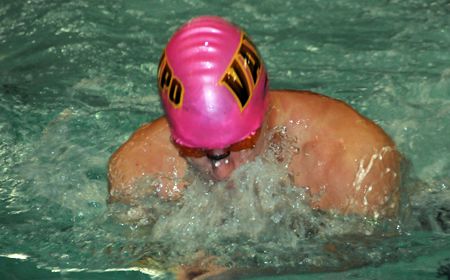 The 2009-2010 swimming and diving season came to a close for Valparaiso on Saturday at the Horizon League Championships held at Flames Natatorium in Chicago, Ill.

The 200 breaststroke saw three Crusaders in the B Final on Saturday night.  Trevor Trimpe (New Palestine, Ind./Connersville H.S.) finished 14th overall with the fifth fastest mark in school history in the event, touching the wall in 2:14.66.  Ryan Burling (Morris, Ill./Morris Community H.S.) was 15th with a time of 2:24.98 while Toshko Ganzorigt (Ulaanbaatar, Mongolia/Orchlon H.S.) also scored for Valpo with a 16th place effort.

David Sivak (Hobart, Ind./Hobart H.S.) added the second fastest time ever for the 200 butterfly in school history in the morning preliminaries.  He finished with a time of 1:55.75, just 0.22 seconds shy of the school record.

Kevin Fedde (Fort Collins, Colo./Heritage Christian H.S.) and Steve Booth (Saint Joseph, Mich./Saint Joseph H.S.) both found the scoreboard in the mile for the Brown and Gold.  Fedde finished 15th with a time of 16:59.77 fourth quickest ever at Valpo while Booth was one place behind him.

Blake Edwards (Orange, Calif./Lutheran H.S. of Orange County) posted the top Crusader time in the morning prelims in the 100 free with a mark of 48.58 seconds, but was not able to qualify for finals.

Valpo concluded the meet with a sixth place finish in the 400 free relay.  The team of Edwards, Austin Hunter (La Crescent, Minn./La Crescent H.S.), Fedde, and Sivak touched the wall in 3:11.42.