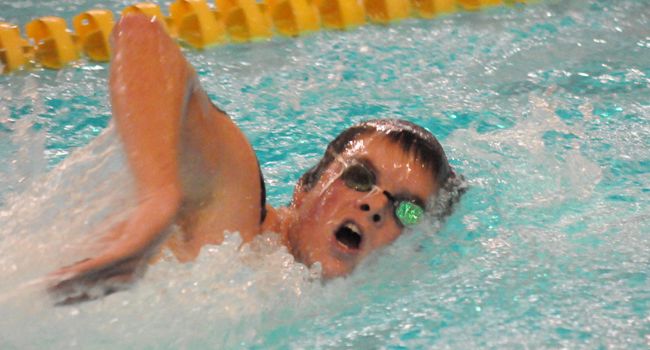 Day one of the Horizon League Swimming and Diving Championships is in the books at the Walter Schroeder Aquatic Center in Brown Deer, Wis. with Valparaiso sitting in sixth place.

The Crusaders scored 53 points on day one and trail fifth place Wright State by 38 points.  Milwaukee holds a three-point advantage over Cleveland State, 152-149 through four events while UIC is third with 125 points.  Green Bay  is fourth, 19 points behind the Flames.

Steve Booth (Saint Joseph, Mich./Saint Joseph H.S.) was the lone Crusader representative in the 1000 freestyle and picked up a point for the team with his 16th place finish.  The junior touched the wall in 10:41.06, a season’s best.

The Crusaders wrapped up the day with the fifth fastest 200 medley relay time ever at Valpo.  Hunter, Trimpe, Kevin Fedde (Fort Collins, Colo./Heritage Christian H.S.), and Braun posted a time of 1:36.82 to finish sixth in the race.

Valparaiso will return to the water on Thursday morning for day two of the four day championships with preliminary heats beginning at 10:30 a.m. with the evening finals commencing at 6:30 p.m.