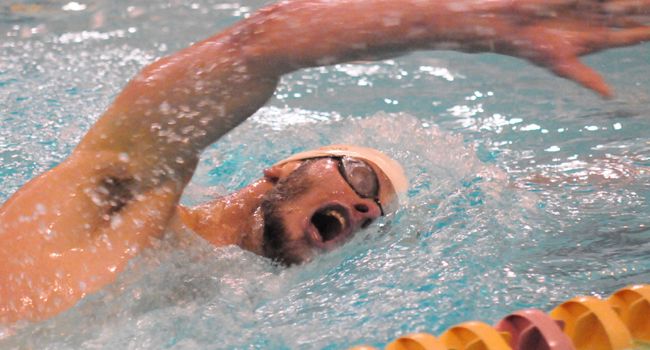 Valparaiso remained in sixth place after Thursday at the midway point of the Horizon League Championships held at the Walter Schroeder Aquatic Center in Brown Deer, Wis.

The Crusaders have scored 86 points through eight events and trail fifth place Green Bay by 41 points.  Milwaukee leads the way with 341 points followed by UIC (289.5 points) and Cleveland State (286.5 points).  Wright State is fourth with 179 points.

Trevor Trimpe (New Palestine, Ind./Connersville H.S.) led the way for the Brown and Gold turning in the second fastest 500 freestyle time in school history.  The senior touched the wall in 4:42.13 to place 14th overall.  He moved up two spots in the finals after qualifying in the 16th and final spot.

Kyle Braun (McHenry, Ill./West H.S.) also scored for the Crusaders on Thursday, finishing 15th in the 50 free.  The freshman turned in a finals time of 21.45 seconds, the fourth quickest in Valparaiso history.

In the 200 individual medley, Patrick Sandness (Seneca, Ill./Seneca H.S.), Valpo’s lone entrant, added his best time as a collegian with a mark of 2:08.44.

Valpo also had five more season or collegiate bests turned in on Thursday in the 50 free prelims.  Russell Deghi (Sebestopol, Calif./Analy H.S.) had his best mark of the year with a time of 22.27 seconds while Phil May (Noblesville, Ind./Noblesville H.S.) posted a personal best of 22.51 seconds.  William Mathe (Wauconda, Ill./Carmel H.S.) and Matt King (Clinton, Ill./Clinton H.S.) added their career best marks, finishing within 0.07 seconds of one another at 22.70 and 22.77 seconds respectively while Steven Parker (Fairborn, Ohio/Fairborn H.S.) added his collegiate best with a time of 25.69 seconds.

Having now reached the midway point of the championships, Valparaiso will return to the water on Friday for day three of the four day meet.  Competition will begin at 10:30 a.m. with prelims with the night’s finals slated for 6:30 p.m.