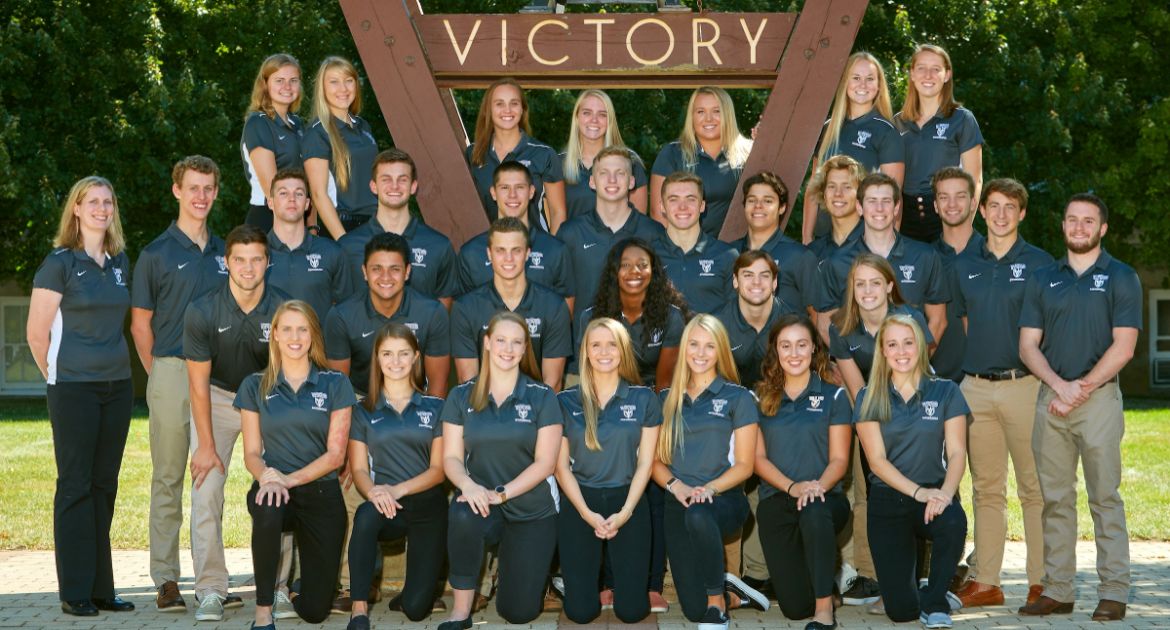 The Valpo men’s and women’s swim teams are ready to compete in their respective conference championship meets starting on Wednesday following a successful season under former swimmer and first-year head coach Maggie Kroemer. The women will compete over four days at the Missouri Valley Conference Championships in Columbia, Mo., while the men will take to the pool at the Summit League Championships in Sioux Falls, S.D.

The women tallied their highest number of dual meet wins since 2014-15, winning four dual meets this year. A pair of seniors lead the way for the Valpo women. Paige Wright (Surprise, Ariz./Paradise Honors) broke the 200 free school record this season, moved into Valpo’s top-three all-time in three other events and was named MVC Swimmer of the Week Oct. 29. Erica Martins (Hartland, Wis./Lake County Lutheran) set a school record in the 100 fly with a time that ranks 11th in the MVC this year and also sits among the fastest swimmers in program history in the freestyle sprints.

The women’s team also has seen a number of freshmen make their mark on the program in their rookie year. Mikayla DePover (Rock Island, Ill./Rock Island) is ranked seventh in the MVC in the 100 breaststroke with a time that sits second in program history, swam the program’s fastest 100 IM time and also moved into Valpo’s top-10 in three other events. Sophie Morelock (Milan, Mich./Milan) posted the fourth-fastest time in program history in the 200 back and cracked the top-10 in two other events as well, while Morgan Markley (Bluffton, Ind./Norwell) already ranks sixth all-time at Valpo in the 100 free, as well as 10th in the 50 free.

The men enjoyed a successful season as well, winning three dual meets - the most in recent history. Five different swimmers moved into or up the program’s all-time charts in a total of 11 events so far this year. Sophomore Derek Eidson (Ventura, Calif./Ventura) moved into fourth in program history in both the 100 free and 200 free and also cracked the top-10 in the 50 free, while sophomore Billy Bennett (Libertyville, Ill./Libertyville) moved up to third in the 100 breaststroke with a time that is 10th-best in the Summit League this year. Senior Brendon Johnson (Northbrook, Ill./Glenbrook North) brought home an individual honor on Nov. 19, as he won the Summit League Swimmer of the Week award.

Like the women’s team, the men’s team has also had a number of freshmen step up in their first season of collegiate competition. Brian Daniels (Brookfield, Wis./Brookfield East) has exceled at the distance free events and enters his first conference championship already fifth in program history in the 1650 free, sixth in the 1000 free and eighth in the 500 free. He also ranks among the top-nine in the Summit League in both the 1000 and the 1650. Gus Rytting (Houston, Texas/Lamar) has moved into Valpo’s all-time top-10 in three different events, highlighted by the second-fastest 200 breaststroke time in program history, a time which sits 10th in the league currently. Ethan Johnson (Ames, Iowa/Ames) already owns the third-best 200 back time all-time at Valpo as well.

Both the men and the women are set to compete over a four-day span Feb. 19-22 at their respective meets. Live scoring and video for both the MVC Championships and the Summit League Championships will be available via ValpoAthletics.com.

“The highlight of this season has been breaking several school records, and we have several other swimmers that are close. I am looking forward to breaking more records at conference.”