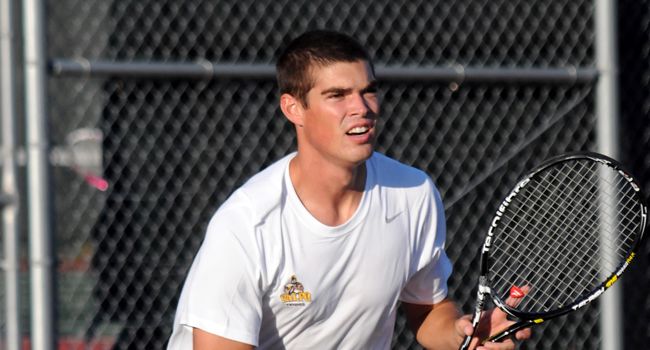 The Northern Illinois Huskies brought Valpo back down to Earth Friday night in Rockford with a 7-0 shutout giving the Crusaders their first loss of the spring schedule.

The #3 doubles team of Michael Savaglio and Michael Baiocchi were ahead 7-6 in their match when teammates Chris Baum and Danny Oakes lost their final game of an 8-6 loss at #2 doubles, thereby giving the Huskies the doubles point and prematurely ending their match against Max Phillips and Jovan Zeljkovic.

Eric Honert and Lucas Waak had dropped their match at #1 doubles earlier 8-2.

At No. 1 singles play, Honert had his three-match winning streak snapped as he was on the wrong end of a 6-1, 7-5 contest.

The freshmen trio of Savaglio, Baiocchi, and Waak all lost in straight sets at No. 3, 4, and 5 respectively.

At No. 6, freshman Brian Hickey took Zeljkovic to three sets before succumbing 10-7 in the third-set tiebreaker.

With the loss, Valpo's record slides to 3-1.  The Crusaders return to the court Saturday morning at 10:30 versus Dayton.