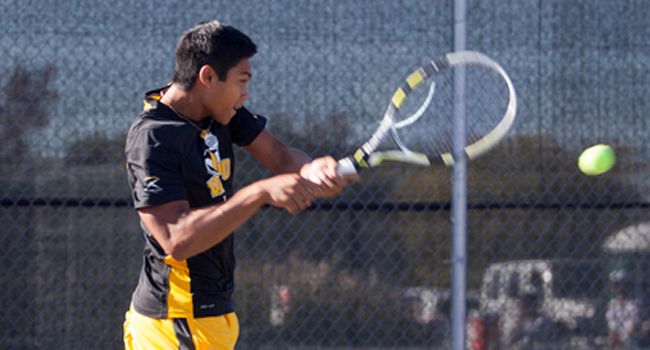 Dave Bacalla and Danny Oakes moved to 6-2 on the season in doubles play Sunday with an 8-1 win at No. 1.
Related Links

A day after giving #75 Purdue all it could handle, Valpo dispatched South Dakota State 5-2 Sunday at The Courts of NWI. With the win, the Crusaders (6-2) remain undefeated at home on the season.

At No. 3, Lucas Waak (Manitowoc, Wis./Roncalli) and Eric Honert (Arvada, Colo./Ralston Valley) brought doubles action to an end with an 8-3 result over Lovro Curcija/Henrique Pereira.

Jeffrey Schorsch (Perrysburg, Ohio) and Charlie Emhardt (Carmel, Ind./Carmel) were ahead 7-1 at No. 2 when Waak and Honert ended doubles play.

Schorsch won his fourth consecutive match at No. 1 singles with a 6-2, 6-4 straight set defeat over Boglic.

Emhardt continued his stellar play at the No. 6 spot with an easy 6-3, 6-1 win over Gary Notkin.

Valpo clinched their sixth victory of the year when senior Eric Honert (Arvada, Colo./Ralston Valley) handed Pereira a 6-2, 6-3 loss at No. 4 singles.

Bacalla boosted his singles record to 14-4 when he outlasted Lawley at No. 2 singles. Bacalla rallied back to win the second set 6-4 after dropping the first set 6-2. Bacalla prevailed in the third set tiebreaker 10-6 for Valpo's fifth team point.

"It was great to see us bring the energy and fight on back to back days. This team continues to improve in a number of areas," head coach Jim Daugherty said.

Valparaiso will have another busy weekend next week with matches at Western Michigan on Saturday and Northwestern on Sunday (8-3).