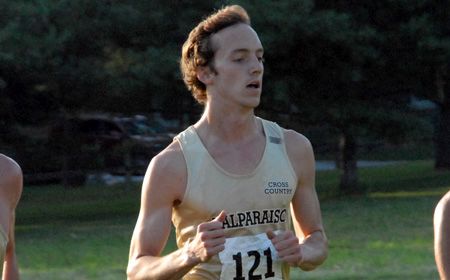 Five Crusader athletes combined for six top-ten finishes as the Valparaiso men’s track and field team took part in the Findlay Classic in Findlay, Ohio on Friday and Saturday.

On the infield, Jarrett Mickens (Aurora, Ill./Waubonsie Valley) posted a pair of top-tens, placing fourth in the triple jump and tenth in the long jump with leaps of 42’10 ¼” and 20’9 ¾”, respectively.  Steve Schubert (Lisle, Ill./Benet Academy) leapt 42’2 ¼” in the triple jump, good for sixth place, while Chris Hovan (Elkhart, Ind./Elkhart Christian) placed eighth, registering a mark of 39’1 ¾”.  In the throws, Nick Babbitt (Milwaukee, Wis./Nicolet) led the way with a toss of 51’7” in the weight throw, good for 13th place and the fourth-longest distance in Crusader history.

On the track, Joel Hartenberger (Albuquerque, N.M./Sandia) led the way with a seventh-place finish in the 5,000m run, crossing the line in 16:10.94.  David Carter (Arlington Heights, Ill./John Hersey) finished the mile run in eighth place with a time of 4:34.85.

Valparaiso takes next weekend off before taking part in the Chicagoland Championships in Chicago, Ill. on Saturday, February 13.