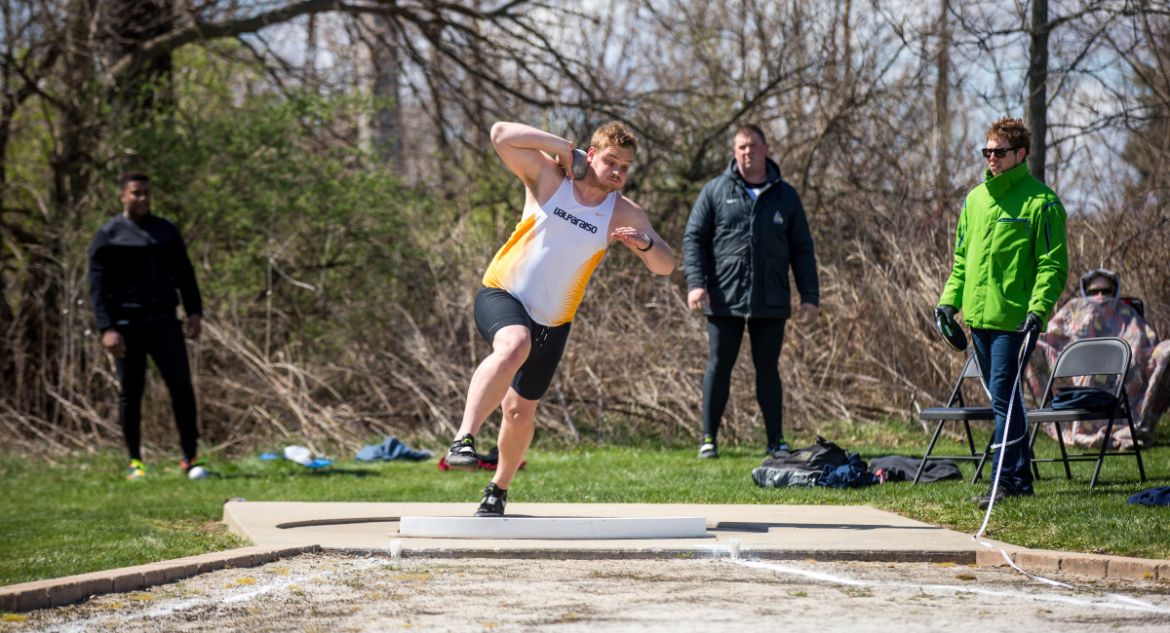 Leading into the 2018-19 Valparaiso University track and field season, the team knows exactly what it needs to do to accomplish its goals this year: Whatever It Takes.

Head coach Ryan Moore, his staff and the program’s student-athletes have placed an emphasis on team building as the group gets ready for Year 2 in the Missouri Valley Conference – a high-level conference in all sports, but perhaps especially track and field.

“We have really come together as a team collectively in recent months,” Moore said. “We’ve spent a lot of time talking about the mission and vision of the program and what we want to do moving forward in the Missouri Valley Conference. We’ve developed what I think is a thoughtful way of being present day in and a day out. We’ve seen a change in our practices and the level of competitiveness that happens each day. My hope is that will transfer over to the season with some great performances on the track and in the field.”

Jake Rasawehr (Celina, Ohio / Celina) is back for his junior season after grabbing a seventh-place finish in the discus at the MVC Outdoor Championships last year with a throw of 158-1. Rasawehr achieved a spot on the MVC Scholar-Athlete team a year ago.

“The outlook is very good for Jake this season after he spent a lot of time this fall honing his skills in the weight throw and the hammer,” Moore said. “That’s going to be beneficial for our program. He’s a discus thrower first and foremost, so he’s been working hard at that all fall. I’m thrilled that he’s having the success that he is in the weight throw. He’ll be a dual threat outdoors for hammer and discus.”

“It’s going to be fun to watch those two develop over the next several years,” Moore said. “Freshman year was about setting the foundation for growth. They had fairly successful freshman campaigns and they’re starting to see consistency in their events come to fruition. Haylee has picked up right where she left off in the weight throw and has increased her throws considerably.”

Maria Greer (Chicago, Ill. / Williams Medical Prep) is a junior leader of a group of women’s throwers that features no seniors.

“Maria didn’t throw in high school at all and has become a valuable asset to our program,” Moore said. “She is guiding the ship for that group of athletes and we have several other women who are helping set the tone by providing pointers and having the right attitude.”

Junior Taylor Allen (Zionsville, Ind. / Zionsville) is right there with Sekuloski among the team’s top sprinters.

“Ben and Taylor are two guys who are definitely leaders on the team who are in it to win it this year,” Moore said. “They want to go after marks and are pushing each other and their teammates. They have a great opportunity as we move through the season to accomplish what they came here to do. Ben has the potential to hit regional times outdoors and we have some other guys who are in that mix as well. It’s always exciting when you start a season and you have an opportunity to qualify people for national championships.”

“Sierra is an extremely hard worker who is dedicated to the sport,” Moore said. “She loves track and field and is one of the people who will push that group. We’re excited to have her for the next couple of years, and the rest of our women will grow along with her. We lack numbers in that area, but that’s a good thing for us right now because that training group can get really close with each other. When it comes to relays during the season, those connections will show when good performances come out.”

Valpo will look to build on a successful cross country season in the distance events.

Alexander Bruno (Bloomington, Ill. / University) will redshirt the track & field season and intends to return next year as a fifth-year senior in both cross country and track & field. He set school records in both the 10K and the 8K this fall.

Both Bruno and Mader were named to the MVC Men’s Cross Country Scholar-Athlete Team this fall, while Bruno garnered All-MVC recognition.

“Jack Mader has a chance to step up and be our leader, and we’ve got other runners who add depth that we traditionally haven’t had,” Moore said. “Guys like Ignacio and Joey have developed a great training group throughout the fall. After one of the better team performances we’ve had in cross country in a while, it’s exciting to have those roots already dug and carry that over into track season. There’s a lot of potential for our distance group to surprise some people and score some points for us.”

Katherine Germann (Cincinnati, Ohio / Finneytown) enjoyed a strong cross country campaign, posting a 5K time at the MVC Championships that ranks seventh in school history and a 6K time at the Bradley Classic that ranks sixth. Juniors Kate Mitchell (Algonquin, Ill. / Huntley) and Taylor Justison (Chatham, Ill. / Glenwood) are among the other runners to watch for Valpo this season.

“Katherine came out of nowhere to run great times this fall,” Moore said. “If she’s committed to running and training that same way during track, she’s going to have a successful spring as well. I’m hopeful runners like Kate and Taylor are able to approach the season with the expectation to perform well. There have been challenges for them health-wise, but now they can ease back into it and start with a clean slate.”

Junior Jeremy Seiler (Angola, Ind.  / Fremont) is back after turning in a 15-5.75 in the indoor pole vault and a 16-0 outdoors last season, ranking third and second in program history, respectively. He earned MVC Scholar-Athlete honors for both the indoor and outdoor seasons after placing seventh in the MVC Championships both indoors and outdoors.

Sophomore T.J. Weinzimmer (Northbrook, Ill. / Glenbrook North) also figures to be a key piece in an experienced group of men’s jumpers. He specializes in the triple jump.

“Jeremy is going to build on his season from last year, and we’ve got a very deep vault crew,” Moore said. “I think those athletes are all set to have strong seasons. We don’t have to worry about developing that group because they’re experienced, so we just need to fine tune a few things. We’re looking for Jeremy and that vault group to continue to push our Top 5 list higher and higher. TJ is one of the most explosive athletes we’ve had come through here. We’re excited to see what he can do with a full year of training for us. He’s another one who could make a run at a regional.”

Sophomore Carli Sowonik (Hebron, Ind. / Hebron) didn’t take long to make her mark during her rookie campaign. She vaulted her way to the top of the school record book with an outdoor height of 12-1.25. She also ranks third in program history in the indoor vault at 11-2.5. Junior jumpers Anne Mou (Bloomingdale, Ill. / Lake Park) and Shannon Lahey (Dixon, Ill. / Dixon) are experienced members of that group.

“Carli is young in the event and still learning, but she’s not afraid to challenge herself to get on a bigger pole and jump higher,” Moore said. “Anne and Shannon have both been extremely helpful from a coaching perspective to keep that group grounded and working hard day in and day out. A lot of good things will happen in the jumps this year, and I know (jumps coach and associate head coach) James (Overbo) is extremely excited.”

Valpo will begin the track and field season on Friday at Notre Dame as part of the Blue & Gold Invitational. Other participants are Bethel College, DePaul, Detroit Mercy, Marquette and host Notre Dame. Field events are scheduled to begin at 3 p.m. CT / 4 p.m. ET and running events at 5 p.m. CT / 6 p.m. ET. A link to live results is available on ValpoAthletics.com.