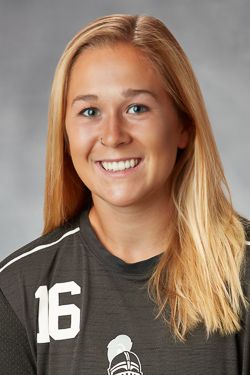 2017: Started 13 matches in goal for the Crusaders as a junior ... posted a 7-6-0 record with three shutouts, recording a 1.27 goals against average and a .761 save percentage ... ranked fifth among MVC goalkeepers in GAA, save pct. and shutouts ... opened season with three consecutive wins in goal, including back-to-back clean sheets in wins over Grace (Aug. 18) and IUPUI (Aug. 20), making five saves in the latter match ... named MVC Defensive Player of the Week Aug. 22 following the pair of shutouts ... made a season-best eight saves Sept. 15 at Western Michigan ... stopped seven shots in 1-0 victory at Missouri State in Valpo's MVC debut Sept. 23 ... earned her second Defensive Player of the Week award from the conference office Sept. 25 following her blanking of the Bears ... also earned victories in MVC play at Loyola (Oct. 7) and at Indiana State (Oct. 22).

2016: Appeared in two matches at goalkeeper for the Crusaders as a sophomore, making one start ... earned victory in Horizon League play over perennial power Milwaukee on Sept. 28, allowing just one goal while making three saves in 2-1 win in extra time ... member of Horizon League Academic Honor Roll.

Prep: A three-year letterwinner for the Spartans ... earned All-Area and All-Conference accolades each of her final two seasons ... a three-year member of the Illinois ODP state team ... helped squad to the ODP national championship match in 2014 ... played club soccer for Eclipse Select SC ... participated in the USYSA National League in both 2012 and 2013 ... helped team to an appearance in the semifinals of the USYA regional tournament in 2013 ... also part of a squad which made three consecutive State Cup finals appearances ... also competed in bowling in high school.

Personal: Drew is the daughter of Greg Brown and Donna Moulton ... major is communication ... minoring in fundamentals of business.