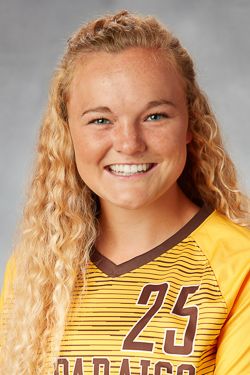 2018: Continued streak of starting every match for the Brown and Gold, starting on defense in all 16 matches ... in fact, did not come off the field once all season, playing all 1,508 minutes ... became first Valpo field player since Janine Lytle in 2012 to play every minute of a full season ... will enter senior year with an active streak of 2,145 consecutive minutes played ... finished season on a high note, recording a pair of assists in Oct. 25 win over Indiana State ... assisted on the match-winning goal and the first insurance goal in the 5-1 win, both of which occurred in a three-minute stretch ... one of three Valpo players with a multi-assist game in 2018 ... finished year with 13 shot attempts, nine of which were on goal.

2017: Stalwart on the back line started all 19 matches for Valpo ... led Crusaders in minutes played for a second straight season, totaling 1,637 minutes of action ... played all 90+ minutes in 17 of the Crusaders' 19 matches ... did not come off the pitch during MVC play ... totaled three shot attempts on the season.

2016: Started all 19 matches for the Crusaders as a freshman, playing a team-high 1,694 minutes ... named to Horizon League All-Freshman Team ... went the distance without being substituted out 17 times ... scored first career goal in win over Fort Wayne Sept. 9 ... assisted on goal in Horizon League victory at Northern Kentucky Oct. 28 ... registered 10 shot attempts on the year, four of which were on goal.

Prep: A three-year letterwinner for the Beavers ... earned GWOC All-Conference accolades and All-Miami Valley honors each of her final two seasons ... helped lead the Beavers to spots in the district final both years ... a member of the Ohio and regional ODP teams ... most recently played club soccer for Ohio Galaxies Elite and helped the Greater Toledo Futbol Club to the State Cup finals in 2014 ... also earned two letters in basketball, receiving Honorable Mention All-Conference accolades.