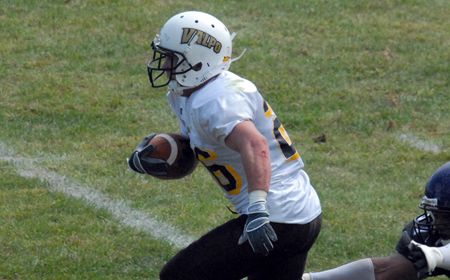 John Popper (Dublin, Ohio/Coffman H.S.) caught the go ahead touchdown pass with 8:38 to play in the game and the Valparaiso defense made a big stop on the final drive of the game as the Crusaders earned their first victory of the season 20-17 over Concordia (Wis.) on Saturday afternoon at Century Stadium in Mequon, Wis.

After Concordia kicked a field goal with just over 11 minutes to play to take a 17-13 lead, Popper returned the ensuing kickoff 50 yards to allow Valpo to start at the Falcons’ 36-yard line.  On fourth down, quarterback Bobby Wysocki (Calumet City, Ill./Thornwood H.S.) scrambled and avoided a sack before running for a first down.  On the next play, Wysocki connected with Popper for a 24-yard touchdown pass.

“Wysocki gave great effort to continue that drive,” head coach Stacy Adams said after the game.  “The touchdown pass afterwards was a great play as well.”

With the lead, the defense stiffened.  Valpo forced back-to-back three-and-outs and took over with 3:13 remaining on the clock.  Concordia used its timeouts and forced the Crusaders to punt, and blocked the kick, taking over on the Crusader 20-yard line with just 2:12 to play.

The Crusaders held, allowing just five yards, and forced the Falcons to try a field goal with 37 seconds to play.  A bad snap on the try and the Falcons scrambled, and tried to find a receiver in the end zone, but the ball was dropped and Valpo held on for the victory.

“The defense made the plays of the game after the blocked punt,” Adams added.  “They fought for all four downs, giving great effort to win the football game.”

Valpo jumped on top midway through the first quarter as Chris Smith (Manistee, Mich./Manistee H.S.) made a 25-yard field goal.  The Falcons responded before the end of the quarter with a four-yard touchdown pass from Thomas Pacchiloi to Eric Rusch.

A Ross Wiemer (Burlington, Wis./Burlington H.S.) touchdown run from two yards out on a fourth-and-goal put Valpo up 10-7 after the first possession of the third quarter.  Concordia again answered with a Pacchiloi touchdown toss, this one from 25 yards out to Montrell Davidson.

Smith’s second field goal of the game, this one from 39 yards out, made it a 14-13 game at halftime and neither team would score in the third quarter, setting the stage for the finish.

Valpo (1-1) has a bye week next Saturday before hosting Carthage on September 26 at Brown Field in the Crusaders home opener.  Kickoff is set for 1 p.m. at Brown Field with all the action carried live on the Valpo Sports Radio Network.