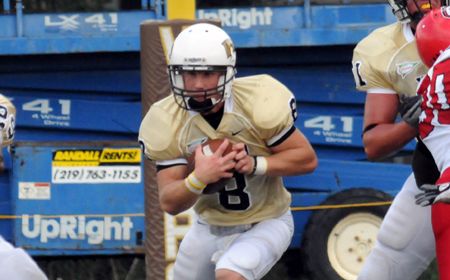 Wysocki carried 14 times for his first collegiate 100-yard rushing game, but completed just 9-of-25 passes for 88 yards through the air.

“San Diego came out to play today,” head coach Stacy Adams said.  “We need to continue to improve our play.  The injury bug has hit us hard and we’ve been down a few starters.”

The game started promising for the Crusaders, holding the Toreros to a three-and-out on their first possession.  Valpo marched down field in 12 plays, reaching the San Diego 18-yardline, but a field goal attempt went wide right to end the threat.

Five plays later, Matt Jelmini ran 22 yards for a touchdown to put the visitors on top.  With 2:06 to play in the opening quarter, Scudellari connected with Kyle Warren from 28 yards out to make it 14-0 Toreros.

A 26-yard interception return by Gabriel Derricks made it 21-0, and San Diego added one more touchdown before halftime.

Joe Martin’s interception return for a score just 57 seconds into the third quarter made it 34-0 San Diego before the Crusaders found the scoreboard.

A 10-play, 74-yard drive, set up by three Wysocki passes moved the ball down to the three, where Morrelli found the end zone for his first career touchdown.

“Bobby showed when given time he can throw the ball,” Adams added.  “Our offensive line is getting better, but we need to focus on our running game.”

The Toreros would add two more touchdowns late in the third quarter to close out the scoring.

Valparaiso (1-4, 0-2) will head to Indianapolis, Ind. for the Battle for the Hoosier Helmet next Saturday when the Crusaders face Butler.  Kickoff is set for 12 p.m. CDT with all the action carried live on the Valpo Sports Radio Network.