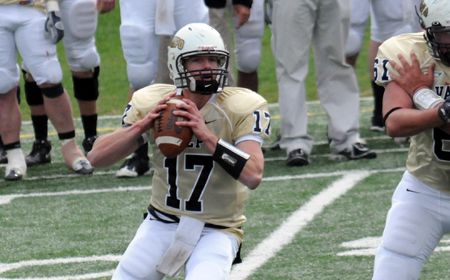 Valparaiso’s Nate Goergen (Golden, Colo./Golden H.S.) threw for a career-high 261 yards and two touchdowns by Jacksonville pulled away from the Crusaders in the second half on the way to a 49-20 victory at D.B. Milne Field on Saturday afternoon in the final road game of the season for the Brown and Gold.

Goergen completed 21-of-35 passes on the afternoon, six of which went to Nicholas Henton (Chicago, Ill./De La Salle H.S.) for 97 yards.  Goergen entered the game having just completed nine passes all season for 108 yards in his first season with the Brown and Gold.

Jacksonville’s offense started quickly, as Rudell Small scampered 57 yards on the second play from scrimmage for a touchdown.  After the Dolphins held Valpo to a three-and-out, a 74-yard pass play set up the hosts again.  Josh Philpart hauled in a 12-yard pass from Josh McGregor just 3:47 into the game to make it 14-0 Dolphins.

“Coming off of our second flight trip in as many weeks, we started off sluggish,” Adams said.  “I’m proud of our guys for fighting back and making it a game though.”

The Crusader defense then held Jacksonville on fourth down and Valpo’s offense went back to work.  A 12-play, 66-yard drive, keyed by a 24 yard pass play to Henton and a roughing the passer call by the Dolphin defense put Valpo back in the red zone.  Nick Jones (Effingham, Ill./Effingham H.S.) scored on a two-yard plunge up the middle with 8:47 to play before halftime.  The point after try was missed though but Valpo was within one, 14-13.

Just before halftime Jacksonville added to the lead as J.J.  Laster scored from three yards out to give the Dolphins a 21-13 lead at the break.

“We left four points on the field in the first half due to our kicking game (missed field goal and PAT),” Adams added.  “We will have to strive to improve in that area next week.”

Jacksonville tallied 305 first half yards to Valpo’s 186, but the Crusaders completed 12-of-20 passes for 130 yards, including four to Henton for 64 yards.

The Dolphins came out of the locker room and held Valpo to a three-and-out on the first possession of the second half.  Jacksonville made it 28-13 on its first drive as McGregor connected with tight end Christopher Kuck from 11 yards out in the middle of the end zone for a touchdown.

McGregor’s third touchdown pass of the day, an 11-yard toss to Rodney Sumter, late in the third quarter increased the Dolphin lead to 22.  Small scored from a yard out with 10:25 to play in the game making it 42-13.

Goergen added his second TD toss of the day with 7:55 to play, finding Sean McCarty (Waukesha, Wis./West H.S.) from 21 yards out in the corner of the end zone for a Valpo touchdown.

Jacksonville added a late score as Keith Dawson ran it in from eight yards out with 59 seconds remaining to close out the scoring.

Anthony Curry (Merrillville, Ind./Merrillville H.S.) led the defense with his first two interceptions of the season, giving the senior 12 for his career.  Both picks came inside the Crusader 10-yard line to end drives.

Curry had two big interceptions at crucial times,” Adams added.  “That’s what you need from your senior captain and defensive plays like that kept us in the ball game.”

Jones finished the game with 17 carries for 55 yards as Valpo totaled 323 yards of offense on the afternoon.  Myers had five receptions for 73 yards and the touchdown.

Small led Jacksonville’s (5-4, 4-2 PFL) rushing game with 151 yards and the two scores on 16 carries while McGregor completed 16-of-24 passes for 305 yards and three touchdowns.  The Dolphins finished the game with 581 yards of total offense.

“We’re still being hit by the injury bug with three more players going down this week,” Adams concluded.

Valparaiso (1-8, 0-6) will begin its final homestand of the regular season next Saturday at Brown Field hosting Campbell.  Kickoff is set for 1 p.m.