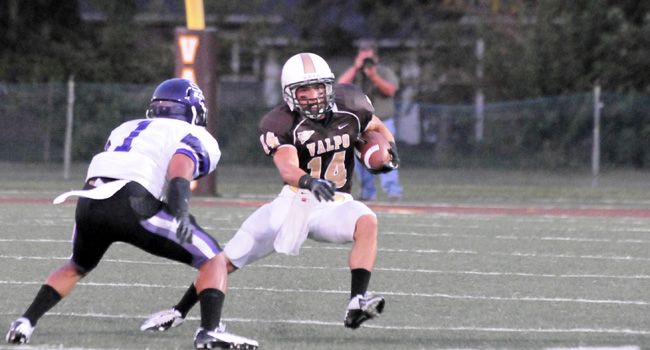 Valparaiso entered the fourth quarter of its season opener at Brown Field on Thursday night with a 34-27 lead, but Saint Joseph's (Ind.) scored twice in the final 15 minutes, including a six-yard touchdown run with 24 seconds to play, to down the Crusaders, 36-34.

The Crusaders entered the fourth quarter with the lead thanks to a pair of scores in the third period to break a 20-20 halftime deadlock. After going three-and-out on their first offensive series, the Valpo defense stripped Puma running back Cameron Crabtree at his own 36. Sophomore Devan Gadson (Orlando, Fla./Freedom) came up with the ball and sprinted into the end zone to give the Crusaders the edge, 26-20 after a missed extra point.

"We made a nice play to strip the ball and run it back for a score there early in the second half," said Crusader head coach Dale Carlson. "We had some momentum going into halftime and while we weren't able to score offensively on our first two possessions, that helped keep the momentum in our favor."

Saint Joseph's responded with a quick strike two possessions later, as a 61-yard touchdown pass from Billy VandeMerkt to Braxton Shelton put the Pumas ahead, 27-26. Valpo answered with a 12-play, 75-yard drive, however, including a big third down conversion on third and six from the Pumas' 33 when redshirt sophomore Eric Hoffman (Manitowoc, Wis./Lincoln) hit redshirt junior Sterling Summerville (Indianapolis, Ind./Park Tudor) for a 15-yard completion.

Later in the drive, Valpo lined up to go for it on fourth and one from the SJC nine-yard line, using a hard count to successfully draw the Pumas offsides for the first down. The very next play, sophomore Gabe Ali-El (Baltimore, Md./Polytechnic Institute) ran in from five yards out as the Crusaders re-claimed the lead, 34-27.

After a three-and-out by the Pumas, Valpo moved the game into the fourth quarter thanks to a 13-play drive which took 5:37, resulting in a punt downed at the SJC 12. The Crusader defense then forced the Pumas to use nearly four minutes in a drive resulting in a 39-yard field goal by Gavin Voss which cut the Valpo edge to 34-30 with 7:14 to go.

Valpo looked in prime position to put more points on the board while running time off the clock, driving the ball to a second and three on the Pumas' 29, but a six-yard loss eventually necessitated a punt, giving St. Joe's possession with 3:01 to go. VandeMerkt went 8-for-10 on the game-deciding drive while also running for a first down, and Crabtree eventually ran it in from six yards out with 24 seconds remaining to make it 36-34 Pumas. Sophomore Andrew Cassara (Mokena, Ill./Aurora Christian) returned the ensuing kickoff to the Valpo 43 to give the Crusaders hope, but a pair of incomplete passes ended the game.

"I think a big key was that we weren't able to run clock on our next-to-last offensive possession," said Carlson. "We had pretty decent field position, and that situation is a drill we've worked on through the spring and camp. We really didn't execute well there, and we also didn't execute defensively on the last touchdown drive."

The teams traded scores in the first half, each time St. Joe's scoring first before the Crusaders knotted the game up. VandeMerkt hit Julian Walker for a 21-yard score on the Pumas' second possession, but an interception by sophomore Dylan Storm (Littleton, Colo./Worcester Academy) in the end zone on SJC's next drive kept it a one-score game. Valpo took advantage, driving 80 yards in 13 plays to score the tying touchdown on an 11-yard scamper by Ali-El.

Sean Martinez ran in from one yard out for the Pumas to cap a 15-play, 82-yard drive which gave St. Joe's a 13-7 lead with 9:51 to go in the second quarter following a missed extra point. Valpo answered with a scoring drive of its own, the big play being a a 43-yard completion from Hoffman to senior Eric Slenk (Holland, Mich./Christian) to move the ball inside the five-yard line, setting up a two-yard TD run by redshirt freshman Jake Hutson (Blanchard, Mich./Montabella). But the Crusaders missed the point after as well, keeping the game tied at 13-all.

Walker scored his second touchdown for St. Joe's when he fumbled into the end zone and recovered following a 43-yard completion, putting the Pumas ahead 20-13 with 4:20 remaining in the first half. But the Crusaders again responded, this time utilizing the running game with eight rushes in a 10-play drive which ended with a score from one yard out by senior Ryan Lehr (Cincinnati, Ohio/Glen Este), to send the game into halftime tied at 20.

VandeMerkt was 21-of-38 passing for Saint Joseph's (1-0) for 303 yards and two touchdowns. Walker caught 11 of the Pumas' passes for 205 yards and a pair of scores, while Shelton paced the running game with 19 carries for 75 yards. The Crusaders were out-gained on the night, 549-350, but committed no turnovers while forcing a pair from the Pumas.

"As I told our players, it's not good enough just to compete," said Carlson. "We definitely played hard and we competed hard, but we just didn't make the plays we needed to throughout the game to win."

Valparaiso (0-1) returns to the gridiron on Saturday, Sept. 8 when the Crusaders travel to Youngstown, Ohio to face Youngstown State. Kickoff is set for 3 p.m. CDT, and all the action can be heard live on the Valpo Sports Radio Network (WAKE, 1500 AM, Valparaiso) and online at www.valpoathletics.com, which will also have a link for live stats.