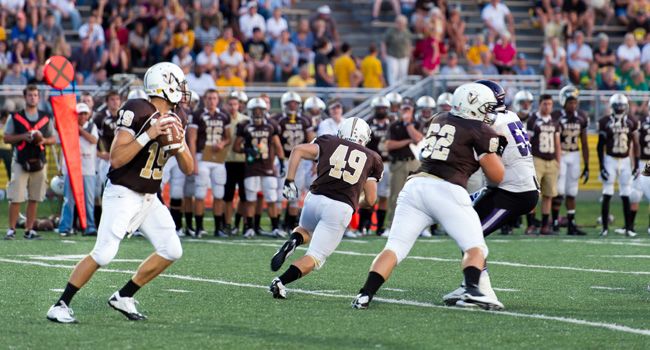 This Week in Crusader Football: The Valparaiso football team continues the 2012 season on Saturday afternoon as the Crusaders travel to Youngstown State to battle a traditional NCAA I-FCS national power. This week’s contest is the second of three straight non-conference games to open the season for the Crusaders prior to the start of Pioneer Football League action.

Previously: Valparaiso entered the fourth quarter of its season opener at Brown Field on Thursday night with a 34-27 lead, but Saint Joseph's (Ind.) scored twice in the final 15 minutes, including a six-yard touchdown run with 24 seconds to play, to down the Crusaders, 36-34. Gabe Ali-El paced the Valpo running attack with 80 yards and a pair of TDs, while Eric Hoffman went 23-of-44 through the air for 221 yards to ten different receivers. Defensively, Alex Grask led the way with 11 tackles.

Next Up: The Crusaders conclude the non-league slate back at Brown Field next Saturday at 1 p.m. as Valpo hosts Duquesne.

On the Air: For the eighth straight season, the Valpo Sports Radio Network will be home to all 11 Crusader football games in 2012. All 11 games can be heard live on WAKE (1500 AM, Valparaiso), online through www.valpoathletics.com or by downloading the WAKE Radio app for Android or iPhone devices. Todd Ickow will handle all the play-by-play, with Travis Lucian adding the color commentary this week. Live video of the game is also available through the Youngstown State website.

Head Coach Dale Carlson: Dale Carlson is 1-22 in his third season with the Crusaders and 111-125-3 overall entering his 24th season as a collegiate head coach. He arrived at Valpo from Ohio Dominican where he began the Ohio Dominican program from scratch in 2004, just as he did at Tri-State University prior to his tenure with the Panthers. He is the 16th head coach in Valpo history, and just the seventh since 1946.

Series Notes: Valpo and Youngstown State have met just once on the gridiron, that meeting coming in Youngstown last season on Sept. 10. The Penguins scored the first 56 points of that game en route to a 77-13 victory. Dale Cook led the way offensively with 39 rushing yards and a 63-yard reception.

Scouting Youngstown State: The Penguins enter Saturday’s game at 1-0 this year after going on the road and winning at D-I FBS Pittsburgh last Saturday,31-17. Following the victory, YSU moved up to #6 nationally in The Sports Network FCS poll, earning seven first-place votes. The Penguins were led against Pitt by MVFC Offensive Player of the Week Andre Stubbs, who ran for 71 yards and a TD while also catching four passes for 61 yards and a touchdown. Defensively, Dale Peterman led the way with nine tackles, while Jeremey Edwards and Twin Fernandez each recovered fumbles.

Running It In: All four of the Crusaders’ offensive touchdowns last Thursday came via the ground, as Gabe Ali-El scored from 11 and 5 yards out, while Jake Hutson ran one in from 2 yards and Ryan Lehr snuck it across from 1 yard out. It was the first time Valpo had a four-touchdown day on rushes since Oct. 11, 2008, when the Crusaders scored four rushing touchdowns in an overtime win over Davidson.

Scoring on Defense: The defense also contributed to the Crusaders’ 34-point effort on Thursday, as Devan Gadson returned a fumble 36 yards for a touchdown near the start of the second half against the Pumas. It marks the second straight game that the Crusaders have scored a touchdown on defense, as Bruce Collins had an interception return for a score in the season finale last year at Davidson. Ironically, it was Collins who forced the fumble that Gadson ran in on Thursday.

Ali-El Leads the Backfield: Sophomore Gabe Ali-El, who led Valpo in rushing as a rookie last season, picked right up where he left off to open the 2012 season. Ali-El set new career highs in the season opener, carrying the ball 14 times for 80 yards. He also scored a pair of touchdowns on the ground after scoring just one rushing touchdown during his freshman season.

Grask on the Tackle: Junior Alex Grask led the Crusader defense against the Pumas last Thursday, posting a career-high 11 tackles, including nine of the solo variety. Grask, who posted one tackle for loss and also had a pass breakup, previously tallied 10 tackles as a freshman at Morehead State.