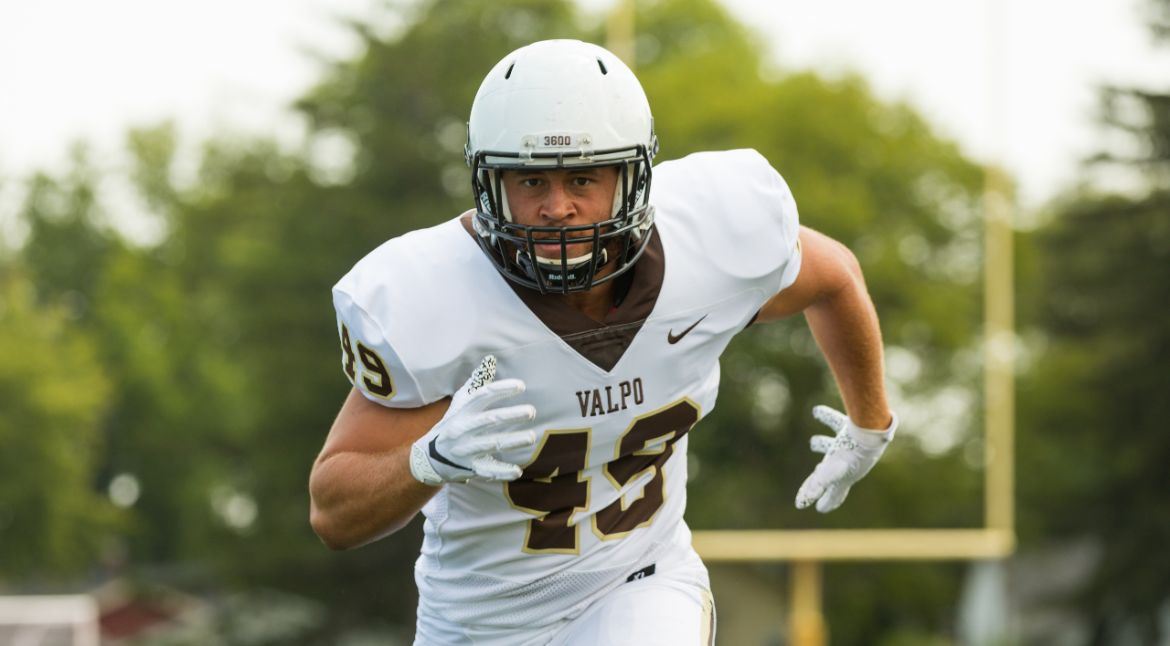 Nick Turner is one of four captains on Valpo's team this season.
Charleston at Valparaiso | September 28, 2019
Related Links
Related Links

This Week in Valpo Football: Homecoming Week has arrived on the campus of Valparaiso University, and at the center of all the festivities is Saturday’s football game against the University of Charleston. Every game is important, but the homecoming game represents something bigger. Numerous alumni, family and friends will be looking on as the numbers of two of the program’s all-time greats will be retired. It’s also the final tune-up prior to Pioneer Football League action.

Previously: Valpo will look to bounce back from a 38-7 setback last week at Truman State, the alma mater of legendary Valpo basketball coach Gene Bartow. The Bulldogs, a team receiving votes in the NCAA Division-II national poll, limited Valpo to two first downs in the opening half and forced punts on Valpo’s first seven possessions. The team’s lone score of the game came on a 16-yard pitch-and-catch from Jimmy Seewald to Trey Stablein with 6:51 to go in the fourth quarter. Four players took snaps at quarterback for Valpo in the game – Chris Duncan, Joe Mullen, Jimmy Seewald (season debut) and Ben Nimz (collegiate debut).

Centennial Season: In addition to marking the start of a new head coaching tenure, 2019 is a significant season for Valpo football as the program is set to celebrate its 100-year history over the course of the campaign. Valpo Athletics is set to recognize individuals and teams from select eras at four games this season. The program has won 11 conference championships, including six in the Indiana Collegiate Conference and two in the Pioneer Football League. It’s also the 50th anniversary of the 1969 team that won an ICC crown, an anniversary that will be celebrated at this week’s Homecoming game. In addition, Valpo will retire the numbers of two University legends on Saturday at Brown Field. Garry Puetz ’73 and Fuzzy Thurston ’56 (posthumous) will become the first players in program history to have their numbers retired. The use of No. 80 will be discontinued in honor of Thurston, while No. 71 will be retired for Puetz. Both were All-Americans in college and went on to win Super Bowl rings in the NFL – Puetz with Washington in 1982 and Thurston with the Green Bay Packers in the first two Super Bowls, his fifth and sixth NFL Championships.

Era in the Spotlight: The 1950-1975 seasons will be in the spotlight this week as Valpo continues to recognize a different era of its 100-year history at each home game this season. During a time period that was rich with success, Valpo won six Indiana Collegiate Conference championships. Valpo appeared in the Cigar Bowl in 1950, then the championship run started with the program’s first season of ICC affiliation in 1951, when an Emory G. Bauer coached crew went a perfect 9-0 to earn the conference title. Bauer’s Valpo team repeated as champions in 1952 before winning again in 1954. Valpo added to the successful period in Valpo lore with ICC championships in 1964, 1968 and 1969. Bauer and Walt Reiner shared head coaching duties in 1964 before Norm Amundsen guided the team for the final two championships of the 1960s. The 2019 season marks the 50th anniversary of the 1969 team that went 7-2 overall and 3-1 in the ICC.

Following Valpo Football: All home games this season will be streamed on ESPN+, which is available on a subscription basis for $4.99 per month. Todd Ickow and Dave Huseman will have the call on Saturday. In addition, Garrett Willis, Ben Ariano and Danny Dalenberg will provide the radio description on 95.1 FM Valparaiso, also available via the TuneIn Radio app. Links to live video, audio and stats will be available on ValpoAthletics.com.

Homecoming History: Valpo dropped a high-scoring affair to Davidson 40-35 in last season’s Homecoming game, which doubled as the PFL opener. Prior to that, the team had put together a 4-1 record on Homecoming Saturday over the previous five seasons, defeating Campbell in overtime in 2013, Missouri Baptist in 2014, Davidson in 2016 and Stetson in 2017. Valpo will attempt to improve to 5-2 over its last seven Homecoming contests on Saturday.

Series Notes: This will mark the first meeting between these two teams.

Scouting University of Charleston: The Golden Eagles (NCAA Division II) were picked to finish fourth of 11 in the Mountain East Conference preseason poll. They started the season by upending a No. 25 (NCAA D-II) Fairmont State team that was picked to finish as the league runner-up by a score of 42-39. Charleston narrowly held on to a lead that was 35-3 at halftime. The MEC was formed in 2012 with UC serving as one of 12 charter members after previously holding West Virginia Intercollegiate Athletic Conference (WVIAC) affiliation. Charleston lost its second game 28-20 at Urbana in Week 2. This past Saturday, the team hosted West Virginia Wesleyan and prevailed 34-29. Golden Eagles head coach Pat Kirkland is in his ninth season and guided the program to its best record in 2015 at 10-2. That was the team’s highest win total since football returned to the institution in 2003 after a hiatus that began in 1956. Tyreik McAllister is the team’s leading rusher with 25 carries for 121 yards, while Mike Strachan has 30 catches for 483 yards and has hauled in five touchdowns. Quarterback Brant Grisel is 62-of-106 passing for 1045 yards and has nine TDs against just one interception.

Quite the Quarter: Trey Stablein entered the fourth quarter of the Sept. 21 game at Truman State without a catch in his collegiate career. The redshirt sophomore made six grabs during that period, including a 16-yard TD reception for Valpo’s lone score of the day. Stablein led the team in receptions with his six for 62 yards. He was named the Indiana National Guard Player of the Game by Valpo Athletics following the contest.

Seewald on the Valpo Charts: Redshirt junior Jimmy Seewald made his season debut in the second half of Valpo’s game at Truman State on Sept. 21. He tossed his 35th career touchdown pass while throwing for 76 yards to boost his career total to 4,567, which ranks fifth in program history in career passing yards.

Benjamin’s Boot: Valpo punter Benjamin Niesner followed his 56-yard punt on Sept. 14 vs. Central Connecticut State with a quality performance on Sept. 21 at Truman State. The Portland State transfer totaled 404 yards over 10 punts, averaging 40.4 yards per punt in the game against the Bulldogs. He became the 17th player in the FCS nation with 10 punts in a game this year. He finished two shy of the PFL record and three shy of Rob Rayl’s school record, which came on Oct. 10, 1992 against Ferris State. Niesner had the busiest day by a Valpo punter since Josh Young also had 10 chances on Oct. 26, 2013 at Drake.

Block Party: Valpo blocked two punts on Sept. 14 vs. Central Connecticut, with Jamari Booker and Laddie Skarecky both notching blocks. This marks the first time Valpo has blocked two kicks in an entire season (let alone a single game) since 2015. The only other FCS teams to own two blocked kicks in a game at that point in the season were Northern Arizona (vs. Western New Mexico), Texas Southern (vs. Prairie View), The Citadel (at Georgia Tech) and Delaware State (at Delaware).

Booker’s Big Day: Jamari Booker led the team with eight tackles on Sept. 14 vs. Central Connecticut in a performance that was highlighted by a blocked punt and 30-yard return for a touchdown. It was the second score of his career and first since a pick six against Morehead State on Oct. 28, 2017. Booker also forced a fumble in the game, the fourth time in his career he has done so.

Cartales Corralling Catches: Running back Kyle Cartales had a career-high eight receptions to lead the team on Sept. 14 vs. Central Connecticut, tying for the most catches in a single game by a Valpo player since the start of the 2016 campaign. He joined Frank Catrine (Oct. 8, 2016 vs. Drake) and Griffin Norberg (Sept. 22, 2018 vs. Truman State) as the only Valpo players with eight-catch performances since the beginning of the 2016 season.

Airing It Out: Valpo quarterback Chris Duncan completed 24 passes on Sept. 14 vs. Central Connecticut, marking a career high. His previous watermark was 21 on Oct. 27 of last season against Drake. The 47 pass attempts also marked the most in a game in his career. Duncan had the most pass completions by any Valpo player in a single game since Jimmy Seewald’s 26 on Sept. 9, 2017 vs. Duquesne. The 47 pass attempts were the most by a Valpo player in a game since Scott Staal’s 49 in the 2015 season finale at Jacksonville.