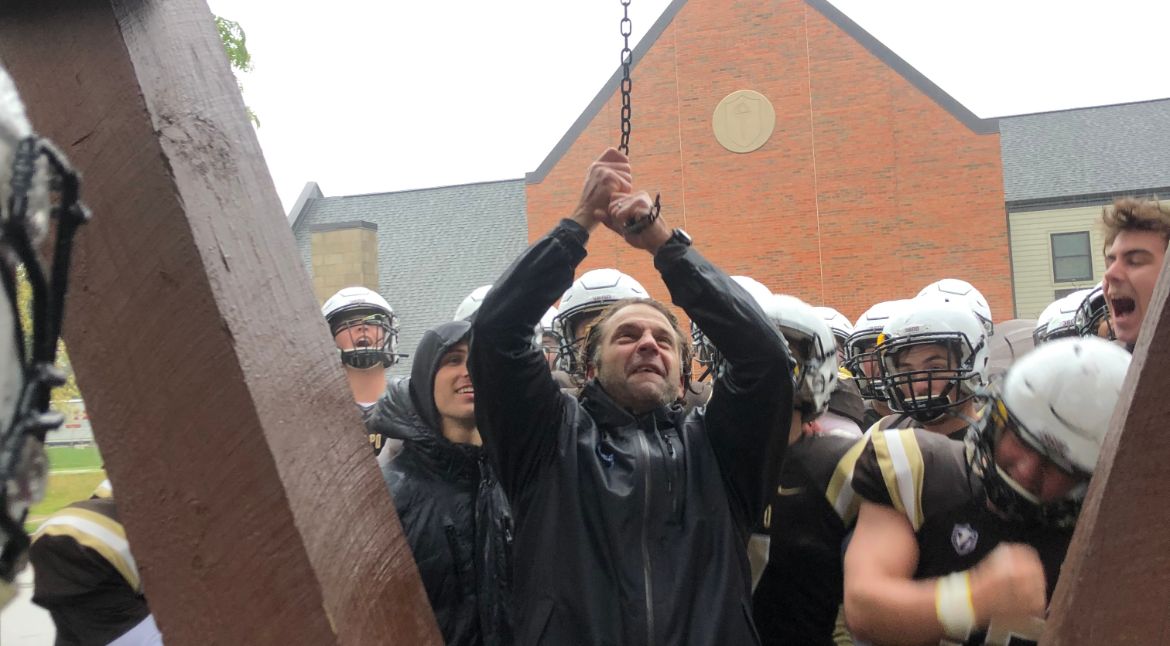 Given Landon Fox’s background as a defensive coach, it seems only fitting that his first win as the head coach of the Valparaiso University football team came courtesy of a glowing defensive effort.

The 19-10 victory over Stetson at a rainy and wet Brown Field on Saturday started and ended with the defense, but this victory was about more than just that. It was about the moment of joy for players and coaches alike when the sound of the Victory Bell cut the air, marking the culmination of the team’s steady improvement in recent weeks.

“This is huge,” fifth-year senior running back Elias Earley (Land O’Lakes, Fla. / Carrollwood Day) said. “We’re as proud of Coach Fox as he is of us. It’s easy to slack off in your intensity when things aren’t going well, but it’s been the same from Day 1. Our staff has put in so much time and so many hours for us. In the weight room, it’s been great to see what Coach Curtis has accomplished. I’m just happy for that staff. This is a team win, from the athletic trainers to the strength & conditioning coach to the scout team, this is a team win.”

“I’d like to start by congratulating our players on the victory. The one thing we were talking about in the locker room after the game is that our approach has been the same each and every week. That hasn’t changed, and that’s a credit to our football team. We’ve grown a lot. We showed our poise after that touchdown run on their first play from scrimmage. There was no panic on our sideline. We made adjustments, and I credit our players for that. We’re being persistent in our approach, and that’s a credit to these guys and their approach throughout the year. I’m excited about them getting their first win.”

“I told the guys in the locker room, our goal is to win football games. That’s what we want to do and what we’re going to do. The preparation and how we go about it is the key. We’re going to go back on Monday and watch the film and we’ll look at it just like we did any other week. We’ll look at what we need to do to get better. It’s all about the players, and I’m excited for them.”

“Elias (Earley) and I have talked a lot, and the thing that stands out to me is his persistence. Our expectation as a staff is that we want players to give us their very best each and every day. If you do that, we’ll give you opportunities. That’s what he was able to do, and when his opportunity came, he took advantage of it. He’s really grown as a leader. I appreciate what he’s meant to our team not only as a player, but as a person.”

“Stetson’s running backs are very good football players. After the big play to start the game, we called everyone together and said, ‘we need to do this, this and this,’ and if we do those things, we’re going to be fine. That’s what we did. It appeared we were very consistent in our assignments throughout the game.”

“I give credit to Coach Dunn, who works with our field-goal block. We’ve been close to blocking one the last few weeks, and we got it done today. There are a multiple ways we’re growing as a team. We’re doing the little things like getting skinny in the gap. Nobody has seen those things, but now we’re seeing it pay off. These guys are locked in and engaged in our meetings and our ability to get skinny and get in the gap proved to be the difference on one of the key plays of the game.”

Valpo (1-7, 1-3 PFL) will return to the road to battle Davidson in Davidson, N.C. for a noon CT kickoff next Saturday. The game will be broadcast on Davidson All-Access and as always on 95.1 FM Valparaiso WVUR. Links to live video, audio and stats will be available on ValpoAthletics.com.