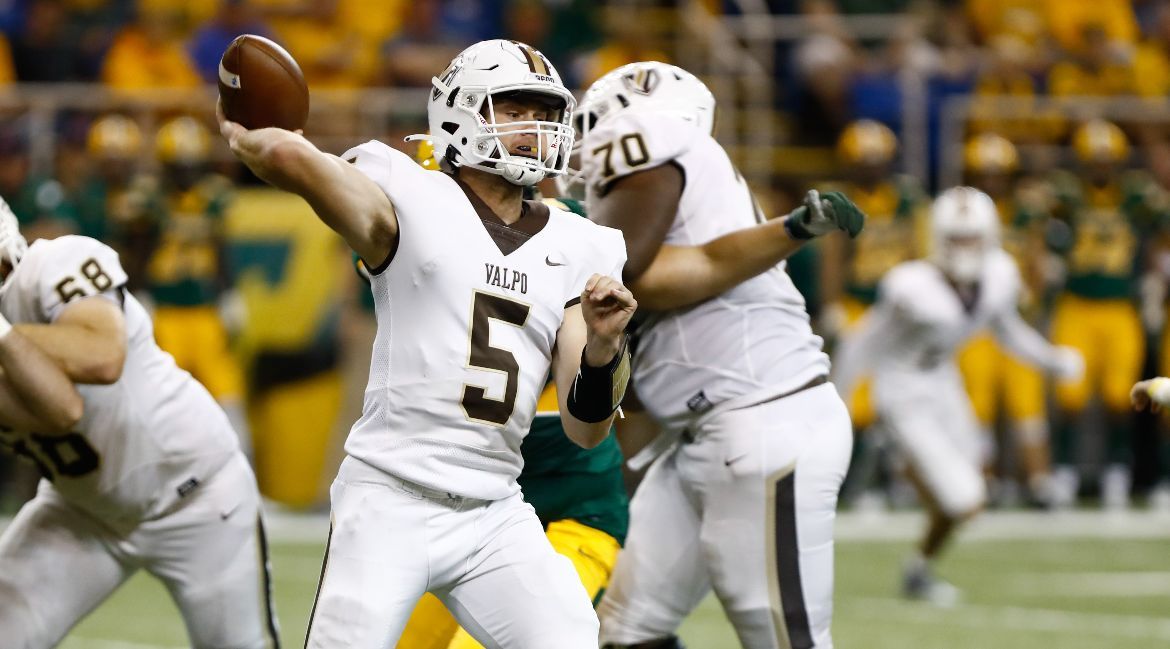 Pioneer Football League action got off to a majestic start for the Valparaiso University football team on Saturday afternoon at Drake University in Des Moines, Iowa.

On fourth-and-10 from the Drake 30 with 1:05 remaining in the fourth quarter and Valpo down 21-17, Jordan Bingham (Indianapolis, Ind. / North Central) made a juggling, unlikely catch in the end zone to give the Beacons a 24-21 lead that would stand as the game’s final score. The Bingham heroic play marked the second desperation pass completed by redshirt junior quarterback Ben Nimz (Waukesha, Wis. / Catholic Memorial) on the game’s final drive as moments earlier he connected on a 42-yard heave to Ollie Reese (Franklin, Tenn. / Battle Ground) on 4th-and-17 from the Valpo 28.

Drake attempted a 42-yard field goal with three seconds on the clock in an effort to send the game to overtime, but Austin Martins (Newman, Calif. / Orestimba [Modesto JC]) blocked the try to ignite a celebratory scene on the Valpo sideline.

“It feels amazing to win at Drake twice in a row after the program had never won here before. I told the players after the game that this win says something about our team. This game has been circled on Drake’s calendar since we played in the spring, so we had to match that intensity. In the bigger picture in terms of this year, we’re just 1-0 in the league. We like the way that sounds, but we’ve got a long way to go, and it starts with Game 2 against Marist next week.”

“On the first long catch, I had a pretty good idea that Ollie Reese had a chance. Ben threw it up there, and Ollie played it well in the air and I knew he had a really good opportunity. I didn’t feel quite as strongly about the Bingham one when it was in the air, but he was able to tip it up to himself and make a great play. Those few plays helped us overcome some mistakes that we have to get cleaned up in a hurry.”

“Ben was well prepared when his number was called. That scenario is his strength because he has a very good arm and the ability to push the ball down the field. He gave our guys a chance, and that was the key. The throw to Contreras that was knocked away was a really nice ball as well. I give him credit, and you feel good for guys like that who are sitting there waiting and then take advantage of the opportunity.”

“We were solid on defense for the most part. The guys were prepared and knew what was coming. We weren’t perfect, but we were able to hold them to 21 points despite five extra possessions from turnovers. Our defense did a nice job.”

“I’m not sure if there’s ever been a team to win despite being minus five in turnover margin. You typically can’t do that, but to our credit we continued to play hard and remained persistent in what we’re trying to do and we were able to come up with some plays to win at the end of the game.”

Valpo (1-3, 1-0) will attempt to improve to 2-0 in PFL play next Saturday, Oct. 2 as Marist comes to town for a Homecoming matchup that kicks off at noon at Brown Field. Ticket information can be found at valpoathletics.com/tickets, and those who cannot attend can watch on ESPN3.