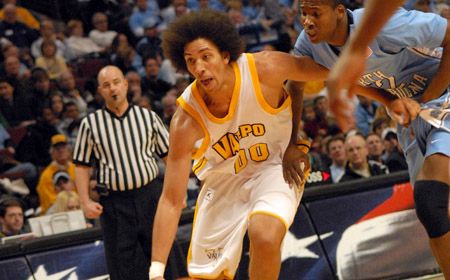 The Matchup: Valparaiso continues Horizon League play tonight with its third nationally televised game of the year and its fourth contest against a ranked team, as the Crusaders travel to Indianapolis to take on #13/13 Butler on ESPNU.

Series History: Valpo’s most-common opponent all-time, Butler holds a 63-32 advantage in the series over the Crusaders.  The Bulldogs have also won the last six meetings between the two schools, including most recently a 75-62 decision at the ARC on Jan. 3.  The two squads were tied at 31 at the break, thanks in large part to a 19-3 run sparked by Valpo’s second unit, but Butler came out of the break on a 19-4 run to take control.  Senior guard Brandon McPherson led the Crusaders with an inspired effort off the bench, going for 22 points in just 23 minutes of action.  Senior forward Urule Igbavboa added 17 points on 6-of-8 shooting and also grabbed seven rebounds.

Last Time Out: Valparaiso put together its best offensive performance against a Division I opponent this season Saturday night at the Athletics-Recreation Center, but Green Bay’s Ryan Tillema had a career-best 36 points to lead the Phoenix to an 83-76 victory over the Crusaders.  The Crusaders connected on 13 3-pointers Saturday evening, by far a season high, led by a career-best six off the hands of sophomore Howard Little, who ended the night with a career-high 28 points.  But Tillema scored 25 of his 36 in the first half to stake the Phoenix to a nine-point halftime lead, and Valpo would get no closer than five in the second half.  Jake Diebler came up with 17 points, canning five 3-pointers for the second consecutive contest, while playing all 40 minutes for the third straight game.  Urule Igbavboa added 15 points, four assists and three blocked shots.

Following the Crusaders:  Today’s game can be heard live on the Valpo Sports Radio Network, a four-station entity carrying Crusader athletics all over Northwest Indiana.  Originiating from WVUR, 95.1 FM in Valparaiso, the VSRN also includes WEFM, 95.9 FM, Michigan City and WAKE, 1500 AM, Valparaiso.  Veteran broadcaster Todd Ickow returns for his 18th season on play-by-play for the Crusaders, while WVUR’s David Schroeder will handle the color commentary.  Live audio will also be available online at www.valpoathletics.com, which will also have a link for live stats.  The game will be broadcast nationwide on ESPNU as well, with Jim Barbar and Jim Chones on the call.

Offense Awakens: The Crusader offense broke out in a big way Saturday against Green Bay.  Valpo, which had not scored more than 68 points in regulation against a D-1 team all season, went for 76 points versus the Phoenix, thanks in large part to knocking down a season-high 13 3-pointers.  The Crusaders also posted their second-best FG percentage against a D1 opponent all season (48.3%), and also set a season-high with 22 second-chance points on 15 offensive rebounds.

Lucky Number 13?: Valpo hopes a repeat of the success it had last time it faced the nation’s 13th-ranked team is in store for Friday.  The Crusaders last faced #13 on Friday, March 13, 1998 as the 13 seed in the first round of the NCAA Tournament.  The nationally-ranked opponent that day was Ole Miss, which Valpo defeated famously on Bryce Drew’s game-winning 3-pointer, sparking its Sweet 16 run.

Getting Healthy: Looking down his bench last weekend, Crusader head coach Homer Drew had a veritable smorgasbord of options to choose from as compared to the previous weekend.  Senior forward Urule Igbavboa and freshman guard Erik Buggs both made their return to the lineup Thursday against Milwaukee, giving Valpo eight dressed scholarship players for the first time since Wright State on Jan. 10.  The Crusaders played with just seven scholarship players Jan. 15 at UIC and had just six Jan. 17 at Loyola.

A Rare Drama: Saturday’s game against Green Bay afforded Crusader fans the rare opportunity this year to see a game decided by single digits.  Last year, 21 of the Crusaders’ 36 contests were decided by single digits, but so far this year, only three of their 21 games have been nine-point spreads or less.  Valpo had not played a single-digit game prior to Saturday since its 75-70 overtime loss to La Salle in the Virgin Islands.

National Audience Awaits Valpo: After appearing on national television seven times during the 2007-08 campaign, Valparaiso is making its third national TV appearance of this season on Friday evening.  Previously on ESPNU on Dec. 20, Valpo was featured in a showdown with top-ranked North Carolina.  The Crusaders’ contest at Purdue Dec. 28 was broadcast on the Big Ten Network.

Little Big League: Sophomore guard Howard Little had a career night on Saturday against Green Bay.  Little poured in 23 points in the second half alone and ended up with a career-best 28 for the game, the highest output by a Crusader this year.  He also chipped in seven rebounds, three assists and three steals without committing a turnover.  Little, who has reached double figures in scoring in each of the last four games, currently ranks second among Crusader regulars in both scoring (9.2 ppg) and rebounding (5.1 rpg) and is second in the league in 3-point percentage (.407).

120 and Counting...: Senior guard Jake Diebler, who has started 88 straight games for the Crusaders, has not come off the floor in Valpo’s last three games.  The two games last week were the two most productive offensive outputs of Diebler’s career, as he put up a career-best 19 in the win over Milwaukee Thursday and scored another 17 Saturday against Green Bay.  The senior, who knocked down five 3-pointers in both contests, currently leads the league in 3-point percentage in league-only games (.522) and is third overall in the category (.396).

Igbavboa Returns: After missing the Crusaders’ game at Loyola Jan. 17 due to injury, senior forward Urule Igbavboa returned to the lineup last week and continued his consistent output.  Igbavboa put up eight points and nine rebounds off the bench Thursday in the win over Milwaukee and chipped in 15 points, four rebounds and three blocks Saturday against Green Bay.  Igbavboa, who leads Valpo in both scoring (11.2 ppg) and rebounds (5.2 rpg), is just 41 points shy of Valpo’s all-time top-20 in scoring and just seven boards away from the top-10 in rebounding.