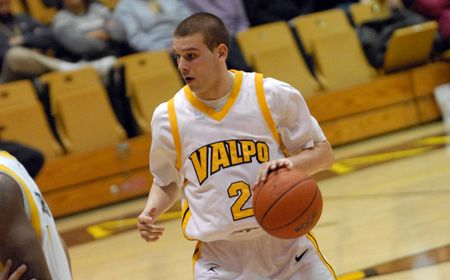 The Matchup: Valparaiso continues its final multi-game road trip of the 2008-2009 campaign on Thursday, as the Crusaders travel to Dayton, Ohio to face off against Wright State.

Series History: The Crusaders took all three matchups between the two teams a year ago in Valpo’s first season in the league, including a 71-66 win in Dayton, but Wright State captured a 64-48 victory at the ARC on January 10 to take a 6-5 edge in the all-time series.  Sophomore guard Michael Rogers put up a double-double with 12 points and a game-high 15 rebounds, while De’Andre Haskins joined Rogers in double figures in the scoring column with ten points off the bench.  Todd Brown led Wright State with 19 points, while John David Gardner added 18 for the Raiders.

Last Time Out: A tenacious Valparaiso squad earned its first lead of the game with just over six minutes to play, and following 11 straight Butler points fought back to within two with 90 seconds remaining, but the 13th-ranked Bulldogs hit enough free throws down the stretch to hold off the Crusaders’ upset bid Friday evening, 59-51.  Urule Igbavboa paced the Crusaders with 15 points, eight rebounds, and season-high totals of five assists and four blocks.  Logan Jones came off the bench for the first double-digit scoring effort of his career, scoring ten points, including 5-of-6 from the charity stripe.  The freshman also handed out a pair of assists without committing a turnover while running the point in his 22 minutes of action.  Butler, which won its record-tying 21st straight Horizon League contest, was led by 18 points from Gordon Hayward.  Veasley added 13 points, while Howard scored nine points and grabbed a game-high 11 rebounds.

Following the Crusaders:  Today’s game can be heard live on the Valpo Sports Radio Network, a three-station entity carrying Crusader athletics all over Northwest Indiana.  Originiating from WVUR, 95.1 FM in Valparaiso, the VSRN also includes WEFM, 95.9 FM, Michigan City; and WAKE, 1500 AM, Valparaiso.  Veteran broadcaster Todd Ickow returns for his 18th season on play-by-play for the Crusaders, while WVUR’s David Schroeder will handle the color commentary.  Live audio will also be available online at www.valpoathletics.com, which will also have links for live stats and video through the Horizon League Network.

Showing Improvement: Valparaiso has concluded its season series against two opponents already this year and has shown improvement in the scoring margin against both after making strides in the scoring margin against just three of nine league opponents last season.  The Crusaders have already improved by 26 points against Milwaukee from the first to the second meeting, and also improved by five points against Butler between the two games against the nationally-ranked Bulldogs.

Facing a Tough Slate: The Crusaders have taken on one of the toughest schedules in the country as measured by a pair of rating systems.  The Sagarin ratings, as published in USA Today, rank Valpo’s schedule as the nation’s 11th-toughest to date and the hardest among all mid-major schools.  Ken Pomeroy’s ratings, as published at kenpom.com, come to a similar conclusion, ranking the Crusader slate 14th to date, including ten games against teams ranked in the top-100.

Back to the Dramatics: Valpo’s last two league games (losses vs. Green Bay and at Butler) both were decided by single digits, a rare sight this year for Crusader fans.  Prior to the Green Bay contest, this year’s Valpo team had only had two games decided by nine points or fewer, and both such affairs (San Diego, La Salle) occurred within a four-day span in the Virgin Islands.  This lack of close contests comes off the heels of last season, when  21 of the Crusaders’ 36 matchups were decided by single digits.

Sweep in the Cards Again?: Horizon League road play is notoriously difficult, but this two-game swing to Wright State and Detroit has nothing but fond memories for the Crusaders.  Valpo opened its first season of league play last year with this trip and ended it 2-0, winning at WSU 71-66 and at Detroit 81-68.

Drew Nears Milestone: Crusader head coach Homer Drew is now just one win shy of 600 for his career after Valpo’s victory over Milwaukee Jan. 22.  Drew would become just the 33rd Division I head coach to reach the 600-win milestone.

National Audience Watches Valpo: After appearing on national television seven times during the 2007-08 campaign, Valparaiso has made three national TV appearances this year.  Valpo was featured in a showdown with top-ranked North Carolina on ESPNU on Dec. 20.  The Crusaders’ contest at Purdue Dec. 28 was broadcast on the Big Ten Network, while their game last Friday evening at Butler was shown live on ESPNU as well.

Igbavboa Leads Across the Board: Senior forward Urule Igbavboa paced the Crusaders last Friday at #13/13 Butler in points (15), rebounds (8), assists (5) and blocked shots (4), setting career highs in the latter two categories.  He became the first Valpo player in over a decade to lead the Crusaders outright in all four categories in the same game.  The team leader in scoring (11.4 ppg) and rebounding (5.3 rpg), Igbavboa moved into tenth on Valpo’s all-time rebounding chart last game and now has 642 career caroms.  He is also just 26 points shy of the all-time top-20 in scoring.

160 and Counting...: Senior guard Jake Diebler, who has started 89 straight games for the Crusaders, has not come off the floor in Valpo’s last four games.  Diebler has had two of the most productive offensive games of his career during that stretch, as he put up a career-best 19 in the win over Milwaukee and scored another 17 against Green Bay.  The senior, who knocked down five 3-pointers in both contests, currently leads the league in 3-point percentage in league-only games (.521) and is fourth overall in the category (.398).

Jones Steps Up: Freshman Logan Jones had the best offensive performance of his young career at #13/13 Butler last time out.  Jones hit just two field goals, including his only 3-point attempt, but canned 5-of-6 free throws to finish with ten points, making him the tenth Crusader to reach double figures in scoring this year.  He also handed out a pair of assists and did not turn the ball over while running the point for most of his 22 minutes of playing time.