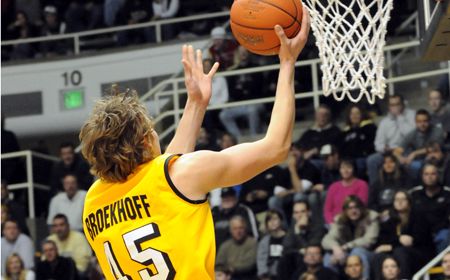 Valparaiso used a 16-0 run over the final 4 minutes of the first half to erase a 15-point deficit and then went back-and-forth with Ohio in a second half in which neither team could gain more than a four-point lead, but the Crusaders' last-second attempt at the tying basket came up just short as the Bobcats captured a 78-75 victory over Valpo Tuesday evening in Athens, Ohio.

The Crusaders actually had a shot to take the lead with 13 seconds to play, trailing by two, but the three-point shot by Brandon Wood (Kokomo, Ind./Kokomo [Highland C.C./Southern Illinois]) came up short and went out of bounds off a Crusader, forcing Valpo to foul the Bobcats' D.J. Cooper with 12 seconds remaining.  Cooper hit both to give Ohio a four-point lead, but Wood, in mid-air, found Cory Johnson (Duluth, Minn./Duluth East [Iowa State]) at the top of the key for a turnaround 3-pointer to cut the deficit to 76-75.

With 4.5 seconds left on the clock, the Bobcats got the ball in to Cooper, who managed to erase two seconds before taking the foul.  Cooper again hit both freebies, but Valpo still had a shot at the tying basket with 2.5 seconds remaining.  The Crusaders ran a full-court inbound play that got the ball to Wood cutting across at midcourt in mid-stride, and the junior got two dribbles off before a good look from the right side fell short to end the game.

“I'm so proud of our team,” said Crusader head coach Homer Drew.  “We were down double digits late in the first half, and then just really caught fire to get the halftime lead and competed hard in the second half.  I'm really pleased with the way we fought despite the fact we were undersized and undermanned inside.  We had chances late, but you have to credit Ohio, they made the shots that they needed to tonight.”

Ryan Broekhoff (Frankston, Victoria, Australia/Australian Institute of Sport) led the Crusaders Tuesday with a career-best 24 points, hitting 9-of-13 from the floor, including 3-of-4 from behind the arc, and also pulled down a team-best seven rebounds.  Johnson added 19 points, while Wood scored 16 to go along with six rebounds and seven assists.

“Ryan played one of his best all-around games for Valpo tonight,” said Drew.  “He shot the ball well, but I also was pleased with the fact he had seven rebounds.  He really did a great job fighting in the post defensively and on the boards despite giving up size.”

The Crusaders found themselves down big early in the first half, hitting just 6-of-26 from the floor in the first 16+ minutes as Valpo headed into the under-four media timeout trailing Ohio, 31-16.  Out of the stoppage, Broekhoff hit the offensive glass, putting back a miss by Hrvoje Vucic (Split, Croatia/Faust Vrancic), and then the sophomore converted on the back end of the fast break after a rebound and pass ahead by Wood to cut the lead to 31-20.

A steal by Howard Little (Chicago, Ill./Stoneridge [Calif.] School) led to another fast-break chance, this one finished on a three-point play by Wood to bring the deficit into single digits with 1:53 to play in the opening half.  On Valpo's next possession, Wood canned a triple, and then on the defensive end grabbed a rebound and started a fast break which Brokehoff ended with a layup.

Following an Ohio timeout, Wood came up with a steal and Broekhoff followed Wood's fast-break miss with a tip-in to make it a one-point game.  The Bobcats missed the front end of a 1-and-1, giving Valpo the ball for the final shot of the first half, and the Crusaders made the most of it, running the clock all the way down before running a perfectly-executed lob play to Johnson for a layup to gain an improbable 32-31 halftime lead.

The second half was about as tightly contested as a 20-minute span could be, as Ohio never led by more than four points while the Crusaders never gained more than a three-point edge, as the lead changed hands a total of 13 times in the second half.  The Bobcats utilized a 17-of-22 effort from the foul line in the second half to help put points on the board, while Valpo canned six trifectas in the second stanza.

The Crusaders matched their largest lead of the game, going ahead 66-63 with 5:09 to play on a Broekhoff triple, but Ohio got a putback basket from Reggie Keely and then a jumper in the paint by Cooper to take the lead, 67-66 with 4:07 remaining.  Little drove in for a layup on Valpo's next possession to re-claim the lead for the Crusaders, but another second chance for the Bobcats led to Asown Sayle's third 3-pointer of the game to give Ohio the 70-68 edge.

Valpo answered immediately, as Johnson found Wood for a driving layup with 2:16 remaining to tie the contest at 70 apiece.  The Bobcats' Tommy Freeman connected on his third 3-pointer on Ohio's next trip, though, as the Bobcats led 73-70 with 1:53 to play.  After the teams traded turnovers, Broekhoff hit two clutch free throws to bring Valpo back within one point, but after forcing an Ohio miss, the Crusaders were called for an offensive foul and then Ohio's Ivo Baltic split two free throws to set up the closing sequence.

“The two 3-pointers that Sayles and Freeman hit were just big shots for Ohio,” said Drew.  “It kept them in the lead and didn't give us a chance to get the lead back and have the ball.  And then Cooper hitting those free throws down the stretch was key as well.  We were just hoping they would miss a free throw or two to give us the chance to take the lead, and it didn't happen.”

The Crusaders placed just the three players in double figures as they connected on just 41.2% (28-of-68) from the floor and 29.6% (8-of-27) from 3-point range to Ohio's 49.0% and 38.1%, respectively.  Little and Michael Rogers (Kingston, Jamaica/Redemption [N.Y.] Christian) each also pulled down six boards for the Crusaders, while the former also came up with a game-high three steals.

Ohio (3-1) placed six players in double figures in a balanced effort, led by 14 points off the bench from DeVaughn Washington.  Cooper added 13 points and also dished out a game-high 10 assists for a double-double.  The Bobcats also ended the game with a 40-32 rebounding edge over the Crusaders, led by nine rebounds from Baltic.

Tuesday's game was the second of four that Valparaiso (2-2) will play as part of the Las Vegas Invitational.  The Crusaders now head to Vegas for the latter two games in the multi-team event, starting with a Friday 4 p.m. CST matchup against Northern Colorado from the Orleans Arena.  All the action can be heard live on the Valpo Sports Radio Network (WAKE, 1500 AM, Valparaiso; WEFM, 95.9 FM, Michigan City; WJOB, 1230 AM, Hammond) and online at www.valpoathletics.com, which will also have a link for live stats.