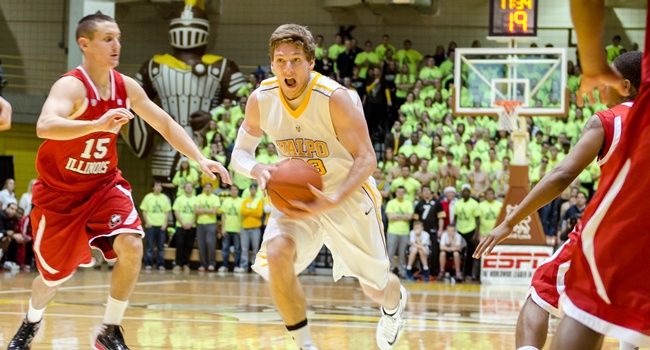 The Valparaiso men’s basketball team shot just better than 32 percent from the field Sunday afternoon in losing its second game of the season, falling 62-49 on the road against the Saint Louis Billikens at Chaifetz Arena in St. Louis, Mo. The loss snapped Valpo’s three-game winning streak.

“Saint Louis is one of the better defensive teams in the country,” head coach Bryce Drew said of the Billikens, who were playing just a day removed from the passing of their head coach, Rick Majerus.  “We knew tonight, with all the emotions from the last 24 hours, that they would come out and give us their best.”

Ryan Broekhoff (Frankston, Victoria, Australia/Australian Institute of Sport), Kevin Van Wijk (Hoofddorp, Netherlands/Katholieke Scholengemeenschap Hoofddorp) and Matt Kenney (Mooresville, Ind./Mooresville) each scored 10 points for the Crusaders, who were held below 50 total points for just the second time this season.  The Crusaders struggled from behind the arc, hitting just 5-of-21 three-pointers after entering play hitting more than 40 percent of their 3-pointers on the season

The Crusaders jumped out to an early 5-0 lead just more than a minute into the game following a Van Wijk deuce and a triple from Broekhoff.  Saint Louis received a three-pointer from Cody Ellis to send the two teams into the first media timeout tied 7-7.  Neither team led by more than three points over the subsequent six minutes and it remained tied 15-15 with 10:08 to play in the opening half.

Saint Louis began to assert control from that point on, unfurling a 10-0 run that was capped off by a Dwayne Evans dunk.  The Crusaders were outscored 16-5 in the final eight minutes of the half and trailed 31-24.  Valpo hit just eight field goals in the stanza.

The Crusaders cut away at the deficit to begin the second half.  Jordair Jett scored the opening basket for Saint Louis, but Ben Boggs (Roanoke, Va./Hidden Valley [Virginia Tech]) replied with a trey and Van Wijk drilled a pair of free throws to pull Valpo to within 33-29 with 17:26 left in the game.  The Billikens responded with a 12-2 spurt to push the margin to double digits at 45-31 with 12:19 remaining.  The Saint Louis advantage would swell to as much as 16 in the second half.

Trailing 49-33, the Crusaders pieced together a 12-4 run to close to within eight points at 53-45 with 3:32 to play. Kenney fueled the uprising, knocking down a pair of three-pointers during the stretch.

“In the second half, I thought we got a group together that competed well,” Drew said. “They were able to control the boards and gave us a chance to cut into the lead.”

The Crusaders grabbed 10 offensive rebounds in the game, including three from Fernandez who had five total boards.  Broekhoff snatched seven caroms to go along with his 10 points. Erik Buggs (Memphis, Tenn./Mitchell) scored five points and added four assists.

Saint Louis shot 55.6 percent from the field and saw three players reach double figures, led by Evans who scored 17. Jett contributed 14 on 5-of-7 shooting, while Mike McCall Jr. chimed in with 10 points.  The Billikens were efficient from long range – hitting 4-of-9 from deep – and effective inside, outscoring the Crusaders 30-18 in the paint.

Valparaiso (5-2) returns home to battle IPFW on Wednesday from the Athletics-Recreation Center.  Tipoff is slated for 7:05 p.m. The game can be seen live on the Horizon League Network and heard live on the Valpo Sports Radio Network.  Links for the live audio and video, as well as live stats, will be available at valpoathletics.com.