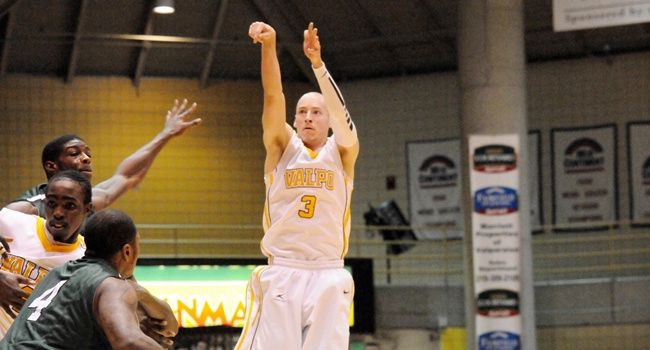 In front of a national television audience Friday night on ESPNU, the Valparaiso men’s basketball team led start to finish in a 74-50 victory over Cleveland State at the Athletics-Recreation Center.

“We knew coming in that Cleveland State liked to play with a lot of defensive pressure, and I thought our guys responded well to that pressure tonight,” said Crusader head coach Bryce Drew.  “We moved the ball much better today than we did on Wednesday, and did a much better job at getting the ball to our shooters for open looks.  I’m really happy with the effort and the energy we came out with tonight.”

The Crusaders roared out to a 12-1 lead right out of the gate within the game’s first five minutes, forcing a Viking timeout before the first media break.  Valpo scored on six of its first eight possessions, with four of the five starters scoring during the run.  Seniors Kevin Van Wijk (Hoofddorp, Netherlands/Katholieke Scholengemeenschap Hoofddorp) and Matt Kenney (Mooresville, Ind./Mooresville) each had four points during the opening spurt, which fifth-year senior Will Bogan (Boise, Idaho/Vallivue [Ole Miss]) capped with a driving layup on the fast break just 4:54 into the game.

Valpo would go scoreless over the next five minutes, however, allowing Cleveland State to score nine straight points to move back within one possession.  The Vikings would later cut the deficit to just 15-14 on a fast-break basket by Junior Lomomba with 7:32 remaining in the opening period, but the Crusaders put the game away with a 20-4 run into the halftime break.

Junior Jordan Coleman (North Hollywood, Calif./Calabasas [Southwestern Ill. College/Hawai’i]) started the run immediately with a triple following Lomomba’s bucket, and following a two-minute scoreless stretch both ways, Bogan got inside for a layup and Kenney hit a 3-pointer on consecutive possessions, pushing the lead to nine points.  The advantage was 23-16 with under three minutes to play in the half before Valpo reeled off a stretch of five straight possessions with points.

The big push started innocuously enough, as fifth-year senior Erik Buggs (Memphis, Tenn./Mitchell) split a pair from the foul line.  Next time down, Bogan found a cutting Buggs, who one-timed a bounce pass into the hands of redshirt junior Bobby Capobianco (Loveland, Ohio/Loveland [Indiana]) for a layup.  Bogan connected on a 3-pointer on two of Valpo’s next three trips, sandwiching an old-fashioned 3-point play by senior Ryan Broekhoff (Frankston, Victoria, Australia/Australian Institute of Sport), to cap a stretch of 12 straight points in under two minutes.  The Crusaders would eventually take a 35-18 lead into the halftime break.

Valpo was never threatened in the final 20 minutes, as the advantage never fell below the 17-point halftime lead.  Most of the half was spent with a lead of at least 20 points for the Crusaders, who went up by 25 with 13:34 to play on a 3-pointer by junior LaVonte Dority (Chicago, Ill./Foreman [USF]), their largest edge until the final minute.

Kenney led three Crusaders in double figures with 14 points, while Bogan, re-inserted into the starting lineup in the absence of Ben Boggs (Roanoke, Va./Hidden Valley [Virginia Tech]), answered with 13 points on 5-of-6 shooting, including 3-of-4 from downtown.  Broekhoff added a quiet 10 points and also grabbed a game-high 12 rebounds for his third double-double of the year.

It was a balanced scoring effort for the Crusaders, as eight of nine players scored at least five points.  Coleman and Dority each ended the night with nine points, the former also grabbing a career-best eight rebounds.  Valpo shot nearly identical percentages from the floor in each half, ending the night 26-of-56 (46.4%) from the field, and were 5-of-13 (38.5%) from downtown in both halves.

Luda Ndaye led Cleveland State (8-7, 0-1 Horizon) with 15 points off the bench, while Bryn Forbes added 12 points.  The Crusaders limited the Vikings to just 30% (15-of-50) shooting, including just 1-of-18 from 3-point range, while the CSU starters combined for just 15 points.  Buggs came up with four steals on the defensive end to lead all players and tie his career high.

Valparaiso (11-5, 1-1 Horizon) kicks off a stretch of three straight road games Wednesday evening at 7 p.m. at UIC.  As always, the game can be heard live on the Valpo Sports Radio Network and seen on the Horizon League Network.  Links to live audio, video and stats will be available at ValpoAthletics.com.