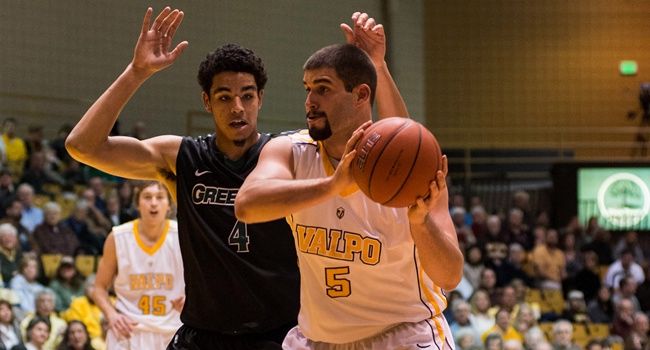 Valparaiso put together its best defensive performance against a Division I school in nearly 30 years in earning its largest Horizon League win since joining the league on Friday evening, downing Milwaukee by a 71-40 score in front of 4,000-plus at the ARC.

The 40 points surrendered by the Crusaders were the fewest against a Division I opponent since Valpo gave up just 33 points in a win over Green Bay on Jan. 21, 1984.  It’s most recent defensive effort of this magnitude came against Grinnell on Dec. 9, 1987, a 68-40 Valpo victory.  Meanwhile, the 31-point margin of victory was the Crusaders’ largest within league play since they were a Mid-Con member and defeated Oakland 95-64 on Jan. 2, 2006.

“I think our guys came in mentally prepared today, and it showed,” said Crusader head coach Bryce Drew.  “We put up some of our best numbers all year and shot the ball much better tonight.  Credit goes to the seniors for coming out focused and ready to play and to the rest of the team for following their focus.”

It was a tight game early on, with senior Ben Boggs (Roanoke, Va./Hidden Valley [Virginia Tech]) providing the early offense, scoring 10 points in the opening six minutes as the Crusaders maintained a narrow lead.  A pair of Milwaukee free throws cut the Valpo edge to 12-10 with 12:12 to play in the first half, but the Crusaders went on a 10-1 spurt over the next four minutes, featuring 3-pointers by fifth-year senior Will Bogan (Boise, Idaho/Vallivue [Ole Miss]) and junior LaVonte Dority (Chicago, Ill./Foreman [USF]) and an old-fashioned 3-point play from senior Ryan Broekhoff (Frankston, Victoria, Australia/Australian Institute of Sport), to claim a double-digit lead 11:35 into the game.

The lead was seven at 25-18 as the clock ticked under the six-minute mark of the first half, but the Crusaders closed the half on a 12-3 run to go into the locker room ahead 37-21.  A triple from Broekhoff started the half-ending run, while fifth-year senior Erik Buggs (Memphis, Tenn./Mitchell) also hit a 3-pointer during the spurt.  Boggs and Dority each added fast-break layups, and a tip-in by redshirt junior Bobby Capobianco (Loveland, Ohio/Loveland [Indiana]) in the final seconds capped the run, giving the Crusaders the 16-point edge into the break.

Valpo left no doubt as to the outcome out of halftime, scoring the first 11 points of the second half to push its lead to 27.  Senior Kevin Van Wijk (Hoofddorp, Netherlands/Katholieke Scholengemeenschap Hoofddorp) scored five points during the run, including a circus layup which he released while he was nearly horizontal to the floor.  Buggs added a steal and fast-break dunk, while Broekhoff capped the run with another 3-pointer.  The lead never fell below 25 points the rest of the way, reaching its zenith at 36 twice, once with 6:17 remaining on Bogan’s fourth 3-pointer of the game and then with 5:21 to play on a monster two-handed dunk by sophomore Vashil Fernandez (Kingston, Jamaica/Princeton Day [Md.] Academy).

The offensive effort was balanced for the Crusaders on Friday, as all eight Valpo players who scored tallied at least five points.  Bogan and Boggs tied for team-high honors with 12 points, while Broekhoff added 11.  Dority scored nine, Capobianco eight and Fernandez six off the bench, while Van Wijk tallied five in just 13 minutes of action.  Capobianco also pulled down a game-high nine rebounds, while Broekhoff added seven caroms.

Dority paced the Crusaders with five assists, one of seven players to record multiple assists as Valpo totaled 19 helpers on 27 made field goals.  The Crusaders shot 56.3% (27-of-48) from the floor and 52.4% (11-of-21) from behind the 3-point line, the fourth time this year Valpo has shot better than 50% from downtown.

Valparaiso (17-6, 7-2 Horizon) returns to action on Tuesday evening from the ARC as the Crusaders host UIC at 7:05 p.m.  As always, the game can be heard live on the Valpo Sports Radio Network and seen online on the Horizon League Network. Links for the live audio and video, as well as live stats, will be available at ValpoAthletics.com, while ValpoGameday.com will be your one-stop shop for live video, stats and interactive chat on the same page.