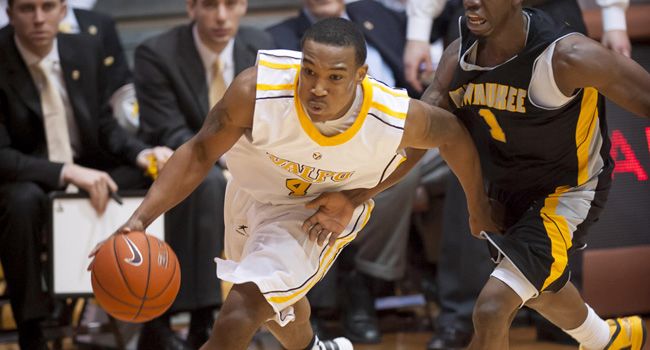 The Valparaiso men’s basketball team led Loyola by 15 points at the halftime Tuesday night in Chicago, Ill., and after the Ramblers had rallied to tie the game in the second half, the Crusaders scored on 11 straight possessions as Valpo downed Loyola by a final score of 85-76.  With the win, the Crusaders clinch at least the third seed and a first-round bye in the Horizon League Championship.

Valpo controlled the Ramblers in the opening 20 minutes, carrying a 42-27 advantage into halftime.  The Crusaders shot 62.1% (18-of-29) from the field in the first half, including five 3-pointers, and held Loyola to just 35.7% (10-of-28) shooting in the opening period.  Back-to-back early 3-pointers by senior Ryan Broekhoff (Frankston, Victoria, Australia/Australian Institute of Sport) and fifth-year senior Will Bogan (Boise, Idaho/Vallivue [Ole Miss]) kicked off a 14-3 spurt that gave the Crusaders an 18-7 edge just over nine minutes into the game.

The lead never fell below seven points the remainder of the first half, and after a Jeff White 3-pointer with 6:53 remaining brought the Ramblers within 29-21, Valpo held Loyola scoreless for nearly a five-minute span.  During that time, four different Crusaders combined for nine points, capped by a triple from senior Ben Boggs (Roanoke, Va./Hidden Valley [Virginia Tech]), to pull ahead 38-21.  The Ramblers scored six of the next eight points to move within 13, but Boggs would drive past his man for a layup on the final possession of the opening half to give the Crusaders the 42-27 lead at the break.

Loyola would post a 19-4 run over the first 8:39 of the second half to tie the game at 49-all, making it a brand new ballgame.  Over that stretch, the Crusaders went just 1-of-10 from the floor, a Bogan 3-pointer, and committed four turnovers, while the Ramblers hit 7-of-11 over the same span, capped by a Christian Thomas layup to tie the game.

Senior Kevin Van Wijk (Hoofddorp, Netherlands/Katholieke Scholengemeenschap Hoofddorp) responded once the Ramblers tied the score with a 3-point play, but Thomas answered with an old-fashioned 3-point play of his own.  Valpo again went inside to Van Wijk for a layup to make it 51-49, but a dunk from Nick Osborne tied the game at 51-apiece.

That would be the game’s final tie, however, as the Crusaders continued producing on the offensive end.  Junior LaVonte Dority (Chicago, Ill./Foreman [USF]) broke the tie with a 3-pointer off a feed from senior Matt Kenney (Mooresville, Ind./Mooresville), and following a mid-range jumper from Loyola’s Jordan Hicks, Kenney came down and connected on a 3-pointer of his own to make it 57-53 with 8:51 to play.

After Loyola split a pair of free throws, fifth-year senior Erik Buggs (Memphis, Tenn./Mitchell) out-leapt everybody to secure an offensive rebound while being fouled, calmly knocking down a pair from the free throw line out of the under-eight media timeout to push the lead to five points.  Bogan blocked a 3-point attempt on the defensive end, and Kenney came down to knock down another triple to make it 62-54 with 7:08 remaining.  The Ramblers moved back within five on an old-fashioned 3-point play on their next possession, but Valpo answered with a 3-pointer from Buggs to push it back to an eight-point game.

Buggs found redshirt junior Bobby Capobianco (Loveland, Ohio/Loveland [Indiana]) inside for a layup after Loyola missed a pair from the foul line, and then Bogan came up with a steal before connecting on a long baseline jumper, giving the Crusaders a 69-57 lead with 5:23 to play.  A pair of free throws from Kenney and another  mid-range jumper by Bogan capped the run of 11 straight possessions with scores, as Valpo’s lead would not fall under eight points the rest of the way.

All eight Crusaders who played on Tuesday scored at least six points, paced by a season-high 16 points from Bogan, who hit three 3-pointers while also tallying four rebounds and three steals.  Broekhoff and Kenney tallied 14 points apiece, the former tying for team-high honors with six rebounds and the latter handing out five assists.  Van Wijk added 11 points and six rebounds as well.

Valpo ended the game hitting 54.7% (29-of-53) from the floor, including 10-of-20 from beyond the 3-point line, as the 85 points marked the most given up by Loyola this season.  The Crusaders shared the ball as well, tallying 17 assists on their 29 made field goals.

Loyola (14-13, 4-10 Horizon) placed four players in double figures, led by 15 from Thomas, all of which came in the second half.  Hicks scored 13 points, while White and Devon Turk added 12 points apiece.

Valparaiso (21-7, 11-3 Horizon) steps out of league play for the final time in the regular season on Saturday afternoon, when the Crusaders host Eastern Kentucky at the ARC at noon as part of the Ramada BracketBusters event.  The game will be broadcast live on ESPNU, with Jim Barbar and Brooke Weisbrod on the call.  As always, the game can also be heard on the Valpo Sports Radio Network, with links for live audio, video and stats available through ValpoAthletics.com.  ValpoGameday.com will also be hosting a live interactive chat during the game as well.