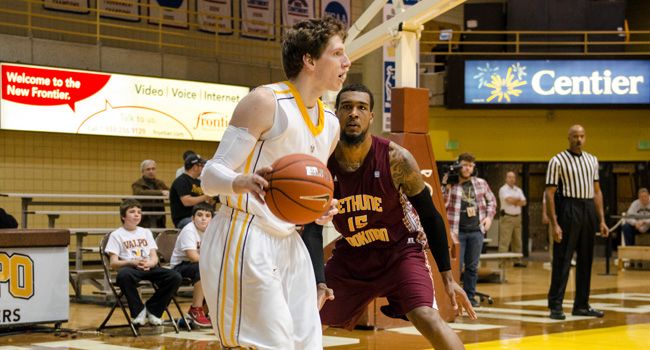 The Valparaiso men’s basketball team left no doubt as how many squads could claim the Horizon League regular season title, winning the outright championship with a dominant performance in a 75-56 victory at Green Bay Saturday afternoon.

Individually, there were multiple milestones set as well.  Senior Matt Kenney (Mooresville, Ind./Mooresville) posted a new season high with 21 points, going 7-of-7 from the floor.  Six of Kenney’s seven makes came from behind the 3-point line, making him just the third player in Crusader history to go 6-of-6 from 3-point range in a game, matching the record for most 3-pointers in a single game without a miss.  Previously, Jared Nuness went 6-of-6 from deep against Belmont in December of 1997, and current senior Ryan Broekhoff (Frankston, Victoria, Australia/Australian Institute of Sport) duplicated the feat at home against Detroit last February.

Meanwhile, senior Kevin Van Wijk (Hoofddorp, Netherlands/Katholieke Scholengemeenschap Hoofddorp) had himself a pair of major accomplishments on Saturday.  His second basket of the second half, coming at the 18:03 mark off a feed from Kenney, were his seventh and eighth points of the game and 1,000th and 1,001st points of his career, making Van Wijk just the 32nd player in Crusader history to reach the millennium mark.  Then, despite shooting just 2-of-5 from the floor Saturday, Van Wijk finished 73-of-105 (69.5%) from the field in Horizon League play, setting a new league record for field goal percentage in league-only action.  Van Wijk broke the mark of 68.6%, set by Detroit’s Ryvon Covile in the 2003-04 season.

It was a slow start for both teams on Saturday, as the Crusaders led just 11-10 11 minutes into the game.  Valpo pushed its lead to four points thanks in part to a triple from junior LaVonte Dority (Chicago, Ill./Foreman [USF]), but back-to-back baskets by the Phoenix tied it up at 16-all with five minutes left in the half.  After a Kenney 3-pointer was answered by an inside basket from Jordan Fouse, the Crusaders went on a big run to end the first half.

The run started on a third-chance basket from redshirt junior Bobby Capobianco (Loveland, Ohio/Loveland [Indiana]), who then grabbed a rebound on the defensive end while being fouled and converted both ends of a one-and-one to make it 23-18.  After a pair of free throws by Green Bay’s Keifer Sykes, Van Wijk drew a foul and made both free throws to push the lead back to five points.  Capobianco then had a pair of baskets in the final 70 seconds of the half, the second coming on a 15-foot baseline jumper, to cap a 10-2 Valpo run to end the period as the Crusaders led 29-20 into the locker room.

The second half was an offensive showcase both ways, as both sides shot at least 70% from the floor over the final 20 minutes.  Valpo would force four Green Bay turnovers over the first five minutes of the second half, though, to help extend its lead early.  Sykes knocked down a jumper on the Phoenix’s first possession to draw Green Bay within seven, but that was as close as it would get, as Valpo went on a 15-5 spurt over the next five minutes to take control.

Kenney started the run with a 3-pointer, followed by the aforementioned consecutive layups from Van Wijk which put him over the 1,000-point mark.  Later in the spurt, fifth-year senior Will Bogan (Boise, Idaho/Vallivue [Ole Miss]) knocked down his first triple of the game around a pair of Capobianco layups, the second of which put Valpo ahead 44-27 with 14:38 to play.

Green Bay would close back to within 12 points once more, as a mid-range jumper from Alec Brown made it 46-34 Crusaders with 10:30 to play, but Valpo hit nine consecutive field goal attempts over the next seven-plus minutes to put the game out of reach.  Kenney got inside for a layup and hit the final three of his six triples in the stretch, while Buggs converted a pair of driving layups.  Capobianco and Bogan both contributed buckets as well and senior Ryan Broekhoff (Frankston, Victoria, Australia/Australian Institute of Sport) connected on his lone 3-pointer of the game, as Valpo out-scored the Phoenix 22-12 over the stretch en route to the easy win.

Kenney’s season-high 21 points also were a game-high total, while Capobianco scored a career-best 16 points on 7-of-8 shooting from the floor while also adding seven rebounds.  Buggs added eight points on 4-of-5 shooting to go with seven assists against just one turnover as well, while Van Wijk (eight points) and Broekhoff (seven points) were both held to single digits for the first time since playing at Ohio State on Nov. 25, 2011.  Valpo shot 60.4% (29-of-48) for the game, including 76% (19-of-25) in the second half, and was 10-of-18 (55.6%) from the 3-point line for the game.

Brown (15 points) and Sykes (14 points) were the only players to finish in double figures for Green Bay (16-14, 10-6 Horizon), as both shot 5-of-12 from the floor to get their respective totals.  The Crusaders held the Phoenix to just 28.6% (8-of-28) shooting in the first half and out-scored Green Bay by 10 points in the final 20 minutes despite Green Bay shooting 70% (14-of-20) in the second half.  Valpo forced 11 Phoenix turnovers in the second half, converting the miscues into 16 points.

Valparaiso (24-7, 13-3 Horizon) will be idle until next Saturday, when it hosts the second semifinal of the Horizon League Championship at 7:30 p.m. from the ARC, live on ESPNU.  Tickets are now available for the quarterfinals (Friday) and semifinals (Saturday) of the league tournament by visiting http://www.valpoathletics.com/tickets/.  The full bracket and matchups will be released Saturday night by the Horizon League.