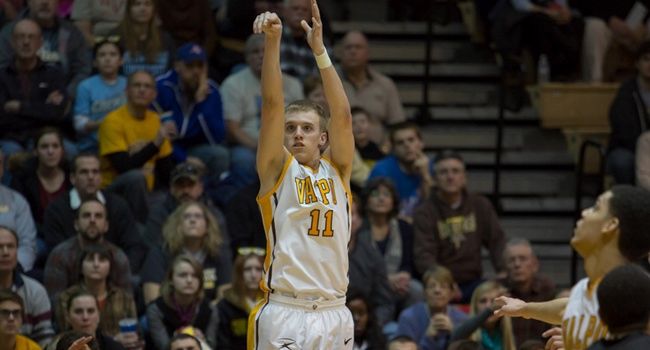 In another riveting chapter in the classic Valparaiso-Oakland men’s basketball rivalry, this time it was the Crusaders who came out on top, as freshman Clay Yeo (Bourbon, Ind./Triton) canned a 3-pointer from the right-hand corner with 7.4 seconds to play to give Valpo a 63-60 victory in a key Horizon League battle at the ARC Sunday afternoon.  For the second time in eight days, the Crusaders’ program record for individual blocks in a single game was matched, this time as Moussa Gueye (Thies, Senegal/SEED Academy [Alabama/Lake Land (Ill.) College]) rejected seven shots.

Yeo, who had played just three minutes over Valpo’s last three games, stepped up to the task on Sunday, playing 25 minutes off the bench for the Crusaders.  Defensively, the freshman was tasked with slowing down the NCAA career 3-point record holder in Travis Bader and did a stellar job, as Bader hit just one of his four 3-pointers with Yeo in the game.  Offensively, Yeo canned three 3-pointers leading up to his game-winner as well.

The leadup to Yeo’s game-winner rivaled the way the Crusaders’ games against the Grizzlies have gone through the years, as both squads traded the lead in the final minutes.  Bader knocked down a 3-pointer with four minutes to play to give Oakland its first lead since early in the first half, but fifth-year senior Bobby Capobianco (Loveland, Ohio/Loveland [Indiana]) came back and grabbed an offensive rebound while being fouled, hitting both free throws to tie the game at 55 with 3:41 to go.

Oakland responded with a layup from Kahlil Felder, but again the Crusaders took advantage of a second opportunity, as junior Vashil Fernandez (Kingston, Jamaica/Princeton Day [Md.] Academy) corralled the rebound and was fouled.  Fernandez stepped up to the line and hit both, making it 57-all with 3:03 to go.  Then, Valpo got a stop and Capobianco made a play on the offensive end, using the jump-stop to perfection to go up for a layup while being fouled.  The senior finished off the 3-point play with the free throw as the Crusaders took a 60-57 lead with 2:25 to go.

Both squads had empty possessions on each of their next two trips, but Bader hit a 3-pointer for the Grizzlies off a handoff over the outstretched arms of Fernandez, tying the game at 60-60 with 40.2 seconds to play.  The Crusaders ran down the shot clock on the offensive end before senior Lavonte Dority (Chicago, Ill./Foreman [USF]) looked to drive to the basket.  On the drive, Yeo’s man helped off just enough to give Dority a lane to deliver the pass to the freshman, and Yeo canned the triple from the right-hand corner with 7.4 seconds to go for the final margin.  Oakland ran the ball up for one last shot, but Dante Williams’ 3-point attempt before the horn was off the mark.

Valpo led for the vast majority of the first half, but put together a key run late in the stanza to gain separation.  Already up 20-15, the Crusaders scored 13 of the next 17 points over a stretch of four and a half minutes to push the lead into double figures.  Gueye had a trio of baskets during the run as part of a nine-point first half, while Dority also scored a pair of baskets at the rim during the spurt.  The Crusaders eventually carried a 33-23 lead into the locker room at halftime.

The lead remained in double figures for Valpo for the first five-plus minutes of the second half, but Oakland scored eight straight points to cut the lead to Crusader edge to 40-36 with 13 minutes to play.  Valpo rallied with seven straight on a Yeo triple, a jumper on the break by freshman Alec Peters (Washington, Ill./Washington) and a pair of Dority free throws to push the lead back to 47-36 at the 11:49 mark.  The Grizzlies had another rally in them, however, as they out-scored Valpo 19-6 over the next eight minutes, capped by Bader’s 3-pointer which gave them the lead.

Yeo finished with 12 points, one of four Crusaders in double figures.  Peters had a team-best 13 points, while Dority added 11 points and five assists and Capobianco finished with ten points and nine rebounds.  Gueye’s record-tying seven blocks came in just 14 minutes of action, while Yeo also blocked a pair of shots as well.

Oakland (9-17, 4-7 Horizon) received 14 points each from Bader and Corey Petros, while Felder chipped in 12 points, five rebounds and five assists in the losing effort.

Valparaiso (15-11, 7-4 Horizon) has nearly a week off before its next game, as the Crusaders hit the road to take on Milwaukee next Saturday evening at 7 p.m.  As always, all the action can be seen live on the Horizon League Network and heard live on the Valpo Sports Radio Network, with links for the live audio and video, as well as live stats, available through ValpoAthletics.com.