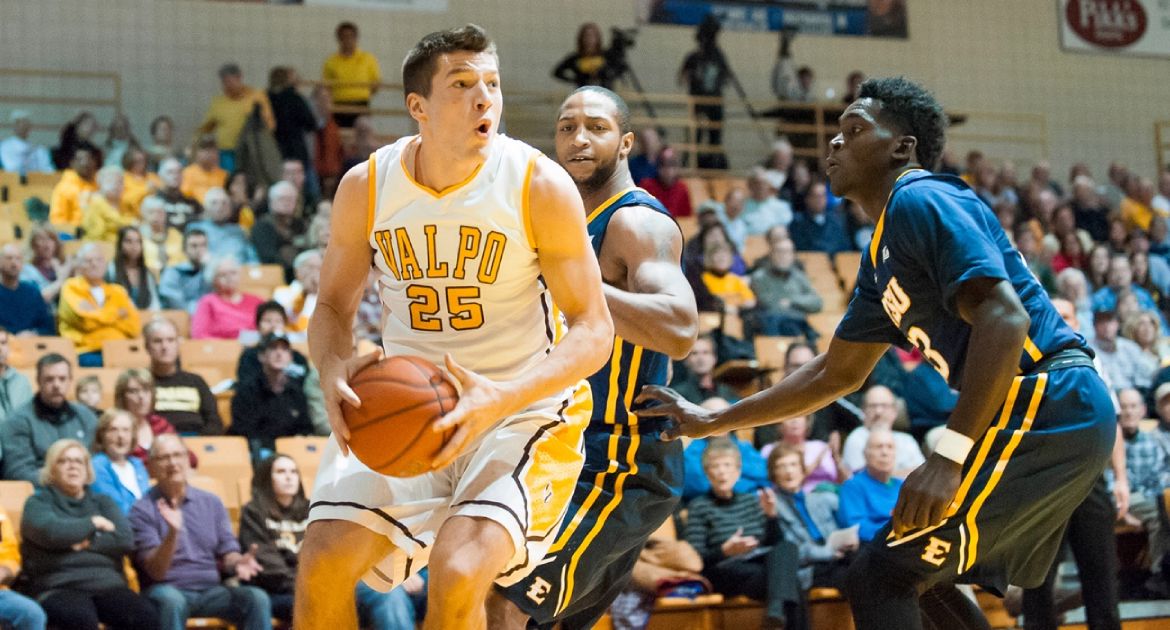 After going scoreless in the first half, sophomore Alec Peters (Washington, Ill./Washington) exploded for 23 second-half points, leading Valparaiso as it rallied from a nine-point halftime deficit for a 75-72 win at IPFW on Saturday night to improve to 11-2 on the year

Peters attempted just one first-half shot – an attempt which came right before the halftime buzzer – as he was plagued by foul trouble, playing just nine minutes and picking up three fouls.  But the sophomore flipped the script in the second half, going 8-of-13 from the field, including a 4-of-7 effort from the 3-point line, and 3-of-4 from the foul line.  Peters’ 23 points in the second period were the most points by a Crusader over the final 20 minutes since Brandon Wood dropped 23 second-half points on Detroit in the 2011 Horizon League Championship.

Peters had plenty of help on Saturday from junior Keith Carter (Maywood, Ill./Proviso East [Saint Louis]), who continued his strong play this season.  Carter finished with 18 points on 7-of-11 shooting, draining all four of his 3-point attempts.  The junior also maintained his spot among the league leaders in assists, tying for team-high honors with four helpers, and matched his career best with four steals as well.  Senior Vashil Fernandez (Kingston, Jamaica/Princeton Day [Md.] Academy) stood out on the defensive end, tying his season high and coming up just one short of a career high as he blocked six shots.

Trailing 42-33 at the half, the Crusaders went immediately inside to Peters to start the second half, as he scored seven seconds into the period.  The next two possessions saw made 3-pointers from Carter and freshman Tevonn Walker (Montreal, Quebec/Vanier College) as Valpo continued to close the gap.  Two trips later, Peters connected on a 3-pointer, followed by a Carter alley-oop to Fernandez for a two-handed slam to cap a quick 13-3 run and give the Crusaders a 46-45 lead with 16:33 to play.

But both at that point, and then a couple minutes later when a short jumper from Peters gave Valpo another one-point edge, IPFW responded with a spurt of its own to regain the lead.  Following the latter basket, the Mastodons scored six straight points to go ahead 55-50 with 12:18 remaining.  Over the next six minutes, the lead wouldn’t vary much at all, as every time the Crusaders cut it to a one-possession game, the Mastodons responded with points of their own.

A pair of Brent Calhoun free throws with 6:28 to play made it 62-57 IPFW, but Valpo would finally make a run stick to take the lead and hold on to it.  Walker hit Peters for a 3-pointer with 6:15 remaining to cut the deficit to two points, and following an IPFW turnover, the duo teamed up again just eight seconds into the ensuing possession as Peters connected on a triple to give Valpo the 63-62 lead.

On the defensive end, Fernandez registered his sixth block of the night to instigate a fast break, one which Carter finished on a putback of his own miss to make it a three-point edge.  IPFW’s Max Landis connected on a second-chance 3-pointer on the Mastodons’ next trip to tie the game at 65-all, but two possessions later, Carter hit a step-back triple to return the lead to the Crusaders.  Another dunk from Fernandez and another 3-pointer by Peters made it a six-point lead at 73-67 with 2:24 to play.

IPFW would score the next five points, however, as a fast-break 3-point play by Isaiah McCray cut the lead to 73-72 with less than a minute remaining.  The Mastodons had a shot for the lead after a Crusader miss, but the Valpo defense got hands in the passing lane and Carter came up with a steal.  After a pair of fouls to get the Crusaders to the bonus, Peters coolly knocked down two free throws with ten seconds remaining, and IPFW’s last shot was off the mark.

IPFW led from the start, quickly pulling ahead 14-5 less than six minutes into the game.  Valpo would score 18 of the next 26 points, capped by a Carter 3-pointer, to take a brief lead at 23-22 with 8:22 left in the half, but the Mastodons responded with the next five points to re-gain the advantage.  IPFW knocked down 3-pointers on each of its final two possessions of the first half, capping a half in which it went 8-of-13 from 3-point range and sending it into the locker room with a 42-33 edge.

Peters and Carter were the only two Crusaders in double figures, but the other three starters – Fernandez, Walker and junior Darien Walker (Chicago, Ill./Simeon [John A. Logan/Arizona Western]) – all finished with eight points apiece.  Valpo connected on a season-best 13 3-pointers – its sixth game with at least ten triples this year – and hit at a 52% clip from downtown.  Junior E. Victor Nickerson (Atlanta, Ga./Norcross [Charlotte]) tallied a team-best six rebounds, while Tevonn Walker handed out four assists to share team-high honors with Carter.

IPFW (6-4), which was dealt its first home loss of the season, placed all five starters in double figures, led by 17 points from McCray, who hit four 3-pointers.  Mo Evans led all players with seven rebounds and also handed out five assists.  The Mastodons lost despite shooting 50% both overall and from 3-point range, but the Crusaders limited IPFW to just 2-of-7 shooting from deep in the final 20 minutes.

Valparaiso (11-2) looks to reach a dozen wins before breaking for Christmas as it returns to the ARC on a quick turnaround for a 1:35 p.m. tip on Sunday against Goshen.  As always, all the action can be heard live on the Valpo Sports Network and seen on the Horizon League Network via ESPN3.com.  Links for the live video and audio, as well as live stats, will be available at ValpoAthletics.com.