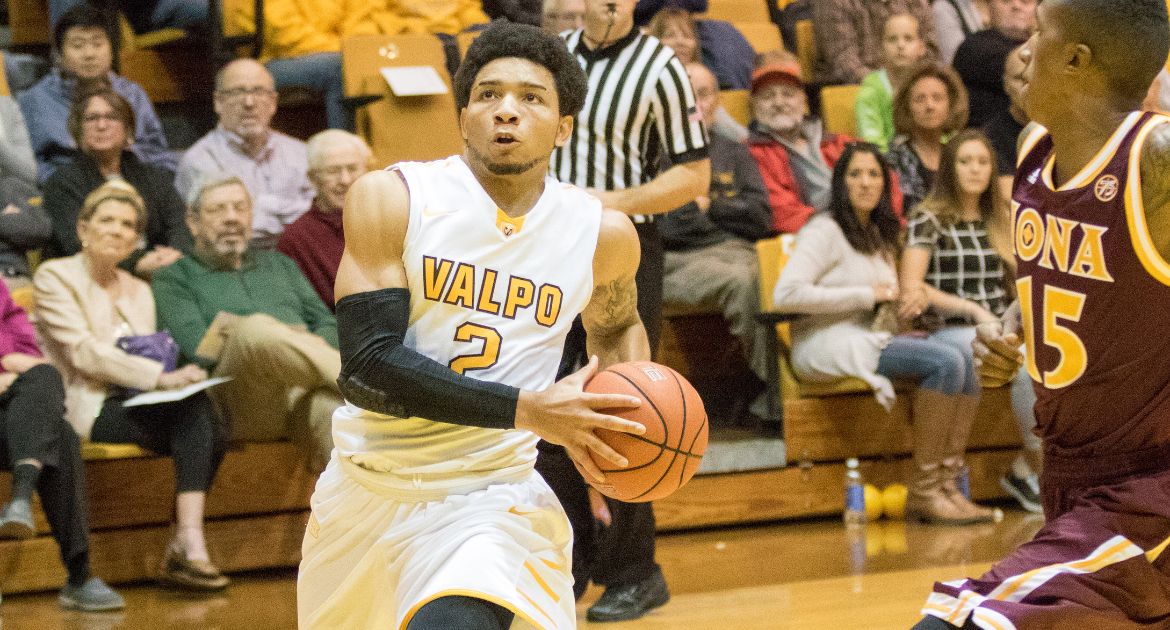 The Valparaiso University men’s basketball team made an early-season statement in a meeting between two of the nation’s top mid-major teams on Sunday, as the Crusaders started their showdown with Iona at the ARC on an 18-2 run and never looked back, eventually winning 83-58.

Sunday’s game pitted two of the top-six teams in the preseason Mid-Major top-25, as the Crusaders were ranked third in that poll and the Gaels ranked sixth. Both squads were picked to win their respective conferences in preseason polling and received votes in the first AP top-25 poll of the season.

An all-around team effort got the job done for the Crusaders on Sunday afternoon, as 10 players played at least 12 minutes – five of whom scored in double figures. Leading the way was sophomore guard Tevonn Walker (Montreal, Quebec/Vanier College), who scored 17 points in just 20 minutes of action, going 5-of-8 from the field and a perfect 6-of-6 from the foul line.

Speaking of Peters, he was his usual efficient self on Sunday. Letting the game come to him, Peters did not attempt a field goal for the first 19 minutes and took just four shots from the floor all game. But the junior still finished with 12 points, hitting a pair of 3-pointers – including one to beat the first-half buzzer – and was a perfect 4-of-4 from the foul line.

But for as impressive as the Crusader offense was, the defense was just as impressive, if not more so. Valpo limited Iona to just 29% shooting from the floor, and Fernandez showcased his prowess patrolling the area around the basket all afternoon. The Gaels attempted 39 two-point shots on Sunday – they hit 12 of them, while Fernandez blocked seven of them, just one shy of his own program single-game record. The Crusaders also forced 17 Iona turnovers, with Peters and sophomore Max Joseph (Montreal, Quebec/Vanier College) tallying three steals apiece – Joseph stuffed the stat sheet with four rebounds and five assists to go with his three steals.

The first minute of Sunday’s game would prove to be a microcosm of the next 39 minutes of action. Valpo won the jump ball, and 23 seconds into the game, Carter knocked down a 3-pointer off a feed from Walker. Then, on the defensive end, Fernandez recorded the first of his seven blocked shots on Iona’s first field goal attempt.

The Crusaders would open the game on an 18-2 run over the first six-plus minutes of the contest, limiting Iona to just one basket on its first 11 field goal attempts. Offensively, five different Valpo players contributed to that run with points, led by five early points from Hammink and four each from Walker and senior Darien Walker (Chicago, Ill./Simeon [John A. Logan/Arizona Western).

The lead would never fall under 11 points the rest of the way, and extended to as many as 21 points in the first half. Iona looked to make a run right before the break, scoring nine points in the final three minutes of the period, but Peters converted on a post move inside the final minute and then hit a wicked step-back 3-pointer to beat the first-half buzzer to make it a 42-25 game at the half. The Gaels would get no closer in the second period.

Valpo was at or above the 50% mark from the floor for a good portion of the game, only faltering in the late stages to finish at 42.6%. The Crusaders also went 9-of-22 from behind the 3-point line. Once again, Valpo made an impact at the free throw line as well, as after going just 7-of-13 from the line in the first half, the Crusaders hit 19 straight to start the second half and ended the game 28-of-36 (77.8%) from the charity stripe.

Iona (0-1) was led by 12 points apiece from A.J. English, the MAAC preseason Player of the Year, and Deyshonne Much, but the duo combined to shoot just 5-of-18 from the field. Taylor Bessick pulled down a team-best six rebounds in 12 minutes off the bench.

Valparaiso (2-0) looks to continue its strong start to the 2015-16 campaign as the Crusaders make their second-ever appearance on ESPN’s Tip-Off Marathon on Tuesday morning. Valpo will tip at Rhode Island Tuesday at 9 a.m. CT, and the game will be broadcast live on ESPN2, with Sean McDonough and Tim Welsh on the call. The game can also be heard on WVUR (95.1 FM, Valparaiso), with links for live video, audio and stats available via ValpoAthletics.com.