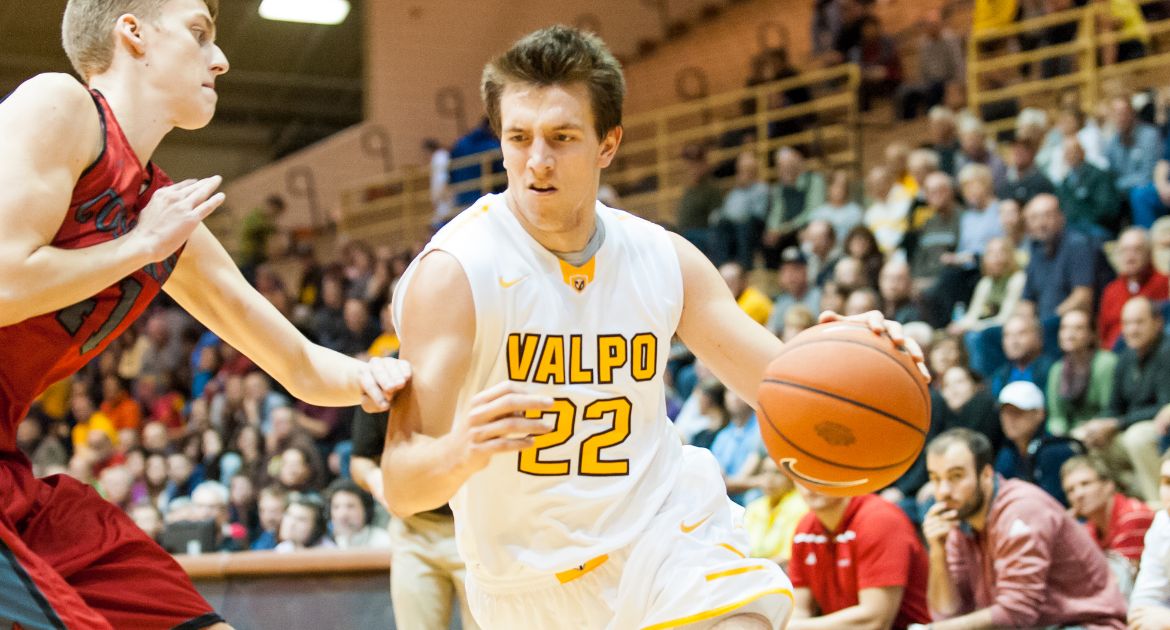 With some regulars recovering from injuries and others being given the night off by Crusader head coach Bryce Drew, the Valparaiso University men’s basketball team had a number of guys step up and fill roles Wednesday evening as the Crusaders defeated IU Kokomo at the ARC, 78-40.

Leading the way was junior forward Jubril Adekoya (Tinley Park, Ill./Andrew). Adekoya earned his first start of the year and played 33 minutes, shooting 8-of-10 from the floor for a game-high 20 points, setting a new career best. The junior also pulled down eight rebounds, just one off his career high.

Junior guard Nick Davidson (Munster, Ind./Andrean) took advantage of his extended run on Wednesday as well. Davidson surpassed his previous career high in the scoring column in the first half alone, ending the night with 13 points in 32 minutes. He also handed out four assists without committing a turnover.

Valpo did have two regular starters play on Wednesday, but both were limited in minutes. Junior Alec Peters (Washington, Ill./Washington) played just 12 minutes – all in the first half – and tallied 18 points on 6-of-8 shooting from the field, while sophomore Tevonn Walker (Montreal, Quebec/Vanier College) scored five points in eight minutes. Keith Carter (Maywood, Ill./Proviso East [Saint Louis]) and Vashil Fernandez (Kingston, Jamaica/Princeton Day [Md.] Academy) were both given the night off to rest, while Darien Walker (Chicago, Ill./Simeon [John A. Logan/Arizona Western]) and David Skara (Zadar, Croatia/Ekonomska Skola Zadar) continued to recover from injuries.

The Crusaders led pretty much start to finish, extending the lead to double digits for good as part of a 12-0 run midway through the half – a spurt which included seven points from Peters. A basket by Peters with 6:58 to play in the first half made it a 20-point lead for the first time, and the Crusaders would go on to lead 53-18 at the half. Valpo mainly ran clock throughout the second half while also playing a lot of zone defense, as Joseph, Davidson and Williams all played the entire 20 minutes in the second period.

Micah Pier and David Kelly tied for team-high honors for NAIA IU Kokomo (0-4) with eight points apiece. Bryan Powell grabbed 10 rebounds off the bench for the Cougars, who shot just 26.5% from the field.

Valparaiso (4-0), the first NCAA Division I team in the nation to four wins, looks to make it five Thursday evening as the Crusaders host Trinity Christian at the ARC. Tipoff is set for 7 p.m., and the game can be seen live on ESPN3.com and heard live on WVUR (95.1 FM, Valparaiso). Links for the live video, audio and stats will be available via ValpoAthletics.com.

Following the game, Drew and freshman Derrik Smits (Zionsville, Ind./Zionsville) addressed the media, as Drew announced that Smits will undergo season-ending ankle surgery in the coming weeks and will redshirt this season.