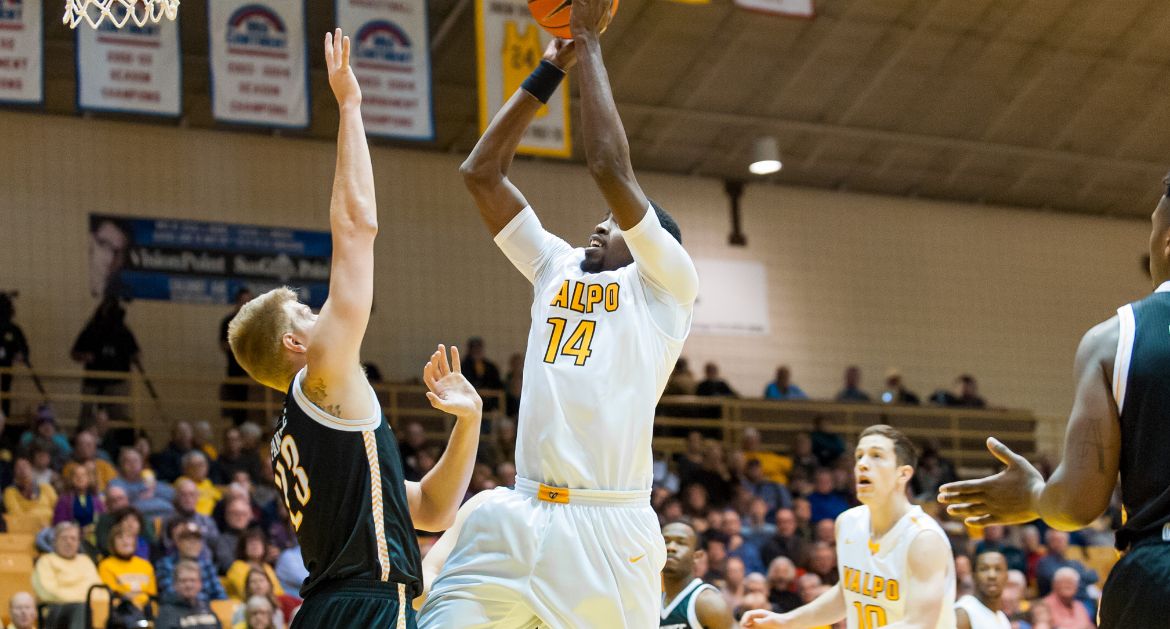 A new record for home winning streak at the ARC was established by the Valparaiso University men’s basketball team on Thursday night, as the Crusaders used their tried-and-true formula for winning games to defeat Milwaukee, 68-56, and win their 21st consecutive home game. The win also keeps Valpo alone atop the Horizon League standings.

Valpo, which has not lost at home since December of 2014, showed the Panthers why the Crusaders’ defense ranks among the best in the nation, limiting Milwaukee to just 56 points on 41.2% shooting from the field and a 9-of-26 effort from 3-point range. The Panthers scored 21 points in the first 11 minutes of the game, but could manage just 35 points the rest of the way as the Crusaders limited their opponent to fewer than 60 points for the 14th time in 17 games this season.

The other key this year for the Crusaders has been their balance on the offensive end of the floor, and that was at the forefront again Thursday night. Eight Valpo players finished with at least five points scored, while no Crusader scored more than 14 points. That high-water mark came courtesy of senior Vashil Fernandez (Kingston, Jamaica/Princeton Day [Md.] Academy), who hit his first six shots from the floor in setting a new season high in the scoring category.

The lead bounced back and forth in the early going, but the Panthers would hit six 3-pointers in the first 13 minutes of the game to get the better of the early portion of the game. Fernandez scored 10 of his points within the opening 11 minutes as well to keep the Crusaders within striking distance.

Milwaukee’s first-half advantage reached as many as five points, and it was still a four-point Panther edge with 5:14 to play in the period following a jumper by Akeem Springs. But as it has so often this season, the Crusader defense locked down, holding Milwaukee without a point over the next five-plus minutes, as the Panthers went 0-of-6 from the field with two turnovers in that stretch.

The offense took control for the game-changing run over that same span as well. It was a slow start to the run, as an Adekoya putback was the only basket over the next two minutes. But starting with a layup by Hammink with 3:05 to play in the half, the Crusaders would score on their next five possessions. Senior Darien Walker (Chicago, Ill./Simeon [John A. Logan/Arizona Western) knocked down a pair of 3-pointers, including one which banked in, while Hammink drove for another layup. Adekoya hit a pair of free throws with 12 seconds to play in the half to cap the 14-0 run, and while Milwaukee’s Jordan Johnson hit a pull-up jumper just before the buzzer, it was a 38-30 Crusader lead at the half.

The lead would be double digits for Valpo most of the second half. The Panthers scored the first basket out of the locker room, but layups by Skara and Tevonn Walker quickly pushed the lead back out to 10 points. Milwaukee would get no closer than eight points the rest of the way.

It was a team effort on the glass as well for Valpo on Thursday, with Fernandez and junior Alec Peters (Washington, Ill./Washington) tying for team-high honors with nine boards apiece. Tevonn Walker and Adekoya each added six rebounds as well. Milwaukee (12-6, 3-2 Horizon) was led by 15 points and 11 rebounds from Matt Tiby, while Jordan Johnson scored a game-high 19 points. Valpo would out-score the Panthers 40-16 in the paint for the game and also held a 20-0 edge in bench points.

Valparaiso (14-3, 4-0 Horizon) looks for another home victory on Saturday, as for the third straight game the Crusaders will face the second-place team in the Horizon League – this time welcoming Green Bay to the ARC. Tipoff is slated for 7 p.m., and it will be 90’s Night at the ARC. As always, the game can be seen live on ESPN3.com and heard live on WVUR (95.1 FM, Valparaiso), with links for the live video, audio and stats available via ValpoAthletics.com.