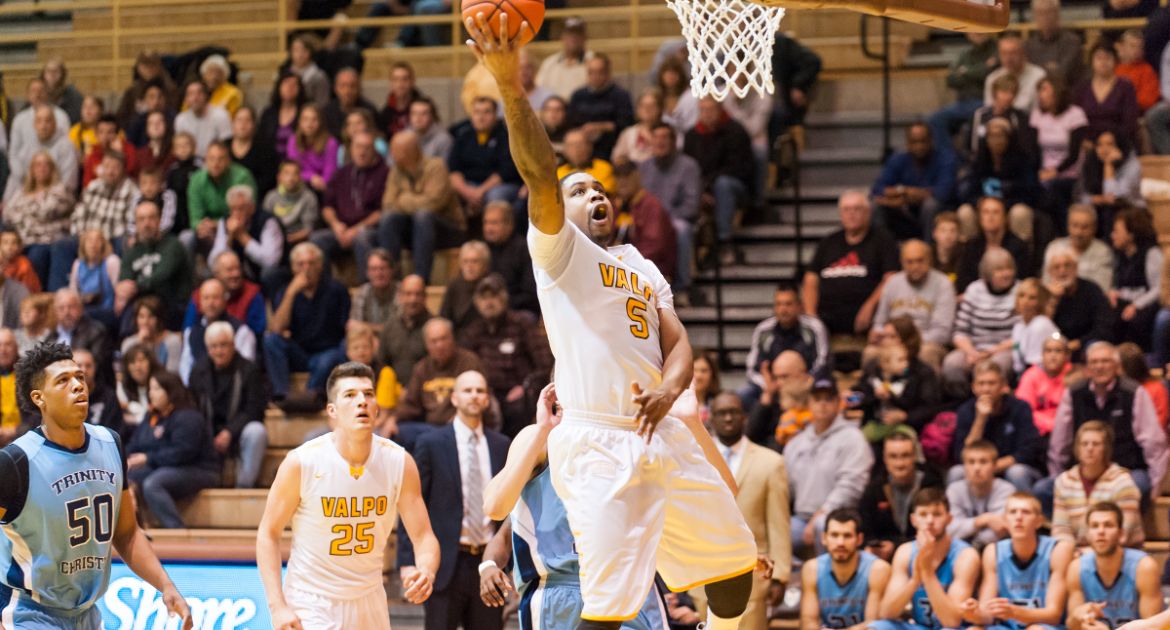 The Valparaiso University men’s basketball team used seven combined first-half 3-pointers from junior Alec Peters (Washington, Ill./Washington) and senior Darien Walker (Chicago, Ill./Simeon [John A. Logan/Arizona Western]) to jump out to a quick lead Monday in Youngstown, Ohio, and then used a tremendous advantage on the boards to control the rest of the game as the Crusaders defeated Youngstown State, 96-65.

The 31-point margin of victory matched the largest victory by the Crusaders in a Horizon League game since joining the league, tying Valpo’s 71-40 win over Milwaukee on Feb. 1, 2013. The 96 points also marked the most by Valpo in a league game since joining the Horizon League, and were the most by a Crusader squad in a regulation-length game versus a D-I opponent since posting 103 at Oakland on Dec. 21, 2010.

Meanwhile, Valpo’s advantage on the glass was simply extraordinary, as the Crusaders held double-digit rebounding edges in both halves en route to a 51-20 advantage for the game. Led by 12 rebounds from reigning league Player of the Week Vashil Fernandez (Kingston, Jamaica/Princeton Day [Md.] Academy) and nine boards by sophomore Tevonn Walker (Montreal, Quebec/Vanier College), Valpo out-rebounded Youngstown State by 31 boards – the Crusaders’ largest margin against a D-I opponent in at least two decades and their biggest advantage in any game since posting a +38 edge in a win over Purdue North Central on Nov. 18, 2010.

For the sixth time in 16 victories this season, Valpo never trailed in a winning effort, as Tevonn Walker gave the Crusaders the lead for good with a third-chance basket just over a minute into the game – a harbinger of things to come on the glass. Then Peters started his explosion, scoring 10 points in the next 3:30 as he reached double figures just 4:27 into the game, coming on back-to-back 3-pointers and a pair of inside baskets.

With the lead just six points about nine minutes into the ballgame, Darien Walker and Peters quickly changed that, as Walker connected on his first triple and then Peters hit his third to double the lead in just 26 seconds. The pair of triples jump-started a 21-4 run spanning just over four minutes. Later in the run, Walker would hit back-to-back 3-pointers to push the lead to 16 points at 30-14.

Sophomore David Skara (Zadar, Croatia/Ekonomska Skola Zadar) added back-to-back baskets on a two-handed tip-in and then a steal and fast-break layup, followed by Darien Walker’s fourth 3-pointer of the half to cap the run. Junior Jubril Adekoya (Tinley Park, Ill./Andrew) would continue the offensive onslaught with a pair of nifty inside moves and then an 18-foot jumper on three straight trips, the last of which pushed the lead to its first-half apex – 43-18 with 4:57 to play. Youngstown State closed back to within 17 points, but Valpo closed the half on a 7-0 spurt, capped by a 3-point play from senior Keith Carter (Maywood, Ill./Proviso East [Saint Louis]) with less than three seconds to play, to make it 52-28 Crusaders at the break.

If there was any doubt as to the result, it was quelled in the first four minutes of the second half, as the Crusaders opened the period on a 10-0 run. Peters started things off with a triple on Valpo’s first possession, and Fernandez scored six points during the spurt as Valpo led by 35 with 16 minutes to play. The lead reached 39 points on a pair of free throws by Shane Hammink (Millingen aan de Rijn, Netherlands/Oakley College [LSU]) with 13:23 remaining and would not fall under 28 the rest of the way , as head coach Bryce Drew made liberal use of his bench in the second half. No starter played more than eight second-half minutes, while all eight bench players played at least four minutes of the final 20.

Darien Walker and Peters tied for team-high honors with 18 points apiece, as Walker went 4-of-5 from 3-point range and Peters was a perfect 4-for-4 to finish as joint leading scorer despite playing just 14 minutes. Adekoya added 12 points on 4-of-5 shooting off the bench – his third double-figure scoring effort in as many career games at Youngstown State – while Fernandez posted 10 points to go with his 12 rebounds – his second consecutive double-double.

Valpo finished the game shooting just a shade under 50% from the field, going 34-of-72, and hit 10 3-pointers – the fourth time this season the Crusaders have hit at least 10 triples. Valpo was also nearly perfect from the foul line, hitting its first 15 in ending the game 18-of-19 (94.7%) from the stripe. 12 of the 13 players who saw action for the Crusaders on Monday scored at least two points.

Youngstown State (7-13, 2-5 Horizon) was led by a game-high 23 points from Cameron Morse on 10-of-16 shooting. Jordan Andrews added 12 points, while Bryce Nickels finished with 11 points and five rebounds.

Valparaiso (16-3, 6-0 Horizon) takes its six-game winning streak back on the road this weekend as the Crusaders make the southern-most road swing in league play. The trip starts with a Friday night game at Wright State – the fourth time in the last five games Valpo will compete in a game pitting the top two teams in the league standings. Tipoff is slated for 6 p.m., with live video on ESPN3.com and, as always, the live audio broadcast on WVUR (95.1 FM, Valparaiso). Links for the live video, audio and stats will be available at ValpoAthletics.com.