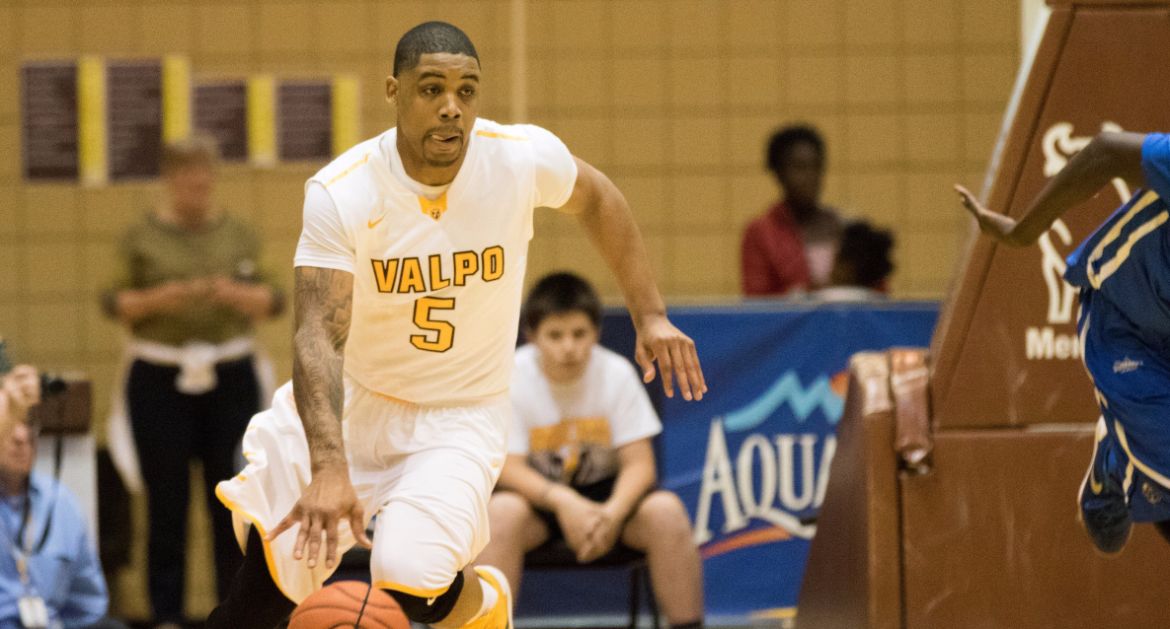 The Valparaiso University men’s basketball team rallied to re-claim the lead with less than four minutes to play in a Horizon League battle with Wright State Friday night in Dayton, Ohio, but the Raiders scored the next eight points as the Crusaders eventually fell by a 73-62 final, suffering their first defeat within league play.

The Crusaders found themselves trailing 48-41 with inside of 10 minutes to play following a 16-0 Wright State run, but rallied from behind. Over the next two-plus minutes, Valpo went on a 10-3 spurt, getting a pair of free throws twice followed by an Alec Peters (Washington, Ill./Washington) 3-pointer, to tie the game at 51-all.

Wright State answered with the next five points on two trips down the court, but Valpo responded, holding the Raiders scoreless on their next four trips. Sophomore Tevonn Walker (Montreal, Quebec/Vanier College) hit two free throws and senior Vashil Fernandez (Kingston, Jamaica/Princeton Day [Md.] Academy) had a putback in the lane to pull the Crusaders within one. Almost two minutes later, following the defensive stops, Walker came up with a steal and fed fifth-year senior E. Victor Nickerson (Atlanta, Ga./Norcross [Charlotte]) for a fast-break dunk to put the Crusaders ahead 57-56 with 3:36 remaining.

But Wright State responded immediately, as Mark Alstork hit a 3-pointer on its next possession. Then, following a Crusader miss, the Raiders were fouled and hit two free throws, and after another stop, WSU got a second-chance basket to push its lead to 63-57 with 1:39 to play. Valpo would get no closer than five points the rest of the way, as the Raiders went 10-for-12 at the foul line over the final minute.

The game started slowly offensively for the Crusaders on Friday, as they would not score until nearly six minutes into the contest, but Valpo limited WSU to six points in that same stretch to stay close. The first half was highlighted by the shooting of senior Darien Walker (Chicago, Ill./Simeon [John A. Logan/Arizona Western]) off the bench. Walker followed up his 4-for-5 performance at Youngstown State on Monday with a 5-for-5 effort from deep in the opening 20 minutes Friday, scoring 15 of Valpo’s first 21 points.

It looked like Valpo would take a six-point lead into the break, with the ball and with the shot clock off, but a rebound off a missed shot went to the Raiders and WSU’s Grant Benzinger hit a 70-footer at the buzzer to cut the Crusaders’ lead at the break to 25-22. Undeterred, Peters hit a 3-pointer on the second possession of the second half to push the lead back to six points, and Valpo would go ahead by nine points three separate times. But all three times, the Raiders got baskets – the last of which sparked the game-changing 16-0 run.

The Raiders’ strong defense gave the Valpo offense fits Friday, as the Crusaders shot just 36.1% from the field for the game. Valpo did out-rebound the Raiders by a 42-31 margin, led by 11 rebounds from Peters, who finished with 14 points as well. Darien Walker paced the Crusaders with 17 points. Valpo played the last 11:25 without starting point guard Keith Carter (Maywood, Ill./Proviso East [Saint Louis]) following an injury.

Valparaiso (16-4, 6-1 Horizon) dropped into a tie for first in the league standings with Friday’s loss and will look to bounce back Sunday afternoon when they play at Horizon League newcomer Northern Kentucky. Tip is slated for noon CST, with the game being broadcast nationwide on American Sports Network affiliates – including in the Valpo area on Comcast SportsNet Chicago. As always, you can hear the action live on WVUR (95.1 FM, Valparaiso), with links for the live video, audio and stats available at ValpoAthletics.com.