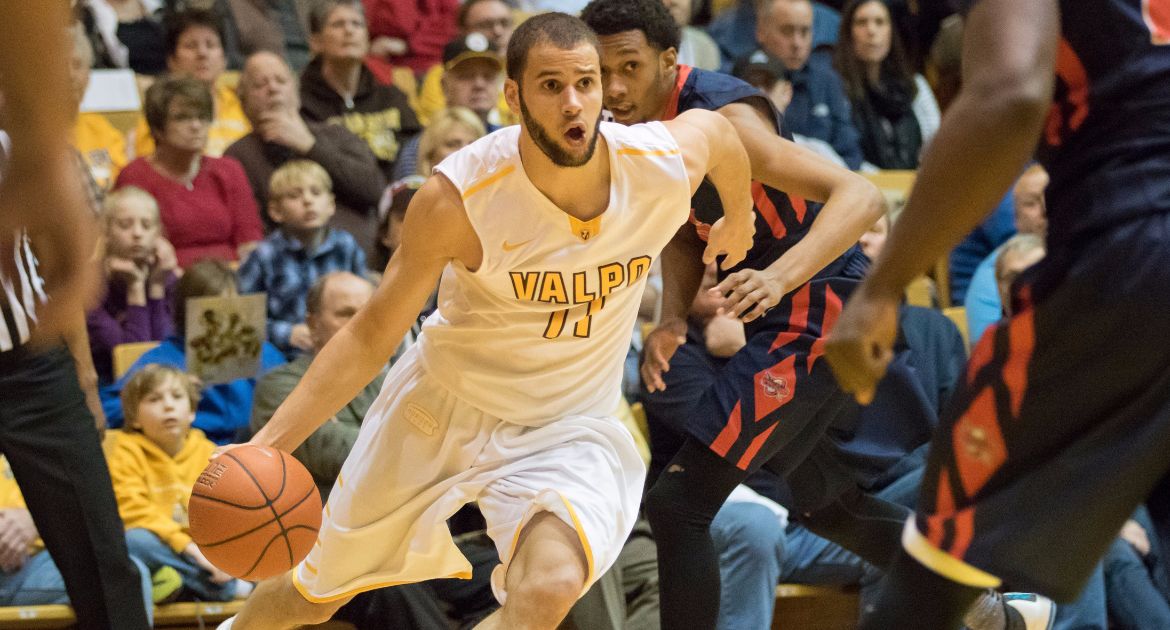 A drama-filled weekend reached its crescendo at 3:52 p.m. Sunday afternoon at the Resch Center in Green Bay, Wis., as junior Shane Hammink (Millingen aan de Rijn, Netherlands/Oakley College [LSU]) rose up and delivered a dagger of a 3-pointer from the top of the key with 2.2 seconds to play as the Valparaiso University men’s basketball team ended the regular season with a 70-68 win over Green Bay. With the win, the Crusaders close the regular season at 26-5 overall and 16-2 in Horizon League play – the first team to win the league regular season title by three or more games since the 2009-10 Butler squad.

Hammink’s shot capped off a closing stretch which was a microcosm of the game as a whole, as there were seven lead changes in the final 4:11 of the contest, including five in the final three minutes. The Crusaders had the ball trailing 68-67with the shot clock off following a basket with 20 seconds to play by Jamar Hurdle, and with no timeouts left, senior Keith Carter (Maywood, Ill./Proviso East [Saint Louis]) brought the ball up the court.

Carter received a ball screen from junior Alec Peters (Washington, Ill./Washington), worked off it to the right-hand side and then drove the lane. As Carter drove, Hammink filled in the gap at the top of the lane and was ready when Carter dished the ball to him. With no defender within five feet, the lefty nailed the 3-pointer to put the Crusaders ahead by two with just over two seconds remaining. Following a timeout, Green Bay’s Jordan Fouse attempted a full-court heave on the inbounds pass, but it ricocheted off the backboard into the arms of Carter and time ran out to close the curtains on the regular season.

It seemed like for most of the final few minutes that whichever team had the ball last would take home the win on Sunday. Hammink and Peters knocked down 3-pointers on back-to-back possessions to give Valpo a 60-59 lead with 4:11 remaining. Two possessions later, Carrington Love’s driving layup returned the lead to the Phoenix, but Carter responded with a triple of his own to make it 63-61 Valpo with 3:01 to play.

Two trips later, Khalil Small knocked down a jumper in the paint to tie the game for Green Bay. After an empty Valpo possession, the Phoenix had a chance to take the lead, but a miss ended up in the hands of Peters, who was fouled. The junior hit both ends of the one-and-one with 1:19 remaining, but on the other end, a third-chance opportunity for Fouse fell as he was fouled, and the Phoenix senior completed the three-point play to give Green Bay a 66-65 lead.

On the offensive end, Carter found Peters in the post, who worked through a double-team and found a clear path to the basket for a layup with 43 seconds to play, giving the Crusaders a one-point edge. Hurdle converted inside for the Phoenix on the other end to set up Valpo’s game-winner from Hammink.

The entire game was played within a nine-point spread, featuring 15 ties and 23 lead changes. Green Bay never led by more than five points – a 28-23 edge the Phoenix gained with 6:23 left in the first half, and one which the Crusaders erased with seven straight points over the next 1:41.

Meanwhile, Valpo’s biggest lead came following a 9-2 run in the second half, a run which culminated in back-to-back baskets by junior Jubril Adekoya (Tinley Park, Ill./Andrew) and senior E. Victor Nickerson (Atlanta, Ga./Norcross [Charlotte]) to give the Crusaders a 52-48 lead with 11:31 to play. But the Crusaders would be held scoreless for nearly six minutes, as Green Bay scored six consecutive points to regain the lead and set up the drama of the final minutes.

Peters led Valpo on Sunday with his 12th double-double of the season, eight of which have come within Horizon League play. The junior ended the game with 25 points and also grabbed a career-best 15 rebounds to lead all players. With his 19th point of the game, Peters passed Bruce Lindner for seventh position on Valpo’s all-time scoring chart and enters the Horizon League Championship with 1,546 career points.

Peters was one of three Crusaders to go 3-for-5 from the 3-point line on Sunday, as both Carter and Hammink did so as well on their way to double-digit scoring performances. Hammink scored in double figures for the fourth straight game, finishing with 11 points, while Carter tallied 10 points and led all players with seven assists. Overall, Valpo shot 43.3% from the floor, but was 10-of-23 from 3-point range – the third straight game the Crusaders have hit at least 10 triples.

Green Bay (19-12, 11-7 Horizon), which was already locked into the fourth seed for the upcoming league tournament prior to Sunday’s game, placed five players in double figures in a balanced effort. Small paced the Phoenix with 14 points, while four other Green Bay players scored at least 11 points. Fouse and Kenneth Lowe led the Phoenix effort on the glass with eight boards apiece as Green Bay grabbed 20 offensive rebounds and out-rebounded the Crusaders, 43-42 – the first time in league play this season that Valpo was outrebounded.

The win also marked the Crusaders’ 26th victory of the season, only the third time in program history the team has won at least 26 games – the 2012-13 squad won 26 games, while last year’s team won a school-record 28 contests.

Valparaiso will now be off until next Monday, as the Crusaders have a double-bye into the semifinals of Little Caesars Motor City Madness. The Horizon League tournament will be contested in a single-site format for the first time since the Crusaders joined the league in 2007-08, as all four rounds of the tournament will be played at Joe Louis Arena in Detroit from Mar. 5-8.As the top overall seed, Valpo’s first game will be the first semifinal contest on Monday, Mar. 7, tipping off at 6 p.m. CT live on ESPNU.