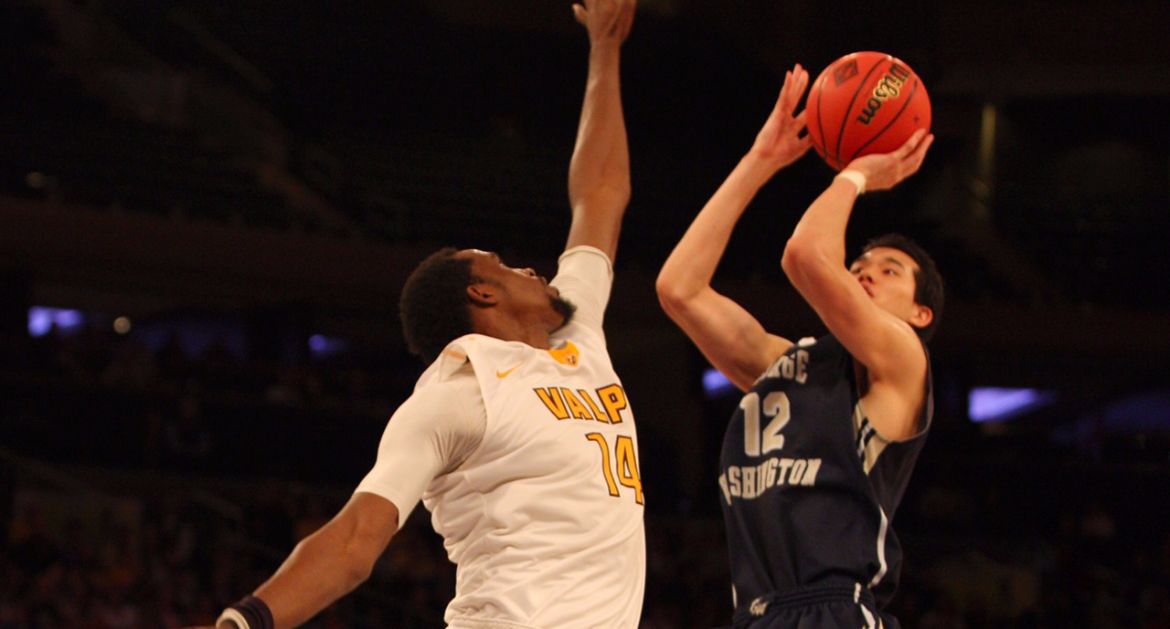 The Valparaiso University men's basketball team came up one step short of its first postseason championship in program history Thursday night at Madison Square Garden, as the Crusaders were unable to make a run at George Washington in the second half and fell by a 76-60 final in the NIT championship game. The loss ends Valpo's season with a 30-7 record, as the Crusaders set a new program record for victories in a historic 2015-16 campaign.

Junior Alec Peters (Washington, Ill./Washington) represented Valpo on the NIT All-Tournament Team after averaging 20.8 ppg and 8.6 rpg over the tournament's five games, including 15 ppg and 9.5 rpg in the two games at Madison Square Garden. Meanwhile, senior Vashil Fernandez (Kingston, Jamaica/Princeton Day [Md.] Academy) blocked five shots on Thursday, ending his season with 119 blocked shots and his career at Valpo with 289 rejections. Fernandez set new program records in both categories, set the Horizon League single-season record for blocks and will end the 2015-16 season leading all NCAA Division I players in blocks/game (3.3 bpg).

While Valpo took the lead quickly on Thursday, George Washington scored the next seven points and would hold the lead for the majority of the first half. The lead was as many as nine points in the first half, and was still eight at 24-16 with 7:34 to go in the half, before the Crusaders made a quick run.

Senior Keith Carter (Maywood, Ill./Proviso East [Saint Louis]) kick-started the spurt with a 3-pointer, drew an offensive foul on the next defensive possession, and then drove the lane for a runner. After another GW turnover, Carter hit Peters for a fast-break 3-pointer to tie the game at 24-24 with 5:23 to play in the first half.

Valpo would briefly take the lead as the game approached halftime, as after the teams traded triples, David Skara (Zadar, Croatia/Ekonomska Skola Zadar) had a tip-in off a Crusader miss to give Valpo a 29-27 lead as the half clicked under two minutes to play. The Colonials would score the next five points, but junior Shane Hammink (Millingen aan de Rijn, Netherlands/Oakley College [LSU]) was fouled with just over one second remaining in the half and made both free throws to send the Crusaders into halftime trailing just 32-31.

But the Crusaders could not regain the lead in the second half, as George Washington started the final 20 minutes on a 15-4 run to go ahead 47-35. On a number of occasions, Valpo would cut the Colonials’ lead to 10 points, but the Crusaders could never get back within single digits after the half-opening run.