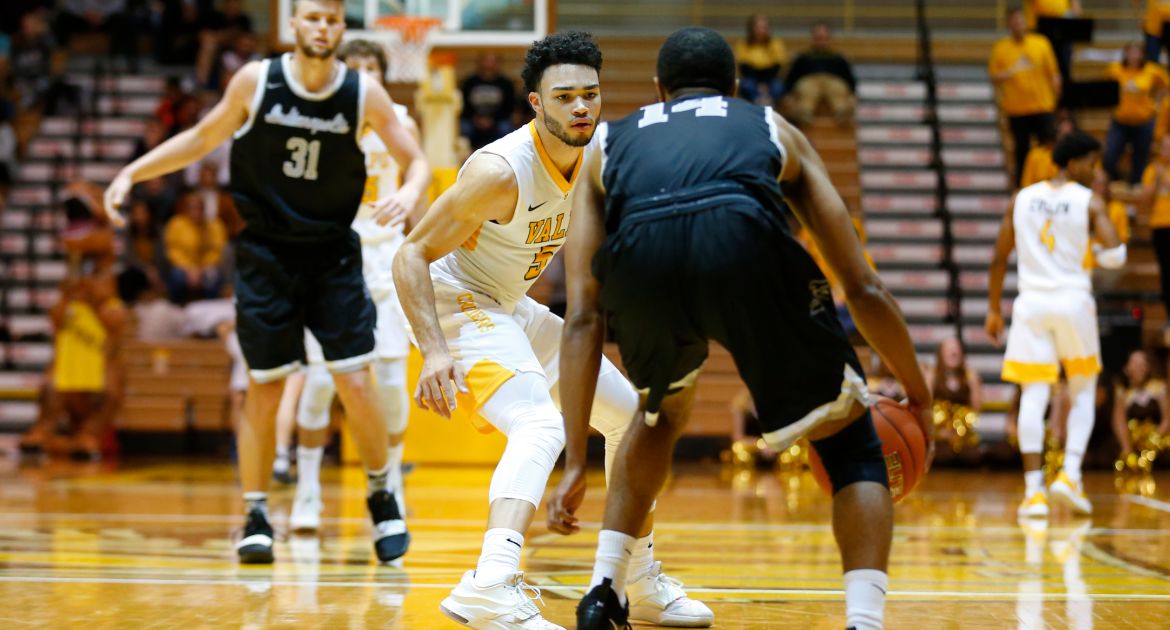 Next Up in Valpo Basketball: The Valparaiso University men’s basketball team tips off the 2018-19 season on Tuesday evening with the earliest season opener in program history, kicking off the year against Concordia University Chicago at the ARC.

Last Time Out: A last-second 3-point effort would not fall for Valpo in its lone exhibition game prior to the start of the 2018-19 season last Thursday night, as it dropped a 60-57 decision to UIndy. Derrik Smits paced the Brown and Gold with 13 points and nine rebounds against the Greyhounds.

Head Coach Matt Lottich: Matt Lottich (39-26) enters his sixth season overall at Valpo and third as head coach in 2018-19. Lottich led Valpo to 15 victories in his second season in charge in 2017-18 and guided the Crusaders through the move to the Missouri Valley Conference, which ended the campaign ranked eighth nationally in conference RPI. In his first season at the helm of the Crusader men’s basketball program, Lottich guided Valpo to its fifth Horizon League regular season championship in the last six years as he led the Crusaders to 24 wins and an at-large berth into the NIT.

Series Notes: Valpo owns a 13-3 advantage in the all-time series with Concordia University Chicago and has won each of the last 13 matchups. The last meeting between the two programs came in the opening round of the 1969 NCAA Tournament, a game which saw Valpo earn a 91-81 victory in Hilltop Gym.

...in the exhibition
- This was the third time in as many exhibition matchups between the two squads in the last decade that has been a tightly contested game. In 2009, UIndy beat Valpo 88-83 in an exhibition matchup, while Valpo won 75-67 in 2015 in a game that was within three points with 30 seconds to play – kicking off a season which resulted in the NIT championship game appearance.
- Valpo led by as many as nine in the first half before taking a 30-27 lead into the half.
- UIndy scored six straight points to start the second half to take the lead.
- Valpo put together an 11-0 run to go up by eight points with 11:20 remaining, but UIndy rallied and took the lead for good with about four minutes to play.
- Both teams struggled shooting from the floor, as both squads came in just shy of 35%. UIndy did hit eight 3-pointers to Valpo’s three from behind the arc.
- Valpo committed just nine turnovers to UIndy’s 14 miscues and held a 15-4 advantage in points off turnovers.
- UIndy out-rebounded Valpo by a 45-36 margin.

...looking ahead
- Following Tuesday’s season opener, Valpo will be idle for nine days before kicking off the Myrtle Beach Invitational on Thursday, Nov. 15 against Western Kentucky.

...at the ARC
- Valpo has 15 regular season home games scheduled at the ARC this season.
- Valpo posted a 10-4 record at home last year, its eighth consecutive season reaching double figures in home victories
- Valpo has recorded a 57-8 record in home games since the start of the 2014-15 season.
- Over the last 23 years, Valpo owns a 292-64 (.820) record on its home court at the ARC.

...in home openers
- Valpo has won its home opener each of the last 13 years, including 12 victories by double digits.
- Last season, Valpo rolled to an 88-46 win over North Park in its home and season opener, led by 20 points in just 16 minutes off the bench from Micah Bradford.
- The last time Valpo lost a home opener was Nov. 27, 2004, falling to Charlotte 85-71.

@CUC_MenHoops
- The Cougars are coming off a 2017-18 campaign in which they went 2-23, and posted a 1-19 record in NACC play.
- Concordia is led by senior guard Mitch Pelissier, who averaged better than 21 points per game last season and enters his final year already with 1,279 career points.

Tough Road Slate Awaits
- Following Tuesday’s season opener with Concordia University Chicago, Valpo will kick off a challenging slate of games away from home in the non-conference portion of the schedule.
- The three-game Myrtle Beach Invitational pits Valpo against Conference USA preseason favorite Western Kentucky to open play.
- Valpo will play four true road games in the non-conference slate - two against Sweet 16 teams from a season ago in West Virginia and Texas A&M, as well as games at UNLV and George Washington.

Redshirts Aplenty
- Valpo boasts five players who have redshirted on its active roster entering the 2018-19 season.
- Derrik Smits redshirted due to injury in his first year at Valpo, while Bakari Evelyn and Ryan Fazekas each sat out as a redshirt after transferring from Nebraska and Providence, respectively.
- Deion Lavender and Markus Golder both redshirted before arriving at Valpo as well.
- Only 12 schools nationally have more redshirts on their active roster this year than Valpo’s five.
- Valpo also has a pair of Division I transfers in Eron Gordon and Nick Robinson sitting out this season as redshirts as well.

What’s Back
- Seven letterwinners return from last year’s team, including three starters.
- The returnees are highlighted by MVC All-Newcomer Team honoree Bakari Evelyn and MVC All-Bench Team selection Markus Golder.
- In all, Valpo returns 63.3% of its scoring, 66.6% of its rebounding and 64.1% of its minutes played from last season in 2018-19.

What’s New
- Five players will make their Valpo debuts this season.
- Valpo’s lone senior is a graduate transfer, as Deion Lavender joins the program for his final season of collegiate eligibility after spending the last two years at UAB.
- Junior Ryan Fazekas is eligible this year after sitting out last season as a transfer from Providence.
- Valpo welcomes a trio of true freshmen to the fold this year as well: Chicago native Javon Freeman, Winnipeg product Daniel Sackey and a Region representative in Bowman Academy graduate Langston Stalling.

Developing Pros
- Valpo has produced a myriad of professional basketball players over the last 25 years, most notably a pair of NBA players in the last two years.
- Ryan Broekhoff (class of 2013) signed a contract with the Dallas Mavericks in the summer of 2018 after spending five seasons playing internationally in Russia and Turkey.
- Alec Peters (class of 2017) was the 54th pick in the 2017 NBA Draft by the Phoenix Suns. Peters appeared in 20 games as a rookie for the Suns in 2017-18, highlighted by a 36-point performance in the season finale against Dallas - a new single-game high by a Valpo alum in the NBA.
- Peters is currently playing for CSKA Moscow in Russia.
- 2018 Valpo graduates Tevonn Walker and Max Joseph are currently playing for Hamburg Towers in Germany and Nassjo Basket in Sweden, respectively.
- Valpo has now produced 50 pro basketball players over the last 25 years.

Non-Conference Success
- Valpo is looking to continue its recent string of successful non-conference campaigns.
- The Crusaders have entered conference play with at least 10 victories under their belt in four of the last six years and just missed the mark last year, going 9-4 prior the start of conference play.
- Valpo owns a 60-23 (.723) record in pre-league action over the last six seasons.