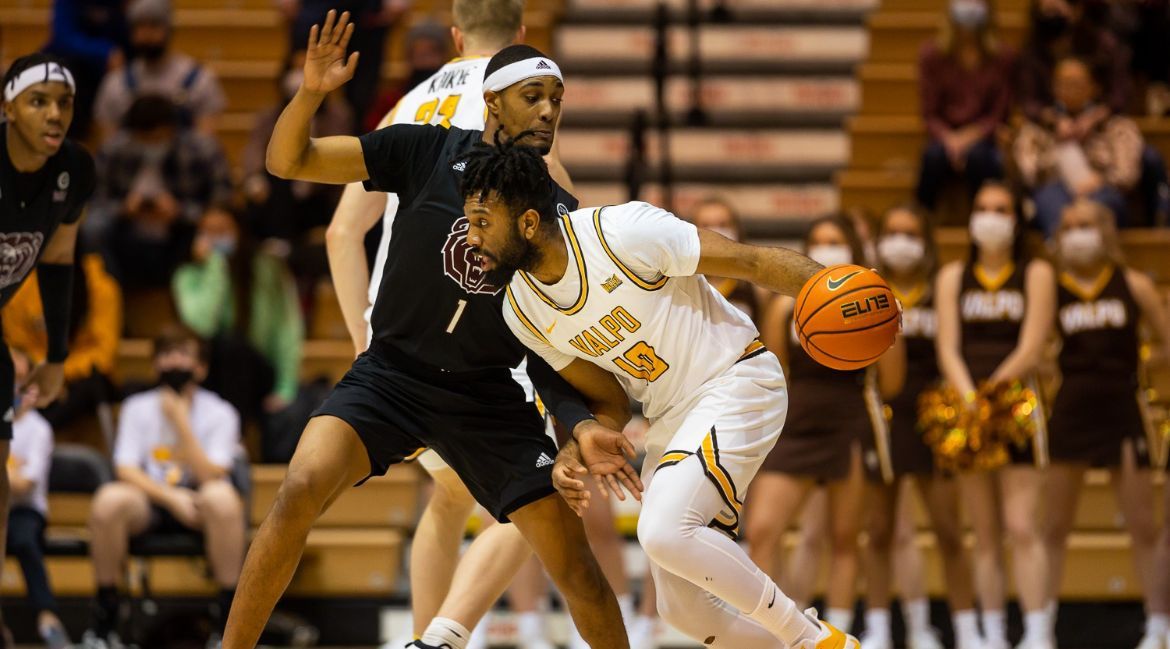 Eron Gordon is one of three Valpo players who has seen action in all 18 games.
UNI at Valparaiso | January 19, 2022
Related Links
Related Links

Next Up in Valpo Basketball: The Valparaiso University men’s basketball team will play its second consecutive home game on Wednesday night as UNI makes its way to the Athletics-Recreation Center for a midweek Missouri Valley Conference matchup. For the first time this season, Valpo will play its second meeting of the year against an MVC opponent after these two foes locked horns in Cedar Falls on Jan. 5. Masks are required for all spectators, event staff members and media members during all home Valpo athletic events until further notice.

Last Time Out: Valpo incurred a 74-57 setback to Missouri State on Saturday in a nationally-televised affair at the Athletics-Recreation Center. Isiaih Mosley posted 32 points for visiting Missouri State, his third straight game with 30+ points. Valpo scored nine straight spanning the end of the first half and start of the second half to cut what had been a 14-point deficit to five with 19:23 to play, but Missouri State scored the next eight points and never looked back. Ben Krikke paced the Beacons with 14 points, while freshman Darius DeAveiro chipped in eight points, four rebounds and two assists off the bench.

Head Coach Matt Lottich: Matt Lottich (91-88) is in his ninth season overall at Valparaiso University and sixth as the head coach of the men’s basketball program in 2021-2022. The 2020-2021 season saw Valpo improve its Arch Madness seeding for the fourth straight year as the program continued to make positive strides in each season as a Missouri Valley Conference member. The team earned a first-round bye in the State Farm MVC Tournament for the first time since joining the prestigious league. Valpo upset previously-undefeated Drake, the nation’s No. 25 team, 74-57 on Feb. 7, 2021 at the ARC, the fourth win over an AP Top 25 team in program history and second under Lottich. The Bulldogs were one of three undefeated teams in the nation prior to that setback, joining Gonzaga and Baylor. Just two years removed from finishing in last place and being knocked out in the first round of the Missouri Valley Conference Tournament as a first-year Valley member, Lottich’s team did more than hold its own in 2019-2020, ascending into a tie for sixth in the league standings before finishing as the conference tournament runner-up. Valpo became the first team in the history of Arch Madness to reach the title game after playing in the opening round. Lottich, hired as the 22nd head coach of the Valpo men’s basketball program in April 2016, graduated from Stanford University in 2004 and New Trier High School (Illinois) in 2000.

Series Notes: Valpo will look to reverse its fortunes in the all-time series on Wednesday night as the Beacons hold just a 4-29 record in games played against UNI including a 92-65 setback earlier this season. Valpo is 2-7 against UNI since joining the Missouri Valley Conference. The last three showdowns between these two teams have occurred in Cedar Falls as this will represent the first time Valpo has hosted UNI since Feb. 5, 2020. In this year’s first matchup, UNI’s Noah Carter scored 20 points, while Trae Berhow added 17. The Beacons did a good job keeping MVC Preseason Player of the Year and UNI leading scorer AJ Green in check, as he was held to just nine points on 3-of-7 shooting. That is Green’s lowest scoring output in MVC play this season. Valpo was paced by Kevion Taylor with a 17-point performance, while Kobe King added 14 points and nine rebounds. Improvement on defense from the first matchup will be a focus for Wednesday as the 92 points allowed mark the most in a single game during the Matt Lottich Era (sixth season). It was the most points Valpo had permitted since March 7, 2016, a 99-92 overtime loss to Green Bay in the Horizon League Tournament in Detroit. However, Valpo did play the game at UNI shorthanded as starting center Thomas Kithier was unavailable due to COVID-19 health and safety protocols.

Milestone Met: During the Jan. 8 game vs. Southern Illinois, Kevion Taylor surpassed 1,800 points for his collegiate career (split between D-I and D-II). He became just the 32nd active player at all levels of NCAA college basketball to reach the 1,800-point threshold. Taylor became just the 16th active player in the NCAA (all three divisions) with 1,800 points and 600 rebounds. Furthermore, Taylor has scored more collegiate points than Michael Jordan (1,788).

Ramblers on the Ropes