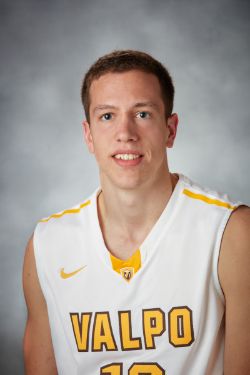 2014-15: Appeared in all 34 games for the Crusaders as a freshman, making the majority of his appearances off the bench ... earned one start, making first career starting appearance Dec. 10 against Trinity International ... averaged 5.4 points and 3.2 rebounds per game as a rookie ... tied for third on the team in both assists (60) and blocked shots, and ranked second with an .809 free throw percentage ... scored in double figures on eight occasions ... led Valpo in scoring twice, rebounding three times and assists in five games ... earned All-Tournament Team honors at the Horizon League Championship as he led Valpo with 12 points in its 54-44 title game win over Green Bay ... went 5-for-8 from the floor in the win over the Phoenix and hit a pair of 3-pointers ... debuted Nov. 14 against East Tennessee State with 11 points and five rebounds in 15 minutes off the bench ... scored season-best 17 points and also handed out a season-high six assists without committing a turnover in Nov. 19 win over IU South Bend ... grabbed a season-high nine rebounds in win at Eastern Kentucky Dec. 3 ... scored 11 points in his start against Trinity International ... filled up stat sheet in win over Goshen Dec. 21, posting nine points, seven rebounds and four assists ... grabbed seven rebounds in Horizon League win at Wright State Jan. 17 ... scored 14 points on 4-of-5 shooting from the field and a perfect 5-of-5 effort from the foul line Jan. 26 in win over Milwaukee ... played a season-high 29 minutes in win over Oakland Feb. 8, scoring 14 points to match his season high within league play ... handed out four assists without committing a turnover in NCAA Tournament game against Maryland Mar. 20.

Personal: David is the son of Mladen and Slavica Skara ... major is international business.