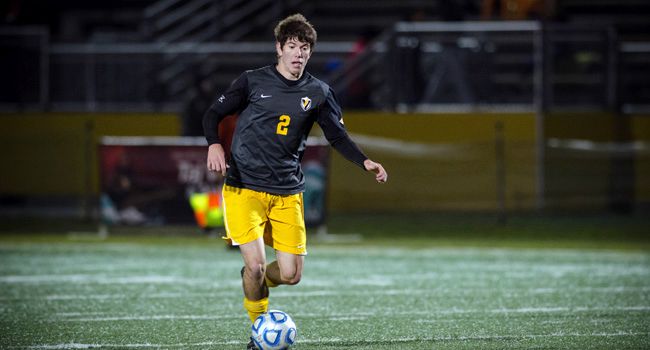 The Crusader men posted a 0-0 draw Friday night in Jacksonville, despite being a man down for the final 23 minutes of regulation and the duration of overtime.  Although the team was unable to walk away with the result that they had hoped for, head coach Mike Avery was pleased with the fight and attitude his team showed.

“I’m proud of the guys tonight,” said Avery. “I didn’t think it was our best performance in terms of sharpness. I thought we had some heavy legs, maybe from the travel or maybe from the weather, but at the end of the day I thought we showed a lot of spirit and a lot of fight. Under some pretty difficult conditions we were able to grind out a result.”

Playing with heavy legs indeed, Valpo was unable to develop any type of rhythm during the first half of play; as a result, the Crusaders struggled to keep the ball and were outshot by the Dolphins 6 to1.

The second half, however, saw the Crusaders settle into the remainder of the game nicely, as the team was able to hold onto the ball and build an attack. This led to Valpo creating several quality chances early in the period. Charles Barden (Cedar Rapids, Iowa/Linn-Mar), Jesse Ortiz (Aurora, Ill/West Aurora), Todd Vervynckt (Plymouth, Ind. /Plymouth), and Omar Lawrence (Kingston, Jamaica/Excelsior) each took shots for the Crusaders. The team also earned two corner kicks, but could not convert on either chance. Although the Crusader attack was unable to produce a goal, Avery recognizes that it takes time.

"We have to build some pieces into the attack but it’s early in the season and we’re still trying to figure some things out,” said Avery.

The run of play continued to favor Valpo until a Crusader player was sent off for a “high elbow” in the 67th minute of play. Forced to play a man down for the remainder of the contest, the Crusaders relied on a defense that very rarely concedes goals. Tonight was no different, as a rebuilt back line limited the amount of quality chances from the Dolphins.  Yannick Iwunze (Paris, France/Hightower [Tex.] H.S.), Mitch Albrecht (Batavia, Ill/Batavia), Adrian Graham (Kingston, Jamaica/St. George’s College), and Lawrence anchored the back line. The Valpo defense would bend, but never break.

Redshirt junior, Tom Serratore (Tinley Park, Ill. /Andrew) did well to earn his first career shutout, as the Crusader goalkeeper was tested early and often Friday night.  Each of Serratore's 8 saves were vital in keeping the Crusaders level with the Dolphins, but none was more important than the effort seen in the 97th minute and first period of overtime. With a free kick awarded to the Dolphins just outside of the Crusader penalty area, Serratore extended to make a superb diving save on a ball that seemed certain to find the back of the net.

“I think one of the biggest question marks coming into the season was how our back four was going to be rebuilt and how  we were going to replace a goalkeeper like Kyle Zobeck who is now playing in the MLS,” said Avery. “Fortunately, Tom Serratore was unbelievable tonight - he made two or three fantastic saves tonight - and we’ve got Nico Campbell, another really good goalkeeper, on the sideline waiting his turn. Tonight we showed that we have a very strong back line and great goalkeeping.  I think we’re going to be just as good as we’ve been in the past and maybe even better down the road, in how we defend and keep teams out of the goal.”

The Crusaders (0-0-1) look to build off of this result, as the team is back in action this Sunday (September, 1), to take on the North Florida Ospreys.  The contest is scheduled for a noon kickoff.  While live stats for the game will not be available, fans can keep up with all of the action by following @VUMSO on Twitter.