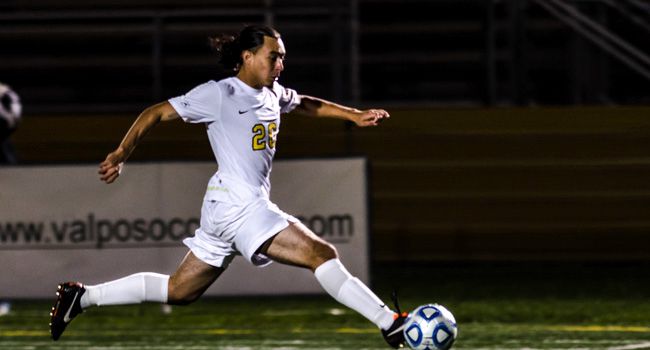 With little turnover between games, the Crusader men were back in action Sunday afternoon to take on the North Florida Ospreys.  Having played 110 minutes in hot, humid Jacksonville weather on Friday night, the Crusaders again found themselves going the distance in the hot Florida weather, as the two teams played to a 1-1 draw.

“First off, we want to congratulate North Florida on getting a result today and collecting their tournament championship with the tie,” said head coach Mike Avery.  “It was a hard game for us - the heat and humidity and having played heavy minutes on Friday night made it a difficult challenge for our guys.”

Taking advantage of the heavy legged Crusaders, the Ospreys went up in the 16th minute of play as Alex Morrell was able to make his way through the Valpo defense and find the back of the net.  Heavy legs or not, the Crusaders put themselves in a tough spot early on in the game.

Being a team that has already overcome tough challenges in this young season, the Crusaders were able to dig in and work themselves in the game.  The rest of the first half saw Valpo take 7 shots, forcing the Osprey goalkeeper to make 4 critical saves.  Aside from giving up the early goal, the first half was played evenly between the two teams.

After surviving a brief scare early on in the second half with an Osprey header hitting the post, the Crusaders settled into the half and put their mark on the game.  Keeping the ball and building through solid possession, Valpo kept the Osprey defense busy; earning 4 corner kicks. The breakthrough finally came in the 76th minute with Julio Velasquez (Albuquerque, N.M./Cibola) scoring his first career goal as a Crusader.  Velasquez picked an opportune time for his first career goal, as his tally leveled the contest at 1-1.

Collecting a ball served into the penalty area, Velasquez showed great skill in controlling the ball and placing it out of reach of a diving Osprey goalkeeper.  Credited with the assist was Todd Vervynckt (Plymouth, Ind./Plymouth) and Jacob Gandarilla (Albuquerque, N.M./Shattuck-St. Mary’s [Minn.]), his first career assist as a Crusader.  Valpo was able to create two additional chances late in the half but were unable to finish either.

With neither team able to break the 1-1 deadlock, the game would be sent into two overtime periods.  Valpo held the better of play in overtime, but were unable to the find the chance that would put them ahead.  The game would end in 1-1 draw, moving the Crusaders to 0-0-2 on the season.

“I thought we played much better today than we did on Friday and I thought in some ways we were a little bit unlucky not to get more out of the game,” said Avery.  “We still need to continue to add some things and keep growing through the season, but these early challenges we faced this weekend will really help us down the road.”

“I apologize to my players and to my staff for letting a referee decision that I didn’t agree with turn into something much more than that.  It was a minor thing that I turned into a major thing.  I am trying to teach my guys discipline and I didn’t show them any in that moment.  For that, I apologize to everyone involved.”