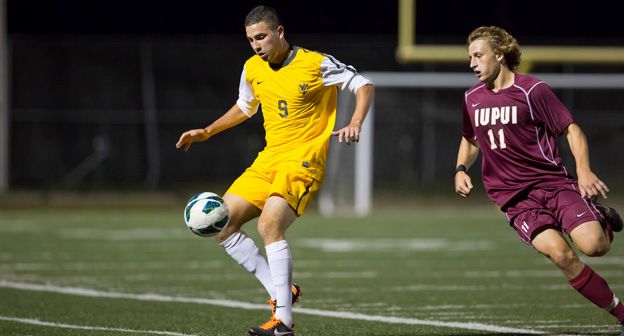 “Congratulations to Wright State on a well-earned win tonight,” said head coach Mike Avery.  “They brought great energy into the game and by the time we were able to match them, we were already playing from behind.  The Horizon League is a competitive league, and these games have a different feel.  We have a lot of new players, and I think as a group we are still learning that there is very little room for error.  The good news is that we were terrific in the second half, but it was too little too late.”

An early mistake in the Crusader midfield led to Wright State scoring in the first five minutes of the game.  The Raiders were able to collect the ball in a dangerous area and serve it into the penalty area.  Crusader goalkeeper Tom Serratore (Tinley Park, Ill./Andrew) did well to make the initial point blank save, but the rebound would fall to  Brett Elder who was able to finish the second attempt giving the Raiders an early 1-0 lead.

The rest of the half would see fairly even play, as the Crusaders were able to create several chances of their own.  The best chance in the first half for Valpo came from a corner won by Yannick Iwunze (Paris, France/Hightower [Tex.] H.S.).  The Crusaders were unable to convert however, as a header from Todd Vervynckt (Plymouth, Ind./Plymouth) was wide of goal.  With just under ten minutes left in the half, a loss of possession from Valpo led to a second goal from Wright State.  An early ball found Elder who was able to serve the ball into the six yard box from just outside the penalty area.  Michael Hayes was able to finish the serve to put the Raiders up 2-0.

The second half would have a completely different feel from the first half, as the Crusaders looked very sharp early on.  The Crusaders set the tempo in the second half by controlling the midfield and connecting passes.  Quality possession from Valpo led to an abundance of chances.  The Raiders were rarely able to play out of their own half for much of the second half.

Valpo was able to build and serve dangerous balls into the penalty area repeatedly.  The Crusaders won multiple corner kicks but were unable to find goal.  Twice, balls served in from the corner would bounce inside the six without a Crusader able to provide the final touch necessary to bring the team back to within one goal.

Perhaps the best Crusader chance of the game came from Jordan Aidoud (Lyon, France/CEFAM).  A combination between Aidoud and Charles Barden (Cedar Rapids, Iowa/Linn-Mar) inside the Raider penalty area led to Aidoud hitting a ball that was sure to find goal had the Raider goalkeeper not made a fantastic save.  The Crusaders would spend the rest of the game creating similar chances that would go unfinished.

“The college season is so compacted that you don't have even a second to dwell on what is behind you, so we have to put this behind us quickly and get ready to face a very good Dayton team on Monday night,” said Avery.

The Crusaders (3-2-3, 0-1-1 Horizon) stay in Dayton, Ohio for a Monday night matchup against the University of Dayton Flyers.  The Crusader men will look to hand the #19 Flyers (7-0-0) their first loss of the season.  Kickoff is scheduled for 6 p.m. CT.  Live stats for the game will be available through ValpoAthletics.com.