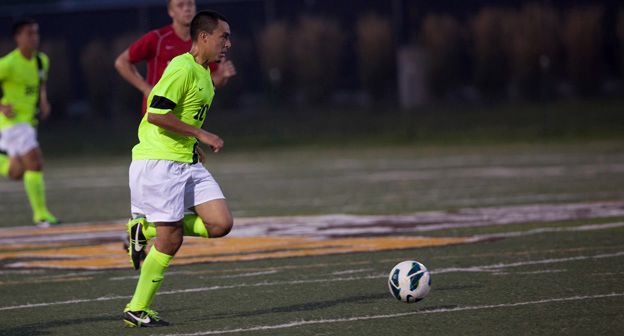 Despite creating the best chances and having the better of play for much of the game, the Crusader men played to a 0-0 double overtime draw in their Horizon League game at Green Bay. With the draw, the Crusaders were able to leave the game with an important league point on the road.

“In some ways, today was a typical Horizon League game in that the match was very competitive and hard fought by both teams,” said head coach Mike Avery. “Both teams probably feel like they could have taken all three points. From our point of view, we had three of the best chances on the day, and had we taken any one of the three, the ride home would be a lot easier. Yannick Iwunze got in one on one in the first five minutes of the game, Jesse Ortiz went on a great solo run in the second half, and freshman Kevin Klett nearly won the game with a golden goal in the first overtime,” said Avery. “All three chances were either saved or tackled away at the last gasp. When you don't convert your opportunities to score, it is inevitable that you'll have to survive some things thrown at you, and we did have to fend them off in the second OT to preserve the result.”

The Crusaders wasted no time putting pressure on the Phoenix defense in Saturday’s league game, as Yannick Iwunze (Paris, France/Hightower (Tex.) H.S.) found himself with a one on one opportunity in just the 5th minute of the game. The right back collected the ball at midfield and was able to carry it all the way into the Phoenix penalty area. With seemingly just the goalkeeper to beat, Iwunze fired a shot that was blocked at the last minute by a recovering Phoenix defender. The goal saving tackle put in by the defender resulted in a Crusader corner, but the chance would be left unfinished. Just moments later, the Crusaders found themselves with another opportunity to take an early lead in the match, as Jesse Ortiz (Aurora, Ill./West Aurora) had the Phoenix goalkeeper scrambling on an effort that went just wide of the far post.

The second half of play would be very similar to the first - the Crusaders held possession for long stretches of the game and created plenty of chances to end the draw, but were unable to convert. In the 52nd minute, Todd Vervynckt (Plymouth, Ind./Plymouth) was able to beat a Phoenix defender and cut the ball inside on his right foot near the top of the penalty area; his shot however would rise just over the crossbar, keeping the game level at 0-0.  In the 69th minute, a run from Ortiz seemed certain to put the Crusaders up a goal to none, but the Phoenix goalkeeper was able to come up with a save to keep the match even at 0-0.

With regulation ending in 0-0, overtime would be necessary to decide the result of the game. Again, the Crusaders would leave quality chances unfinished in the first period of overtime. In his first appearance of the season, freshman Kevin Klett (Muncie, Ind./Burris) was unlucky not to end the match on a golden goal. A fantastic strike from Klett forced the Phoenix goalkeeper to produce yet another game saving stop.

In the second overtime period, the Crusaders were able to withstand several chances from Green Bay. The most pressing came in the 107th minute, as Tom Serratore (Tinley Park, Ill./Andrew) was called upon to make a diving save on a ball headed for the top corner. Serratore’s save preserved the draw and allowed the Crusaders to leave the game with an important league point.

“Despite wanting more out of the game, I am very proud of the effort my team puts in every day,” said Avery. “We are big boys and Division I soccer is a big boy sport, so we have to set aside any frustration, be mature, and turn our focus toward the next task.  For us, that is training tomorrow to prepare for Tuesday night in Chicago against Loyola.”

Although the Phoenix outshot the Crusaders 17-8 in the match, nearly every effort came from long range and was easily dealt with by Serratore and the Crusader defense. Serratore ended the game with five saves. Vervynckt, Klett, Zev Taublieb (Malibu, Calif./Agoura), Nick Suker (Downers Grove, Ill./South), Eric Nieto (Fort Lauderdale, Fla./Louisville (Ky.) Collegiate), and Omar Lawrence (Kingston, Jamaica/Excelsior) each had one shot for the Crusaders, while Ortiz had two with one on frame. With the draw, the Crusaders now sit at 3-3-4 on the season and 0-1-2 in Horizon League play.

The Crusader men are back on the road this Tuesday, as the team travels to Chicago to take on former Horizon League foe Loyola (3-6-0). Kickoff is set for 7 p.m. CT. Live stats for Tuesday’s match will be available through ValpoAthletics.com.